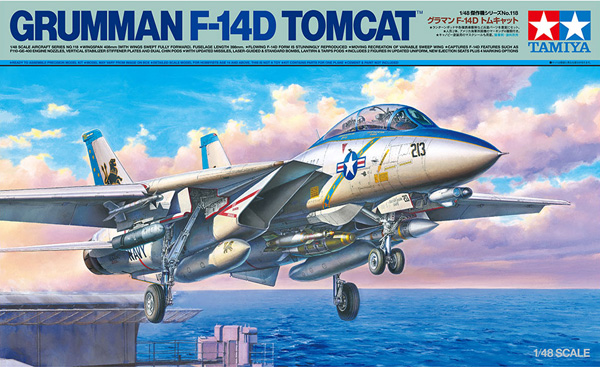 A note from geoff C…
Here are a couple of photos of Dave’s completed duo – impressive or what?!

So, let’s see and hear your story – over to you Dave… 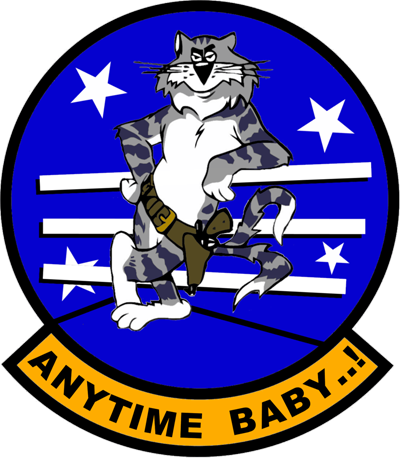 The base kit will be the new Tamiya F-14D Tomcat with some aftermarket extras which I’ll list after this. Just a couple of observations on the kit whilst I’m talking about it. It’s not unsurprisingly based around Tamiya’s earlier F-14A release with some extra sprues. These add the following parts to the kit:

It’s worth noting that some of the earlier ‘A’ model parts have been removed from the kit, the most obvious being the TF30 engine exhaust but the earlier ejection seats along with the cockpit components are still included. What this does mean is if you can source an aftermarket chin pod and, if required, the wing vain ECM antennas you can make a ‘B’ model from this kit.

The final variant of the F-14 was the F-14D Super Tomcat. The F-14D variant was first delivered in 1991. The original Pratt & Whitney TF30 engines were replaced with General Electric F110-GE-400 engines, similar to the F-14B. The F-14D also included newer digital avionics systems including a glass cockpit and replaced the AWG-9 with the newer AN/APG-71 radar. Other systems included the Airborne Self Protection Jammer (ASPJ), Joint Tactical Information Distribution System (JTIDS), SJU-17(V) Naval Aircrew Common Ejection Seats (NACES), and Infra-red search and track(IRST).

The GE F110-GE-400 engine provided increased thrust and additional endurance to extend range or to stay on station much longer. In the overland attack role this gave the F-14D 60 percent more striking range or one-third more time on station. The rate of climb was increased by 61 percent. The F110’s increased thrust allowed almost all carrier launches to be made in military (dry) power. While this did result in fuel savings, the main reason not to use afterburner during carrier launches was that if an engine failed the F110’s thrust in full afterburner would produce a yawing moment too abruptly for the pilot to correct. Thus, the launch of an F-14D with afterburner was rare, while the F-14A required full afterburner unless very lightly loaded.

Although the F-14D was to be the definitive version of the Tomcat, not all fleet units received the D variant. In 1989, Secretary of Defence Dick Cheney refused to approve the purchase of any more F-14D model aircraft for $50 million each and pushed for a $25 million modernisation of the F-14 fleet instead. Congress decided not to shut production down and funded 55 aircraft as part of a compromise. A total of 37 new aircraft were completed, and 18 F-14A models were upgraded to D-models, designated F-14D(R) for a rebuild. An upgrade to the F-14D’s computer software to allow AIM-120 AMRAAM missile capability was planned but was later terminated.

While upgrades had kept the F-14 competitive with modern fighter aircraft technology, Cheney called the F-14 1960s technology. Despite an appeal from the Secretary of the Navy for at least 132 F-14Ds and some aggressive proposals from Grumman for a replacement, Cheney planned to replace the F-14 with a fighter that was not manufactured by Grumman. Cheney called the F-14 a “jobs program”, and when the F-14 was cancelled, an estimated 80,000 jobs of Grumman employees, subcontractors, or support personnel were affected. Starting in 2005, some F-14Ds received the ROVER III upgrade.