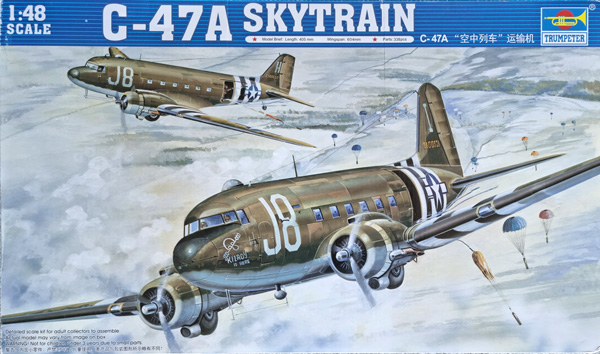 A note from Geoff C…
It’s great to welcome back Richard S who builds the Trumpeter quarter scale C47 A Dakota as the historic and airborne legend ‘Night Fright’ 42-100521 for the Night Fright Restoration Project.
Here’s a look at how it all turned out… 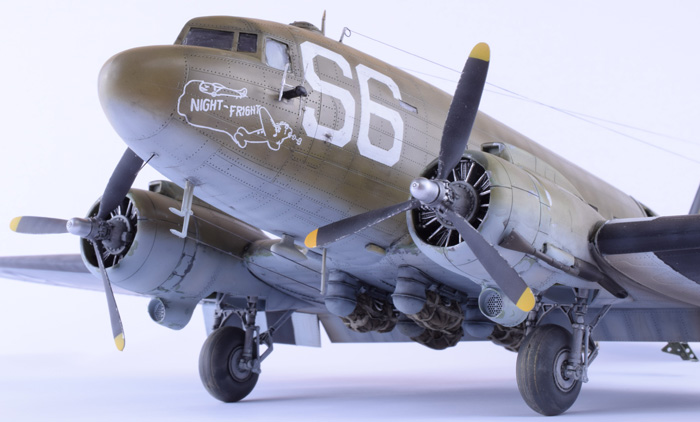 ‘Night Fright a Douglas C-47A Dakota started life in October 1943 in California as 65-DL, “DL” signifying that she was built at the Douglas Long Beach plant. After acceptance by the USAAF with serial number 42-100521 she was ferried east to prepare for overseas assignment. Once this was completed the aircraft was assigned to the 436th Troop Carrier Group’s (TCG) 79th Troop Carrier Squadron (TCS) with a crew consisting of; Lt. William K. Watson, pilot, who flew her throughout his time in the European Theatre of Operations, with Lt. Frank P. Bibas temporarily acting as Co-pilot and Lt. Arthur E. Thornton as Navigator.

The aircraft departed the United States for England along the Southern Ferry Route stopping at, Puerto Rico, British Guyana, Brazil. The journey continued on to Recife’s Iburia Field where they prepared for the long crossing to Ascension Island which they reached around New Year’s Day 1944. Liberia was the first destination on the East side of the Atlantic before flying on to Dakar then Marrakesh before flying across the Bay of Biscay and on to St. Mawgan in Cornwall. The aircraft and crew arrived at their new ‘home’ of Bottesford, Nottinghamshire on the Jan 7th 1944 as part of the US 9th Army Air Force’s newly created Troop Carrier Command. Assigned to the 53rd Troop Carrier Wing, the 436th TCG composed of the 79th TCS, 80th TCS, 81st TCS and 82nd TCS

On the 19th of April 1944, 2nd Lt James H Hardt arrived from the US and was assigned to the 79th TCS becoming Bill Watson’s Co-Pilot in ‘Night the aircraft.. Hardt would fly as Co-Pilot with Bill Watson for the majority of the war and became very good friends. It was around this time that all of the 436th C-47’s would have a squadron code painted on both sides of the fuselage just aft of the cockpit, 79th TCS coded ‘S6’, 80th TCS coded ‘7D’, 81st TCS coded ‘U5’ & 82nd TCS coded ‘3D’. Each C-47 within each squadron would also be given an unique tail letter (radio call sign). 42-100521 was given the tail letter D for Dog which it kept for the remainder of the war. Prior to D-Day the aircraft gained the nose art of ‘Night Fright’, a play on words from Antoine de Saint–Exupéry’s book ‘Night Flight’ which was a favourite of Bill Watson.

The 101st Airborne Division paratroopers of the 1st Battalion 502nd Parachute Infantry Regiment (PIR), the 377th Parachute Field Artillery Battalion (PFAB) and a detachment of the 326th Airborne Medical Company (AB Med Co) arrived at Membury in late-May to make their preparations for their part in the Invasion. 3rd of June orders were issued for the ground crews and any available flight crews to paint black and white stripes on the rear fuselage and wings of all the Group’s aircraft. To avoid fratricidal incidents, the D-Day planners called for ‘invasion stripes’ to be painted to identify Allied aircraft. So a simple order – ‘if it ain’t got stripes, shoot it down’ – could be given out to Allied gunners and pilots.

The 436th was assigned to fly two serials into Normandy on D-Day. Serial #9 consisting of the 79th and 82nd TCS would carry 1st Battalion 502nd PIR whilst the 80th and 81st TCS would fly Serial #10 carrying the 377th PFAB and the 326th AB Med Co. Due to the heavy loads required to be carried for the 377th PFAB which included their field guns and ammunition, the 85th TCS from the 437th TCG over at Ramsbury airfield was sent on detached service to the 436th and assigned as a third squadron in Serial #10. On the planned departure day of the 4th of June, the weather forced a 24 hour delay, meaning that Operation Neptune finally went ahead on the 5th. Para-packs were assembled ready to load on to the six racks beneath each aircraft. The packs contained parts of the broken-down field guns, ammunition, explosives, firearms and other equipment. Other packs including the howitzer wheels were loaded into the aircraft ready for the troopers to push out when the green light was turned on over the DZ.
On the 5th of June, shortly before departure for Mission Albany, General Eisenhower and 101st Airborne Division Commander General Maxwell Taylor visited Membury and the troops who were about to embark on the great crusade. Eisenhower visited all five airfields of the 53rd TCW that day to rally the troops but when he saw the blackened faces and the number of weapons and knives each paratrooper carried, he knew that the Screaming Eagles were itching for a fight.