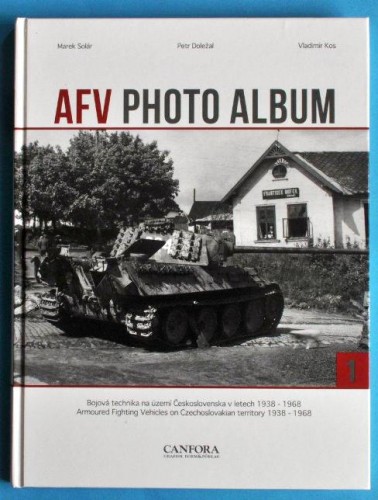 This is another book from Canfora which is a little bigger than A4 size, printed on good quality glossy paper and 224 pages in length.

As this volume is a Photo Album, it has copious black and white photographs from the Second World War, pre-war photos of the Czech army, post war exercises with Cromwell tanks and both black and white and coloured pictures from the 1968 Operation Danube, the invasion of Czechoslovakia.

Of note is also a section on US forces west of the demarcation line with photos of equipment and the crews. This is followed by ten pages of colour plates of some of the vehicles covered from all periods of the book.

Of particular note are the captions to each photograph which have the subject, date, description and who took it.

The photographs are very good, for the most part being clear and offer a good selection of the types used by the protagonists.

Only official German documents were used for the data, which was used to explain the role of the German armoured units in its struggle in the last months of the war against a superior force.

To paraphrase the book:

“The events during the final stages of the conflict in central Europe during the spring of 1945 are little known to the majority of the west. They are shrouded in mystery with very little information available to the majority of the English speaking world. This book is designed to remedy that. A tremendous amount of effort has been expended to ensure that the vehicles in the photographs are correctly identified and that the captions include useful and accurate information to both the modeller and the historian.”

I have read this book and dipped into it several times since as I have found other points of interest.

The photos and the colour plates are very good, as is the book as a whole as it has things of interest for the modeller and historian covering the Germans, Soviets, Americans as well as the Czechs.

N.B. Thanks to Justin at Avid Reader for the loan of the book to review.