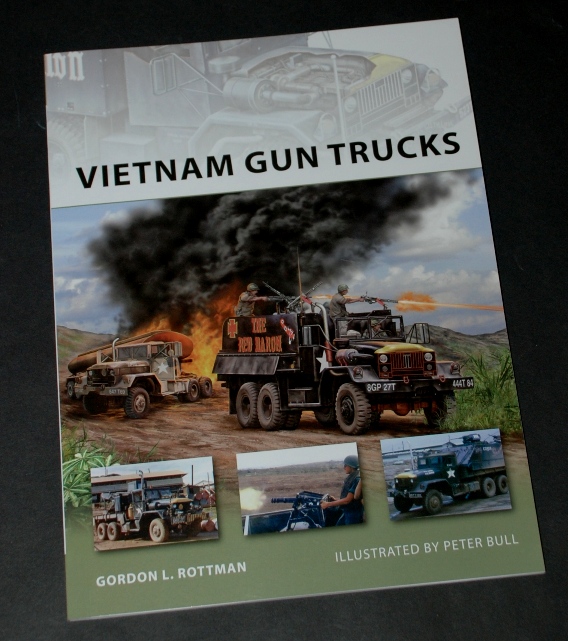 The book is in the standard Osprey format and has 48 pages, with a mix of both colour and black and white photographs.

Of interest are the eight pages of colour artwork of the Gun Trucks , two of which are of a single vehicle called “The Eve of Destruction”; these plates give an idea of the development and of course the gaudy paint work applied by the crews.

When I think of the Vietnam War, I think of the troops being air landed by the helicopter and one tends to forget the long supply routes traversed by the convoys from rear area bases to the forward island bases.

The 8th and 48th Transportation Groups were tasked with the job of hauling supplies along the long supply routes, often finding themselves under attack from snipers, mortars, and ambushes by both large and small groups of the NVA.

To solve the problem of these attacks, the crews began to arm their vehicles with MG’s and placed armour and sandbags to help protect them.

This was of necessity a stop-gap measure, but it helped to establish the operational idea and, as the war progressed, more Gun Trucks were used being heavier vehicles, better armour and more weapons, including the 50 cal MG, the mini gun and mortars.

The book is written by a Vietnam veteran and traces the development from the early attempts at defensive measures to the powerful heavily-armoured late war vehicles.

As with most specialist groups, they formed a close knit community and competition to join was fierce. The crews selected only the volunteers who showed a go-getting attitude and of course having to fit in with that particular crew.

This isn’t really my subject of interest, but I really enjoyed it and found the subject matter interesting, informative and very easy to read.

This was a part of the Vietnam conflict I had not really considered and this volume has opened my eyes to some very interesting vehicles and especially the crews that manned them.

For modellers and historians, a list of the vehicle names are included, as well as a further list of preserved and tribute vehicles with their names.

Of note is that only one actual vehicle is restored, which is The Eve of Destruction; a 5-ton M54 of the 523rd Trans Company, 39th Trans Battalion, 26th General Support Group which was returned from Vietnam in 1972.

It is completely restored and is currently on show at the Transportation Corps Museum Ft Eustis Virginia.