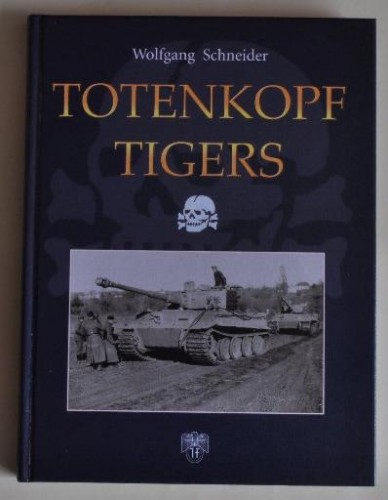 This is another of the Fedorowicz military reference books, which is produced to the usual very high standard with gloss paper throughout. The book comes in at 9.25” x 12.25” with 306 pages and loads of pictures which are accompanied with maps, diagrams, tables and coloured line plates of the tanks.

As the back of the book states:

“Authored by Wolfgang Schneider, one of the foremost experts on WWII armour warfare, Totenkopf Tigers is the history of the Tiger Company of the 3, SS-Panzer-DivisionTotenkopf. In the fall of 1942, a heavy Tiger company was formed for each of the Leibstandarte Adolf Hitler, Das Reich and Totenkopf SS-Panzer-Grenadier Divisions.

“While each of the Tiger companies of the other two divisions was used to form an independent Tiger battalion, the Totenkopf Company remained as a company with its division until the end of the war. It used the Tiger I exclusively, never being issued the Tiger II.”

The photo quality of some of the pictures is somewhat “atmospheric” but one has to realise, as the author says, that during the war we did not have the photo technology of today. Nonetheless I found them perfect to illustrate the story of this unit, from training to its last days, with its surrender to the U.S. forces, who then handed them over to the Soviets. Many did not return from this imprisonment.

This is not a cheap book, but I think it is well worth the cover price for the story of this Battalion, who fought exclusively on the Eastern Front and the men who crewed and serviced the Tiger. It was good to see pictures of the maintenance crews as well as the other services and to read their stories in the text.

The book will be of use to both the historian and modeller alike, as in the text are the actions, not only the combat but the mundane day-to-day stuff away from the Front, which could add more realism to the armour and figure modellers’ work.

One touch I did like was the numbering of the tanks and especially the Panzer three, which had their first digit painted over with yellow paint before handing them to another unit, covered in the text and the colour section.

The photographs of the personnel are also very interesting for the uniform detail and the use of the “cook house” as a place to be snapped in, as a lot of the pictures are based here. Like all service men, the cook was clearly a person to befriend!

I feel this is a book one will read and re-read as it is an in depth study of the Totenkopf Tiger battalion, which will yield gems of information both from the text and the pictures time and again.

Thanks to Justin Gainham from Bookworld for the loan of the book for review purposes.

N.B. For those not sure about the supplier you will find them at shows under the banner of Avid Reader.