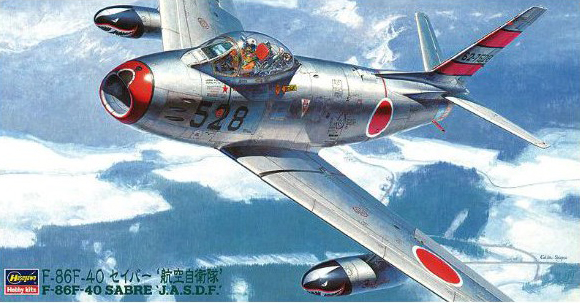 It seems like we are in the middle of an F-86 Sabre Fest! Not only the new Airfix 1:48 Sabre F.4 RAF coming from Adam W-B but of course Dave C’s very nice F-86F-30 Sabre of the U.S. Air Force in the same scale and like Manuel’s Portuguese aircraft, is also from the Hasegawa stable. And that’s completely fine by me – I love the F-86 as I’m sure you do and you’ll find a number of builds of the type in Aircraft Finished Now.

Manuel has kindly sent in photos of his completed model plus a pic of the real thing together with an interesting back story for the type in Portuguese service. There aren’t any build up photos but it would be a shame to only have Manuel’s model in the Subscribers’ Gallery and so it’s all here as a short feature article – I’m sure you will enjoy what follows and it’s nice to see a model of the F-86 Sabre in ‘different’ markings. 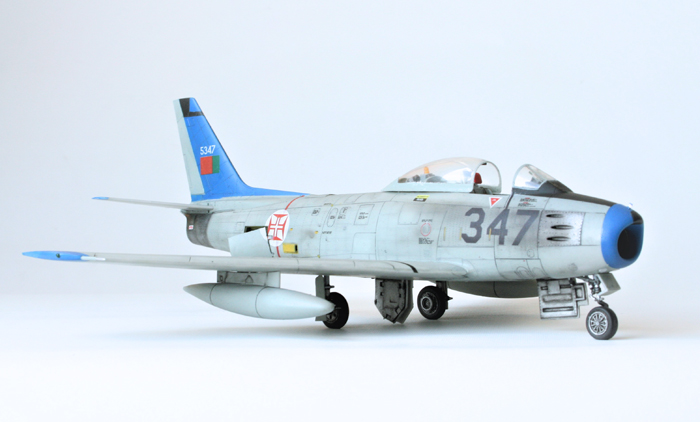 Over to you Manuel…

THE F-86-F SABRE IN PORTUGAL

On August 25, 1958, the first North American F-86F Sabre of the Portuguese Air Force (FAP) landed at Air Base N° 2 (BA2), Ota. They were part of a shipment of 30 (later 50) planes that were successively received, the last ones arriving in October of that year. They were the first FAP supersonic planes, as well as the first with arrow wings.

They were destined for Squadron 50 of Air Base No. 5 (BA5), Monte Real, temporarily placed on BA2, immediately adopting the name “Falcões” and the color blue.

The “Falcões” began flying in September 1958 and on September 24, 1958, a Portuguese military aircraft crossed the sound barrier for the first time.

The FAP F-86F Sabre were painted grey with a red Cross of Christ on a white circle, on the extra-back of the left wing, on the inside of the right wing and on both sides of the fuselage.

The registration number was painted on the wings in black, alternating with the insignia. On the sides of the vertical stabilizer, the national flag, without shield, had the number plate on top, in four black figures.

In the front section of the fuselage, the last three digits of the registration number were displayed, in black. The nose and vertical stabilizer were painted in the colors of the squadrons: Squadron 51 in blue and Squadron 52 in red.

In 1961, problems began to arise in the Portuguese overseas provinces. Given the great strategic importance of Guinea and fearing that Guinea-Conakry would use its MIG-15 and MIG-17 in support of the guerrillas – which never happened – a BA5 detachment was constituted in August 1961 in BA12, Bissau , composed of eight F-86F planes, which took off from Air Base N° 6 (BA6), Montijo, on August 9, 1961. With stops in Gando (Canary Islands) and Sal Island (Cape Verde), they landed in Bissalanca on the 15th, spending 6 hours and 10 minutes of flight covering the 3,800 km of route. It was the longest trip ever made by the Portuguese F-86 Sabre.

Meanwhile, NATO and the United States raised problems with the use of aircraft in Africa, demanding their return to BA5, with the argument that they could not be diverted from their integration into the NATO Forces. Thus, BA5’s deployment in Guinea ended in 1963. The planes were transported to Portugal by sea.

At this time, some Canadair CL-13B Sabre Mk6 aircraft (a Canadian version of the American F-86 Sabre) were delivered to the FAP coming from the German Air Force. As they were equipped with engines that had great differences in relation to those existing in Portugal, they were never assembled. Nevertheless, they helped the to recover of some F-86Fs, providing compatible parts and equipment. 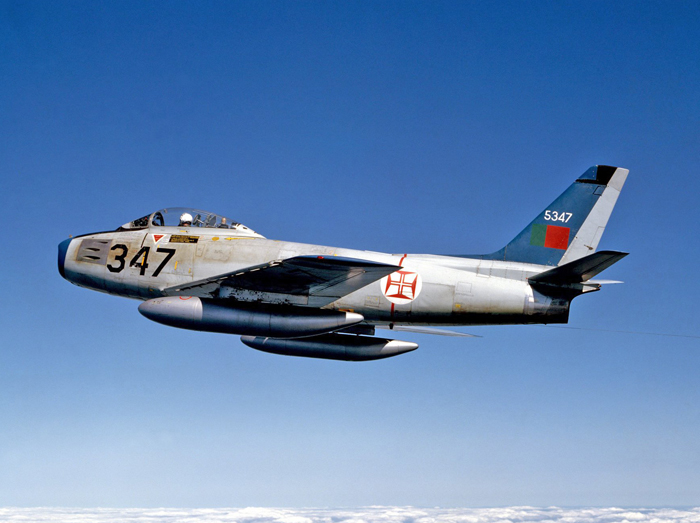 On April 25, 1974, only about 25 F-86Fs survived. The restructuring carried out at FAP then extinguished the 501 Operational Group and its respective squadrons, while the 51 Operational Group was formed with the 201 Squadron, “Falcões”, where the F-86F Sabre were placed, and the 103 Squadron, with the Lockheed T-33 T-Bird, “Caracois”.

The Air Museum received seven North American F-86F Sabres. On the BA5 is aircraft number 5320 in static display and 5301 on a pedestal.