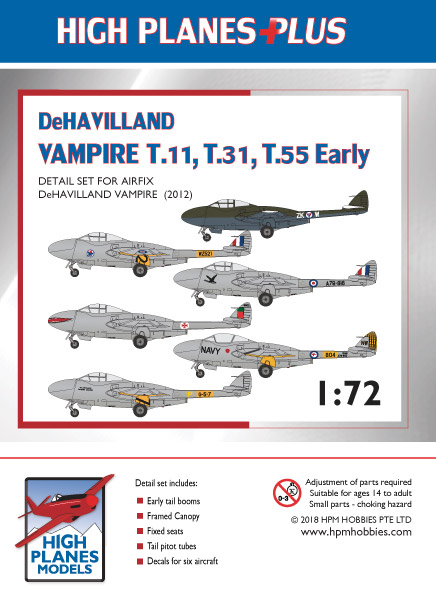 Thanks to High Planes Models for supplying the review sample and donor kit.

The de Havilland Vampire is a British jet fighter developed and manufactured by the de Havilland Aircraft Company. It was the second jet fighter to be operated by the RAF, after the Gloster Meteor, and the first to be powered by a single jet engine.

Work on the Vampire commenced during 1941 in the midst of the Second World War; it was initially intended as an experimental aircraft, albeit one that was suitable for combat, that harnessed the groundbreaking innovation of jet propulsion. Out of the company’s design studies, it was quickly decided to settle on a single-engine, twin-boom aircraft, powered by the Halford H.1 turbojet engine (later produced as the “Goblin”). Aside from its propulsion system and twin-boom configuration, it was a relatively conventional aircraft. Despite being originally ordered as an experimental aircraft only, during May 1944, it was decided to mass-produce the aircraft as an interceptor for the Royal Air Force (RAF). During 1946, the first production Vampire entered operational service with the RAF, only months after the conflict had come to an end.

The Vampire quickly proved to be an effective aircraft and was adopted as a replacement for many wartime piston-engined fighter aircraft. During its early service, it was recognised for accomplishing several aviation firsts and various records, such as being the first jet aircraft to traverse the Atlantic Ocean. The Vampire remained in front-line service with the RAF up until 1953; after this date, it was progressively reassigned to various secondary roles, such as ground attack missions and pilot training operations, for which specialist variants of the type were produced. During 1966, the Vampire was officially retired by the RAF, having been withdrawn from its final role as an advanced trainer after having been replaced by the Folland Gnat. The Royal Navy had also adopted the type as the Sea Vampire, a navalised variant suitable for operations from its aircraft carriers. It was the Royal Navy’s first jet fighter.

De Havilland initiated a private venture night fighter, the DH.113 intended for export, fitting a two-seat cockpit closely based on that of the Mosquito night fighter, and a lengthened nose that accommodated an AI Mk X radar. An order to supply the Egyptian Air Force was received, but this was blocked by the British government as part of a general ban on supplying arms to Egypt. Instead, the RAF took over the order and put them into service as an interim measure between the retirement of the de Havilland Mosquito night fighter and the full introduction of the Meteor night fighter. Removal of the radar from the night fighter and fitting of dual controls resulted in a jet trainer model of the aircraft, the DH.115 Vampire which entered British service as the Vampire T.11. This trainer variant was built in large numbers, both for the RAF and for export.

To improve lateral stability the twin boom tails were modified with extended fillets at the base of the tail leading edges, replacing the early bullet fairings.

The addition of ejection seats required a simplified canopy to allow safe egress.