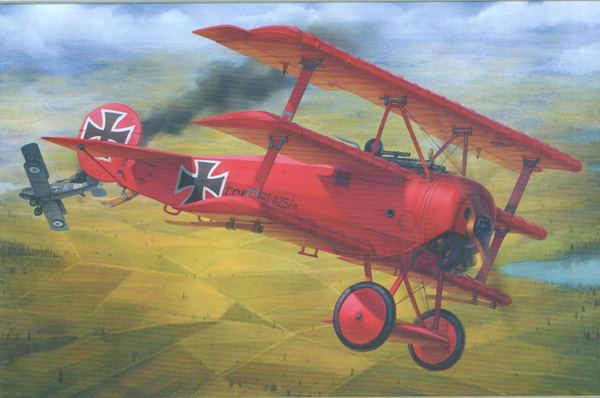 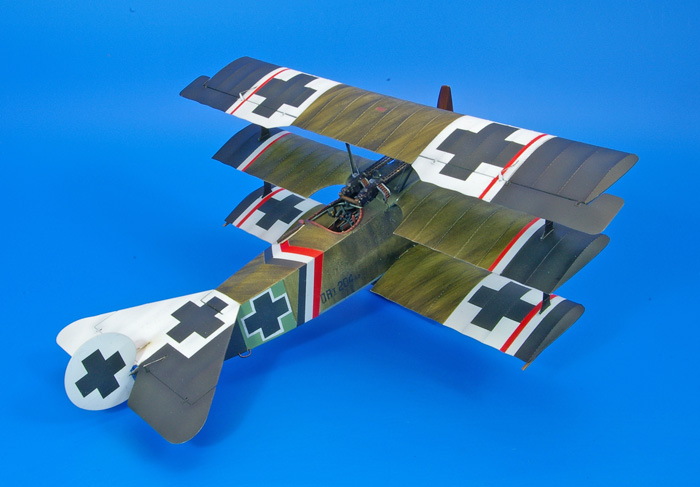 An in-box review of this kit can be found in the Here Now section of Scale Modelling Now.

At the time of writing, the Wingnut Wings website is still available online and this contains some useful detail photographs of the Dr.1. Another useful resource is the fokkerdr1.com website put together by Lloyd Leichentritt.

I must admit that when I first saw this kit, I had mixed feelings about it. I believe the Chinese company Meng had moulded some of the recent Wingnut kits and was pleased that after the sad demise of Wingnut Wings, Meng had continued with the production of this particular kit. However, on closer inspection it seemed that there were several problems (at least with my example) with broken and warped parts and a set of instructions that I felt could have been more helpful.

However, the Fokker Dr.1 is one of my favourite aircraft and, flaws or not, I was very eager to start building the kit.
The Dr.1 sported some interesting colour schemes. I decided to go for one of the more flamboyant and model an aircraft flown by Paul Baumer who was part of the famous Jasta Boelke. This aircraft (Fokker Dr.1 204/17) seems to have been painted and repainted several times in its service career and luckily Montex produces two sets of paint masks covering both the early and late colour schemes.

Both sets of masks were designed for the Roden kit of the Dr.1, but I believed that they would work perfectly well for the Meng kit.

I thought that there were some inconsistencies and / or errors in the instructions provided with the Montex masks. 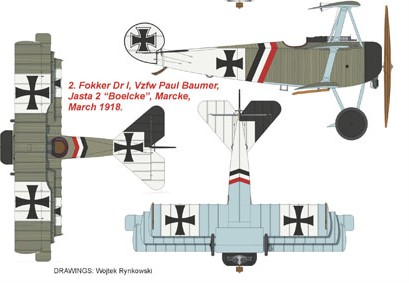 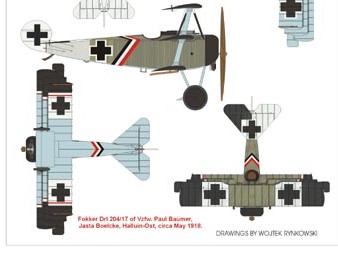 In 1918 an order was issued to convert the iron cross shaped national markings to straight sided crosses. This seems to have been done at a unit level in a number of ways. On Baumer’s aircraft the original crosses were repainted by joining the tips with straight lines resulting in rather thick black crosses. According to the Windsock Datafile on the Fokker Dr.1, after the crosses had been converted to the straight sided version the extra cross on the tail of 204/17 was ordered to be overpainted. However, there is no mention of what happened to the extra crosses on the upper surfaces of the lower wings.

This was all starting to get a little confusing and I thought that without a comprehensive set of clear photos of the aircraft throughout the war I needed to make some educated guesses based on the available photos and reference material.

I decided to model the aircraft as it might have appeared later in its career, after the large late style crosses had been applied and before the extra crosses were painted out assuming the extra lower wing crosses were converted as well. I also assumed that the standard black and white Jasta Boelke markings were applied to the lower surface of the tail and the underside of the fuselage and that the extended white patch on the underside of the tail as shown in the Montex instructions for the early scheme was never present.

I may be wrong here, and there may be some experts on the Dr.1 out there who will dispute some or all of this, but it all seemed logical to me. With these decisions made I could finally get on with some work!