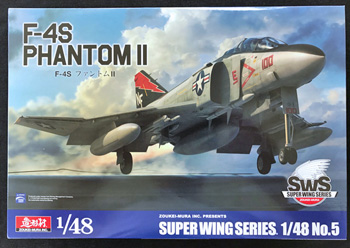 And… here is a photo of Alan’s beautifully finished F-4S – love the heavy weathering often seen on the type – nice work Alan.

The McDonnell-Douglas F-4 Phantom family, was originally developed for the US Navy by McDonnell aircraft, entering service in 1960. One of the most iconic aircraft of all time, it served in frontline service with the US until 1996, a further 20 years until 2016 as a drone and still in service in various countries today.

The Phantom first saw service in Vietnam where it served as the main air superiority fighter of both the USAF and USN, and continued to form the majority of US military air power until replaced by more modern aircraft such as the F-15 & F-16 by the air force, and F-14 & F-18 in its naval role.

In modelling terms, this aircraft has been represented in many forms over the years- the 1:32 Tamiya & 1:48 Hasegawa versions of the kits being the standouts amongst the various early renditions.

Academy first released their 1:48 F-4B in late 2012 and in various guises since, following up on the B with D/N and J releases. Eduard have re-boxed these kits and added several photo etch and resin enhancements, in the form of the Good Morning Da Nang, Good Evening Da Nang and Rockin’ Rhino kits.

The Academy & Eduard offerings have been popular with modellers across the globe, so it came somewhat as a surprise when Zoukei Mura announced their intentions to release a series of F-4 kits in 1:48. This initially came in the form of the beautiful F-4J kit, which was launched at Telford in 2016, and now in the form of this F-4S.

The Zoukei-Mura F-4S kit plus

When I was asked to build this kit I immediately jumped at the chance and what a stunning kit it is. Out of the box the detail is simply breath-taking. The one change I will be making to it is to add a set of Quickboost resin MB Mk7 ejector seats. As nice as the kit seats are, the Quickboost offerings are beautiful and with their moulded on harnesses will add to the already well detailed cockpit.

The other principal change I will be making is to use markings from Superscale Decals to depict a VX-30 Bloodhounds QF-4S drone. This aircraft will not have the Day-Glo orange areas on the tail or wings, but it is still a very interesting markings scheme. I wasn’t too keen on the single aircraft included in the kit, a VF-161 Chargers aircraft based on USS Midway.

For this project I am intending to finish it all using Hataka paint – I will be using their Orange Line (OL) Lacquer NATO Aircraft Paint Set for the main airframe, and Blue line acrylics for the detail painting. These paints are formulated for brush work, but also airbrush very well. I will also be using various other Orange Line lacquers throughout the build.