Honda CB 750 by Chris Addis
Been nailing a 1:5 scale Tamiya Honda CB 750 together. I always wanted a Hesketh, so I adopted the same colour scheme.

Kawasaki ZZR1400 by David Roberts
Here’s my 1:12 Kawasaki ZZR1400 using the Tamiya kit.
I used Zero Mica blue and Clear; polished with polishing kit and Tamiya compounds; no after parts, straight box kit.
Last time I completed a motorcycle was probably 30 years ago!!
Cheers, David
Lamborghini Veneno by Steve Wiglesworth
The first time that l ever saw the Veneno was only about two years ago and l was surprised to discover it had been built in 2013. Depending on which references you read either 5 or 9 were built, at a price of around 4.5 million dollars! The model shown here is produced by Fujimi and retailed at around £30.

As is obvious by the images, the finished car is the Roadster version whereas the kit is of the roofed version and this meant that a fair amount of scratch building was required. Luckily the kit came with a fair representation of the 6.5 litre V12 engine and the complete rear engine as a separate part.

The first task was to cut the roof off of the main body, this part became very weak and flexible due to the fact that only the sills under the non-existent doors held it together. From here, the kit was built virtually straight from the box; details and colours being found on numerous web sites and You Tube.

Construction of the new lowered engine deck was by using various thicknesses of plastic card and Milliput. The most challenging part was building the twin roll over structures that wrap around the seats. At no time were any sketches or plans drawn, the whole build being done by eye until it looked correct. The central fin and airbox was made in the same way and blended in with filler until smooth.

Many of the You Tube videos show a Veneno in a metallic red colour, so thats what l went for, Tamiya TS-18 as it’s virtually an exact match. The body was spayed outdoors in warm sunshine straight from the can until a smooth finish was achieved. after leaving a week to fully harden, the finished body and doors were attached to the chassis. The final parts to add were the door glazings that meet the windscreen at the A pillars.

This project lasted around 3 months and was the most involved car conversion I have done and I’m pleased with the way it turned out and a thoroughly enjoyable project.

Today it’s time for something different: a Formula 1 car.

This is the 1:20 scale Tamiya Leyton House from the early nineties. The kit was mostly built straight from the box with some extra detailing in the engine compartment.

All black parts are Alclad primer and the exhaust Alclad metal paints. The body colour was painted with a spray can from Tamiya, which is really great stuff. The green and white areas and thin black lines were masked and airbrushed.

Michigan L190 Wheel Loader - Rusty and Dusty - by Tony Thunder
This is the Kit Form Services 1:24 resin kit of the Michigan L190 Shovel Loader built out of the box (although there are scratched elements the materials are supplied).

My intention was to build, paint and weather as a vehicle that had spent its entire working life outside at one location (quarry or such like); serviceable but little regard for cosmetics. (plenty of online references showing vehicles in that state).
Primed and under coated with True Earth rust primer given a couple of coats of AK’s worn effects (I prefer this one because it allows you to wear through the paint colour without knocking off too many large lumps).

Yellow was MR Color acrylic yellow and overall weathering using weathering products and pigments from both AK and Ammo.

Some of its parts are snap parts, but nonetheless this model is a great model to have and it’s my second Peterbilt 359 model.

I used Krylon spray-paints for model kits, as well as Testors enamel paints and marker pens. Some decals came from other truck model kits, mainly from AMT’s Peterbilt 352 Pacemaker model kit. The model was shot in natural lighting with a Nikon D7100 DSLR camera. The interior of the cab is tan, the seats are gloss black and the silver parts were painted using Sharpie’s silver pen.

The model is 1:24 Scale – about 8 inches long. To get the metallic areas: Black undercoat …polished aluminium metallics and hand polishing…which took ages.

This is the Kit Form Services 1:24 resin kit of Tracked Excavator; it is a generic vehicle very similar to a Caterpillar Excavator but different enough to not contravene copyright!

It is a very comprehensive kit, which I built out of the box (although there are scratched elements the materials are supplied).

My intention was to build, paint and weather it as a vehicle nearing the end of its working life but still operational; serviceable but little regard for cosmetics. (plenty of online references showing vehicles in that state).

Primed and under coated with True Earth rust primer and given a couple of coats of AK’s worn effects (I prefer this one because it allows you to wear through the paint colour without knocking off too many large lumps).

Yellow was MR Color acrylic yellow and overall weathering using weathering products and pigments from both AK and Ammo.

Volvo F12 by Barlas Pehlivan
Here’s my model of the Volvo F12 in 1:24 scale made from the Italeri kit. 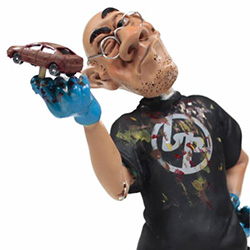 Hope you like it.
Barlas P.
Yamaha R1 Streetfighter by Neil Pepper
The Bike started as a Tamiya kit of the Yamaha R1 with the fairing removed and some new handle bars fitted and a new head light.
The paints used for the tank and other panels are Tamiya Silver then sprayed over with Tamiya Clear Orange and Clear Yellow.
The figure is from the Legend range and painted in oils and Humbrol paints.
Neil P. 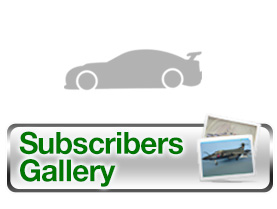