Harriers at Incirlik November 1994 to January 1995
One for the weathering weenies I think! The paint finish is a temporary application known as ARTF (alkali removable temp finish) which I always think of as All Ready to Flake, which is applied by roller on an as required basis. It is very temporary and flying through rain can strip it off the surface. The aircraft is loaded with two long range drop tanks, two side winder missiles and two American Cluster Bomb Units. I suspect we’re using USAF CBU’s for namby pamby politically correct reasons, but I shouldn’t rant on about dipstick politicians! There wouldn’t be enough paper in the world!

The red box on wheels under the rear fuselage is for the safe unloading of the flares, a job the armourers weren’t keen on. The rear fuselage is also pretty grubby, the rear (hot) nozzles run dirty and all the particles stick well to the rough AFTF finish. 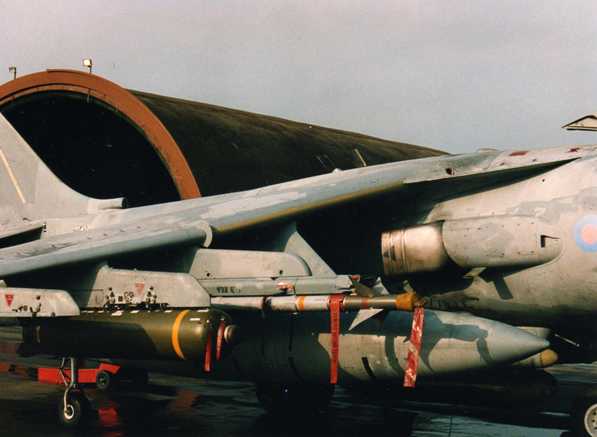 A general view of the armament fit. The outboard wing pylon is unoccupied and then comes the CBU, then the Sidewinder on its BO2 adapter rail. The gloss black head of the BO2 can just be seen between the forward AIM9 fins. This piece of kit analyses incoming radar signals and cuts the `chaff’ carried within the rail to the right size to match the radar frequency. The cut chaff is then ejected from the rear of the BO2 rail, hopefully negating the search radar.

Inboard of the BO2/AIM9 is a drop tank and behind that can just be seen the nose of one of the two gun pods carried. I believe that a recce pod was carried on the centre line pylon between the gun pods, but have no photographic proof. 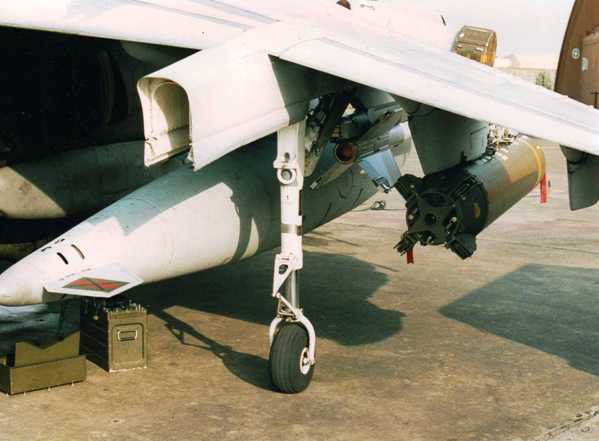 View of the back end of the weapons fit. The complicated back end of the CBU makes me suspect a retardation device to slow the bomb in flight and increase the area the bomblets cover. The rear fins and exhaust of the sidewinder can be seen inboard of the CBU. The curved steel shape directly above the exhaust are the ‘chaff cutters’ which chop the aluminium foil to the required size to deflect and reflect the radar signals from the ground unit.

Inboard of the undercarriage outrigger is a large drop tank. I believe this is closed as a ferry tank and I’m not sure if this is ‘combat rated’. Note no-step marking on the fin.

Inboard of the tank can be seen the rear of the gun pod and just above that can just be seen the hot nozzle.

The green boxes on the ground by the drop tank are test kit for onboard systems, the green box on the wing is possibly the film magazine from the centre line recce pod and the coil wire seen on the ground looking between the CBU and the drop tank is an earthing lead, absolutely essential with armed aircraft around.