They are the 190th Fighter Sqdn (FS) of the 124th Fighter Group (FG) from Gowen Field, Boise, Idaho. Points to note include the fin tip pod containing radar receivers of the AN/APR-47 system, the Idaho ANG colours with just below the ‘medal ribbon’ of a Presidential Unit Citation. The tail of an AIM-7M Sparrow missile can be seen below the wing root. The brake parachute has been used and discarded leaving the cover open just below the fuel dump apertures at the base of the rudder. My main aim was to record all the different hues and brightness of the natural metal areas.

A view of the port forward and central fuselage. Points to note, both AGM-88 HARM (High Speed Anti Radiation Missile) can be seen mounted on the inboard wing pylons with an AN/ALQ 131(V) Electronic Counter Measures (ECM) pod mounted in the port forward Sparrow recess. This is unusual as the AN/ALQ 184 pod, a later model, was usually carried. On the port splitter plate is a `zap’ comprising a HARM taking out a radar with AAA 29th June 93 written below. On the port intake the Presidential Unit Citation `ribbon’ is carried and for those of a masochistic turn of mind all of the holes for the boundary layer control on the rear splitter plate can be counted and added to your 1:72 F4! Lo vis markings are in the `other’ grey (FS 36270 on FS 36118) and vice versa. The white painted interior of the nose undercarriage door can be seen behind a very `beat-up’ boarding ladder. These are big, heavy and awkward and quickly get battered!

Starboard nose and intake. Points to note – three internal mirrors on the pilots canopy frame while the `Bear’ (slang name for the WSO) has two internal and one external mirror on his canopy. The start of the non-slip walkway can be seen on top of the starboard air intake and the `last 4’ of the serial number displayed vertically on the nose U/C door. The scissors link on the nose U/C is offset about 30˚ to port and some of the 52 emitter and receiver aerials of the AN/APR-47 ‘radar and missile detection and launch homing system’ can be seen on the nose U/C door and on the chin gondola. The AN/APR-47 is located in the nose and occupies space available once the Midas-4 cannon had been removed. The small air intake is now used to provide cooling air to all that electronic wizardry. The small red U-shaped cover plate protects a pair of aerials on the chin gondola.

Showing port side of the nose and intake. Points to note – prominent canopy latches and probably more of the rear cockpit instrumentation than they wanted photographed. 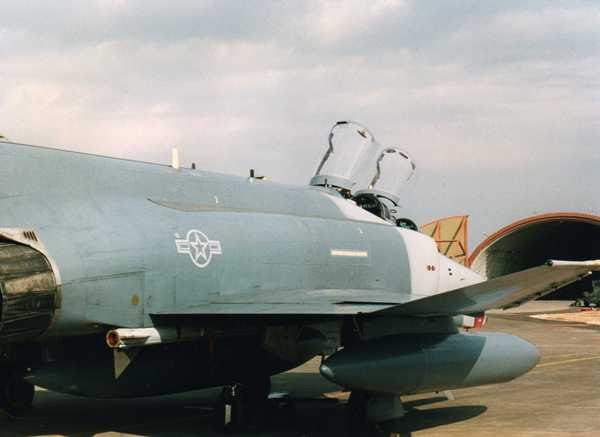 Showing starboard side and wing. Points to note – canopy mirrors, a fine selection of spine aerials, the fuselage non-slip walkway and one of the upper wing flaps (or lift devices) slightly open [not sure about this Neil, ask a Phantom Phreak]. The slatted leading edge on the outer wing and what looks like a starboard nav light at the rear of the wing tip, also a bit more of the rear seat instruments!

Another modelling reference shot of oily bits possibly some paint touch up around the fin leading edge pitot tube and anti-collision lamp. Note the RBF flag on the hook.

Another reference shot showing nose leg RBF flag, protective `noddy caps’ on the HARM missiles and the mounting points for the AN/ALQ 131 pod in the port forward Sparrow bay. There is a different pattern to the nose gondola dark grey painting compared to A/C No 0298 which came further forward.

Another reference shot – shows the small split intake at the forward end of the fin and the 6 aerials on the spine. Looks as though some paint touch up is required just below the `slime light’ on the intake side and a better view of the `shore’ or adaptor that mates the HARM missile to the inner pylon.

All these aircraft were painted in the Hill Grey II scheme, which is popularly known as Egypt I, using FS 36118 dark grey and FS 36270 grey in what is effectively a symmetrical mirror upper to lower surface scheme.