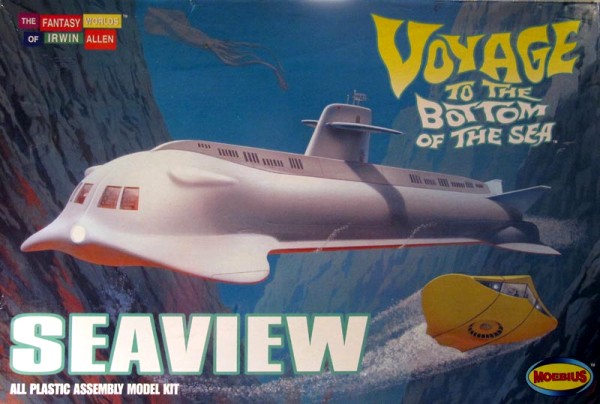 The iconic submarine Seaview is one of the great science fiction vessels of the various Irwin Allen series during the sixties. The sub became popular at a time when there was a great public fascination in nuclear submarine development and ‘starred’ in the film, Voyage to the Bottom of the Sea, and the following TV series of the same name.

What we’re working towards

Here’s a few shots of what we’re building. This review will provide a step-by-step guide of the tools and techniques of how it’s done. Click on the thumbnails to enlarge and see what we’re aiming for.

The build is very simple, if a quick build is desired. A very impressive item can be built quite quickly. If the modeller wishes to go the extra mile and hide all those nasty seams, well, then you have a little more work to do.

The instructions are unusual and leave a little to be desired, but they are adequate.

It is possible to obtain a lighting kit for the interior, whilst also turning the Seaview into a fully operational radio controlled model. If you feel very ‘flush’ with funds, it is also possible to obtain a periscope, which works and allows you to actually see from the model while it operates!

I will be building this kit just from the box, but with the addition of homemade interior lighting and set of decals for the interior, obtained from Paragrafix in the USA.

Quick summary of the Kit

Star rating out of 5

I have wanted to build this model since its introduction a year or two ago, as I was a big fan of the series all those years ago. But it was a conversation with Geoff at the Cosford Model show that put it all into motion.

We know that SMN is a military modelling magazine in the main, but, apparently, there are modellers out there who build items other than military subjects! Shocking I know, but true. [And… the Seaview is a military boat and maritime too – that’s enough for me! – Ed]

In the end, I said that I would like to do ‘a number’ on the Moebius Seaview and so we decided to do just that.

Of course, there is a tenuous military link there anyway, as the Seaview carries 20 ICBM’s of a sort, but it is in the main a scientific vehicle for exploration.