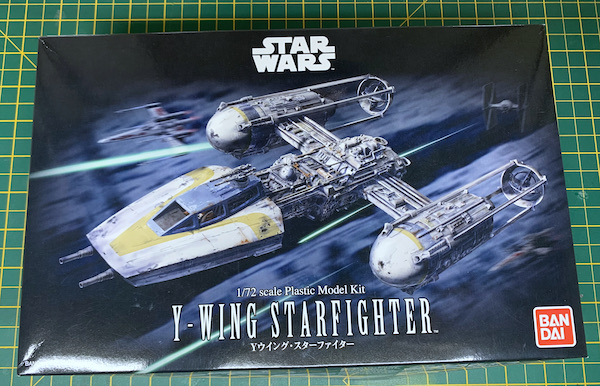 For a full in-depth look at what’s in the box have a look at the In-box browse that Geoff has done.

Just before we get into this project, here’s a quick look at how it all turned out… 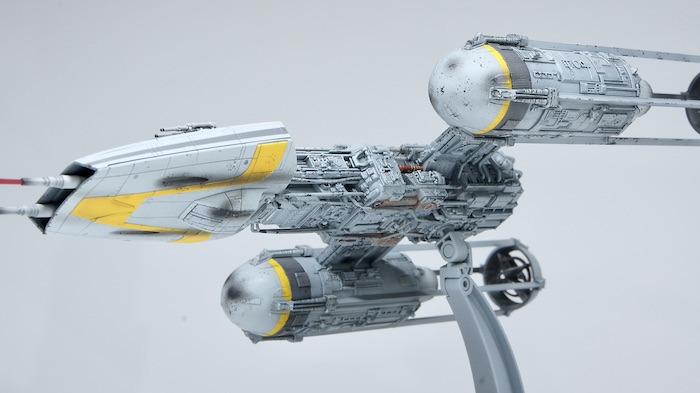 Courtesy of Wikipedia
The Koensayr BTL Y-wing assault starfighter/bomber is a fictional spacecraft from the Star Wars franchise. They are depicted as the primary fighter-bombers of the Galactic Republic, Rebel Alliance, New Republic, and the Resistance; being ideally suited for anti-shipping, close air support, air interdiction, force protection and ground attack missions. Y-wing made their theatrical appearance in Star Wars Episode IV: A New Hope.

In the original Star Wars movie (1977), a group of Y-wings designated “Gold Squadron” took part in the attack on the Death Star. Led by squadron leader Jon Vander (Angus MacInnes), Y-wings made the first unsuccessful “trench run” on the Death Star’s exhaust port, and only one Y-wing would survive the battle itself. Y-wings made a brief appearance at the end of The Empire Strikes Back (1980) when the heroes are reunited with the Rebel fleet, and feature alongside other Rebel starfighters during the climatic space battle of Return of the Jedi (1983).

Y-wings were later seen in The Clone Wars 2008 television series. Here they are depicted as fighter-bombers used by the Galactic Republic in the Clone Wars against the Separatists. General Anakin Skywalker is shown leading a squadron of Y-wings on one of their first missions to take out a Separatist cruiser, where they are noted for their powerful shields and secondary gunner.

Y-wings made their theatrical reappearance in Rogue One (2016), an anthology film set immediately prior to the events of the original Star Wars film. Here the Y-wings of Gold Squadron are shown playing a pivotal role during the Battle of Scarif in disabling an Imperial Star Destroyer with ion torpedoes. Y-wings would appear again during the climax of Star Wars: The Rise of Skywalker (2019).

Based on Star Wars background material, the Galactic Republic commissioned Koensayr Manufacturing to produce the BTL-B Y-wing during the early part of the Clone Wars. Prized for its durability and long-range striking capability, the success of the Y-wing prompted further production of the original model and a number of variants. However, when the war concluded and the Galactic Empire came to power, Y-wings were decommissioned and relegated to military surplus sellers or scrapyards. The Rebel Alliance sought to buy or commandeer as many Y-wings as possible and they became the most readily available starfighters to the Rebellion during the Galactic Civil War. Rebel Y-wings were used to perform a variety of missions including courier, escort and reconnaissance.

The original BTL-B Y-wing features a forward module seating a pilot in the cockpit and a gunner in a bubble turret. An astromech droid (which served as the fighter’s navigation system) fits into a dedicated socket behind them. The module contains the starfighter’s armaments: two forward-firing laser cannons, twin ion cannons in the turret, and a pair of torpedo launchers with six-round magazines capable of launching bombs, cluster missiles and other ordnance. The module connects to two powerful ion engines via reinforced central spar and cross wing, all encased in heavy armour plating. Variants include the BTL-S3, which replaces the bubble turret with a remote-controlled turret and seats the gunner behind the pilot in the cockpit, and the BTL-A4, which removes the gunner altogether and gives the pilot control of the ion cannons.

Once acquired, Rebel technicians modified the fighter-bombers to make them more suitable to the Rebellion’s hit-and-run tactics. Armour plating was removed to save on weight and make it easier to perform maintenance, compensated for by increasing deflector shield power. Various other components were removed or rearranged – such as replacing the six-round torpedo magazines with four-round versions – to lighten weight and increase performance while maintaining overall integrity. The resulting modification makes these Rebel Y-wings faster and more lethal than the original version.