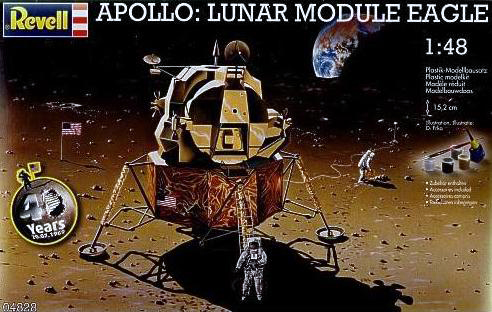 As we approach the 50th anniversary of Neil Armstrong’s Apollo 11 mission to take the first steps on the surface of the moon, what better way to recognise this achievement than to build this famous craft.

The Apollo Lunar Module, or simply lunar module (LM, pronounced “Lem”), originally designated the Lunar Excursion Module (LEM), was the lander spacecraft that was flown from lunar orbit to the Moon’s surface during the U.S. Apollo programme. It was the first manned spacecraft to operate exclusively in the airless vacuum of space, and remains the only crewed vehicle to land anywhere beyond Earth.

Structurally and aerodynamically incapable of flight through Earth’s atmosphere, the Apollo Lunar Module was ferried to lunar orbit attached to the Apollo spacecraft command and service module (CSM), about twice its mass. Its crew of two flew the LM from lunar orbit to the surface and later back to the command module, whereupon it was discarded.

Overseen by Grumman Aircraft, the LM’s development was plagued with problems that delayed its first unmanned flight by about ten months and its first manned flight by about three months. Still, the LM eventually became the most reliable component of the Apollo/Saturn space vehicle, the only component never to suffer a failure that could not be corrected in time to prevent abort of a landing mission.

Of the 25 units built, 10 lunar modules were launched into space. Of these, six landed humans on the Moon between 1969 and 1972. The first two launched were test flights in low Earth orbit—the first without a crew, the second manned to rehearse the docking procedures and flight characteristics. Another was used by Apollo 10 for a “dress rehearsal” flight in low lunar orbit, without landing. One lunar module functioned as a “lifeboat” for the crew of Apollo 13, providing life support and propulsion when their CSM was disabled by an oxygen tank explosion en route to the Moon, forcing the crew to abandon plans for landing.

The total cost of the LM for development and the units produced was $21.3 billion in 2016 dollars, adjusting from a nominal total of $2.2 billion using the NASA New Start Inflation Indices. The six landed descent stages remain intact where they landed; one ascent stage (Apollo 10’s) is in heliocentric orbit. All the other LMs that flew either crashed into the Moon or burned up in the Earth’s atmosphere.

LM-1 was built to make the first unmanned flight for propulsion systems testing, launched into low Earth orbit atop a Saturn IB. This was originally planned for April 1967, to be followed by the first manned flight later that year. But the LM’s development problems had been underestimated, and LM-1’s flight was delayed until January 22, 1968, as Apollo 5.

LM-2 was held in reserve in case the LM-1 flight failed, which did not happen and subsequently became the ‘integration’ test unit for the Saturn V rockets, it now resides in the Smithsonian in Washington DC.

LM-3 now became the first manned LM, again to be flown in low Earth orbit to test all the systems, and practice the separation, rendezvous, and docking planned for Apollo 8 in December 1968. But again, last-minute problems delayed its flight until Apollo 9 on March 3, 1969. A second, higher Earth orbit manned practice flight had been planned to follow LM-3, but this was canceled to keep the program timeline on track.

LM-4 used on Apollo 10 launched on May 18, 1969, for a “dress rehearsal” for the lunar landing, practicing all phases of the mission except powered descent initiation through takeoff. The LM descended to 47,400 feet (14.4 km) above the lunar surface, then jettisoned the descent stage and used its ascent engine to return to the CSM.

LM-13, 14 & 15 never flew as the remaining Apollo programme was cancelled.

All the LMs had differences but we will concentrate on LM-5.