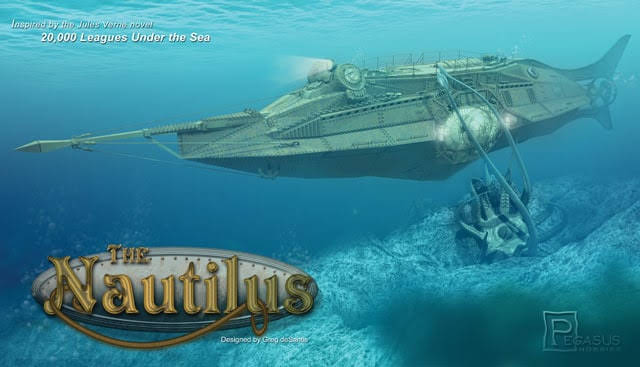 Here’s a quick look at how my Nautilus turned out – hope you like it! 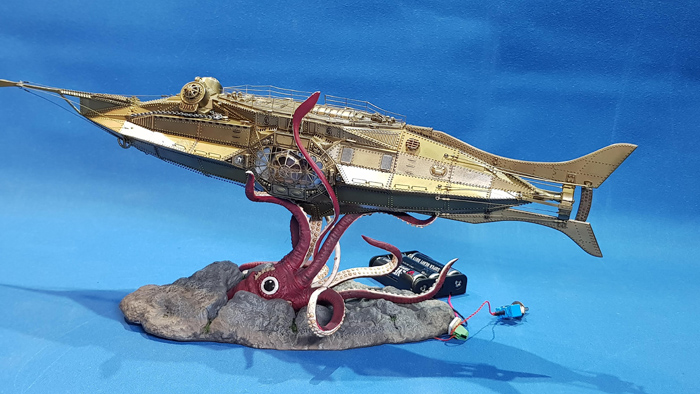 Jules Verne’s Nautilus has appeared in many guises over the years from the original book Twenty Thousand Leagues Under the Seas, modern films such as Journey 2: The Mysterious Island and comics like The League of Extraordinary Gentlemen as well as various computer games and other entertainment formats.

The Nautilus has no definitive appearance other than the basic description in the provided by Verne in his classic tale:-

“Here, M. Aronnax, are the several dimensions of the boat you are in. It is an elongated cylinder with conical ends. It is very like a cigar in shape, a shape already adopted in London in several constructions of the same sort. The length of this cylinder, from stem to stern, is exactly 70 m, and its maximum breadth is eight metres. It is not built on a ratio of ten to one like your long-voyage steamers, but its lines are sufficiently long, and its curves prolonged enough, to allow the water to slide off easily, and oppose no obstacle to its passage. These two dimensions enable you to obtain by a simple calculation the surface and cubic contents of the Nautilus. Its area measures 1011.45 square metres; and its contents 1,500.2 cubic metres; that is to say, when completely immersed it displaces 1500.2 cubic metres of water, or 1500.2 metric tons.”

But this offering by PEGASUS HOBBIES has to be my favourite incarnation.
I’ll be using the after-market photo etch set by Para Graphics and the lighting set by www.tirydiummodels.co.uk

I like the steampunk theme of the Jules Verne book so will try to recreate that in the finish. So enough waffle and on with the build.

So enough waffle and on with the build…