Each submission has a ‘gallery’ of thumbnails which you can click on to see an enlarged image and read the short text describing the model – enjoy!


LATEST: Westland Sea King ASaC7 (AEW2) by Dave Biddlecombe
The original Westland Sea King AEW was developed following the Falklands conflict as the lack of an AEW platform required standing air patrols by Royal Navy Sea Harrier FRS.1’s whilst radar range was limited to that of the Type 42 picket destroyers (Two of which were lost in the conflict H.M.S Sheffield & H.M.S. Coventry). The AEW2, with its swing down radome, proved to be a valuable asset and was further developed into the ASaC7. Following the retirement of the Harrier the need for an AEW platform was reduced, although the ASaC7 was used over Afghanistan, which is no where near the sea! In the modern RN the type has been replaced by the Merlin Crows Nest.

The model is based on Hasegawa’s Westland Sea King AEW2 boxing. The most disappointing thing about this kit is there there is no detail in the rear cabin and both cabin doors are moulded closed! As there are no aftermarket interiors kits in this scale I would be forced to scratch build my own. Using the interior dimensions of the kits cabin and good reference photos I drew up the interior boxes in 2D and cut these out of thin plasticard using a craft robo cutter. The parts were then assembled and detailed using wire, plasticard and ANYZ knobs. Even the tracker ball and keyboard were scratch built. The kit seats were used in the rear cabin and replaced in the front with superior quickboost ones.

The front cabin was detailed using a mixture of eduard and Flightpath etch plus scratch built detail. The extensive Flightpath conversion kit was used to detail the exterior, providing items such as the air filter and winch. If you don’t like using PE, this kit is definitely not for you! A Rotor Craft deflated radome was used as this was better than the one supplied by Flightpath. Blackdog provided resin for the engine and nose electronics bay. I have to say that the resin engine / cover is a work of art and a definite ‘must have’ for anyone building a Sea King. Paint came mostly from the MRP range, which is my favourite paint.

Westland Lynx (Royal Air Force of Oman) By Mick Stephen
This is the Airfix 1:48 scale Lynx kit, depicted as a Royal Air Force of Oman Mk-120 using the basic Airfix kit and Eduard interior and exterior photo etch sets.
Sure, the engine cowls are all wrong, for the sharp eyed among us, but as a commission build for an old Omani friend who served, he’s happy and I can live with it. The Mk-120 export version continues to operate in the mountainous and desert terrain of the Sultanate and is still the fastest helicopter in the Middle-East.
Mick S.
Westland Seaking SAR 5 by Skyboy
I went to Cornwall a few weeks ago for a week’s holiday.
One day I sat on a beach opposite St Ives town and watched a Seaking Helicopter doing some drills about half a mile out to sea; I watched it for about an hour. I thought to myself, I have never ever made one of those.
I have now.!

Westland Super Lynx by Mish Edwards
This is an out of the box build with the exception of some detailing to the sonar station in the shape of some wiring made out of 0.5mm lead wire. I was initially planning to add rivet detail to the airframe but after a good friend who built the same kit added over 15,000 ‘Archer rivets’ to his build – well… I thought about using a riveting tool but again the time it was going to take put me off.
The build itself was straightforward with no real putty need just a little plasticard shim on one panel and some Mr Dissolved Putty in a few others.
The model was built in eleven days of about 12 hours over the Christmas and New Years holiday; it was a real fun build.
I finished the model with Tamiya and Gunze paints and I chopped the registration decal around to turn her from 83+12 in to 83+21 just to make her a bit different from the kit option.
Mish E.
Westland Wasp HAS.1 by Ian Ruscoe
This is my Westland Wasp HAS1 1:48th scale.

I finished this project at the start of this year using the poor Fujimi kit (which is not easy to find) and practically rebuilt it. The client wanted it based on a flight deck setting of HMS Gurkha – a Type 81 or Tribal Class frigate he served on.

The flight deck housing is made from pieces of basswood covered in plastic card.

Westland Wessex HAS.1 by Andrea Baldi
GALLERY 1
GALLERY 2
Lockdown speed build finished!! Thanx again Roy, hope you and everyone likes it and has fun and inspiration watching the pics!

I have used the Eduard interior and exterior detail sets together with their transparency mask; paints are general Humbrol enamels, with Humbrol clear, gloss cote varnishes used as required. Decals are from L Decals Studio mixed with the kit decals based on best scale representation (using photos for reference).

I have added a small amount of additional detail in the form of hydraulic pipes on the winch and various pipework on the fuselage. Weathering is very minimal (using Flory Washes) as these aircraft always look to be very clean in any photos. The exhausts were covered in bare metal foil and touched in with Humbrol Clear with a small touch of blue ink added to try and represent heat discolouration (not sure it worked!)

This started out as the 1:48th scale Academy kit of the venerable Wessex. I updated the kit using eduard etch, Scale Warship rotor fold set and some scratch building of my own for the cabin/cockpit.

Westland Wessex by Neil Pepper
This is the Italeri 1:48 Wessex which I built straight from the box and I can say it’s a nice kit and I am feeling the need to get another one or two!
Cheers, Neil P.

The conversion was relatively simple, the main change being the resin replacements of the fuselage belly panel and cabin windows. The fuselage panel required the removal of both plastic and resin to get it to sit flush. Any resultant gaps were filled with Milliput superfine putty. The kit cabin windows were measured and chain drilled following the Rotor Craft instructions. Cyanoacrylate glue was used to fit the windows in place and to fill any gaps. The remaining resin parts consisted of various aerials and chaff/flare pods.

Other details added were a scratch built fire extinguisher and rotor brake lever in the cockpit. Seat straps were made from masking tape and various cables and wiring were fitted using lead wire in the passenger cabin. The main undercarriage legs were replaced with the Scale Aircraft Conversions items. Other scratch built items was the anti-collision light on top of the tail rotor housing and finally, a little-lens was fitted to the underside to represent the landing light. The paints used are the Dark Green and Lichen Green from the Xtracolor range. The underside was Tamiya Flat black highlighted with Tamiya NATO Black. The decals were from an Xtradecal sheet and represent an aircraft from 72 Squadron RAF Odiham in 2002. Flory models dark wash was used for the panel lines and after an application of an acrylic matt flat finish, the colours were toned down using the oil dot method.
Mark Rooks

Westland Wyvern S4 by Nat Plaia
The model was built “straight from the box”, this Trumpeter 1:48 kit includes some nice photo etching that doesn’t obligate the modeller to look elsewhere to have a great result! Plastic moulding is excellent; rivets and panel lines are perfectly in scale and they simulate the real Bird well!

My paint choice this time fell on Tamiya, XF-21 Sky & XF-50 Field Blue + XF 1 Flat Black for the Extra Dark Sea Grey; diluted with 95% alcohol so as not to cover up the detail on this great kit. Alcohol makes Tamiya acrylic pigment extremely fine. I decided to not apply lighter post shading to the Sky, but only on the EDSG so as not to “disrupt” the basic tones. Panel lines and rivets received a highly diluted wash, using exclusively Vallejo washes (light grey on Sky and dark grey on EDSG). The process is simple but it requires a bit of practice; these washes need to be diluted with tap water to allow a pointed, sharp brush to pass on every panel line or, like here, on rivets. The color excess can be removed with a clean cotton cloth just dampened with water. Dry stains can be wiped off just adding a drop of Vallejo airbrush thinner. This kind of panel enhancing system, leaves very subtle, translucent shade that gives a good 3D effect to the whole model. Weathering was completed with some oil streaks obtained with MIG enamels Python engine metal cover, torpedo warhead , exhausts and rockets received some spray of Alclad metalizers. Minor details were hand-painted with Vallejo acrylics.
Nat P.

Here’s another of my builds which I completed 2 days ago – the Trumpeter 1:32 Wildcat, Early Version.
This was an OOB model with some scratch build seat belts. The only issues I had with the construction were the poorly fitting bulkheads which required some shimming.
Wing stripes were masked and painted as the kit decals disintegrated. This was also my first attempt with spraying metallics which I feel turned out ok. A good kit all round from Trumpeter.
Regards, Vaughan

Yakovlev UT-2 by Alexander Pirovskikh
This is my 1:72 Amodel short run kit that dates back to 2011. 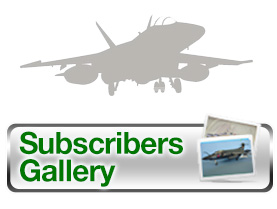