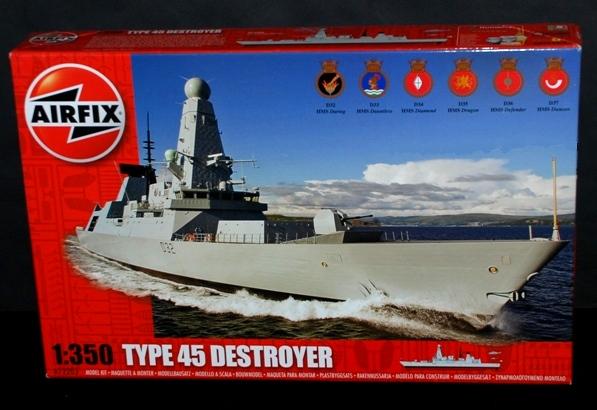 The Type 45 destroyer, also known as the Daring class, is a class of air defence destroyers built for the Royal Navy. The Daring class were built to replace the Type 42 destroyers. The first ship in this class, HMS Daring, was launched on 1 February 2006 and commissioned on 23 July 2009. In an “intensive attack” a single Type 45 could simultaneously track, engage and destroy more targets than five Type 42 destroyers operating together. The Daring class are the largest escorts ever built for the Royal. After Daring’s launch on 1 February 2006 former First Sea Lord, Admiral Sir Alan West stated that it would be the Royal Navy’s most capable destroyer ever, as well as the world’s best air-defence ship. The reduction in the number to be procured from twelve eventually down to six (in 2008) was controversial.

Having seen the completed model at Telford this year I had an idea of what to expect when opening the box…. And upon first inspection I wasn’t disappointed. The main construction consists of the deck, and two hull halves with a separate lower hull; thus enabling the modeller to produce either a waterline or full hull kit which will please every maritime modeller. One thing that struck me as slightly strange is the superstructure, which is already on the deck (as you can see in the photos), whilst not a problem will (I think) require some thought during the painting, but time will tell.

Over the five sprues included in this kit, there is evidence of very fine recessed detail mixed with good raised detail where applicable. The parts included in the kit have really nice detailing, and with the amount of resin aftermarket components available these days Airfix have stepped up to the plate and produced some exquisite injection moulded plastic which will leave the aftermarket companies fuming. Even the bridge has detail inside, consisting of consoles and even the captains chair!!

The aircraft that come with this kit consist of a Lynx and a Merlin; both have the option of either deployed or folded rotor blades. My only issue with the aircraft is the amount of flash on the rotor blades; plus the detail around the canopy seems a little soft. Maybe you will need those aftermarket companies after all?

One thing to note is the British Military loves to modify things; ‘why buy a new one when you can bodge the old one’. So care will have to be taken when modelling the Type 45, check your reference pictures and make sure for the year you are going for, no major external modifications had been carried out.

The instructions included in this kit remind me of the old black and white Airfix instructions, which is no bad thing, clear and calling out colour numbers where required. One thing to note is the options included (hangar doors, boarding ladders and weapons platforms) require some work at the start of construction, so read through the instructions before commencing gluing. One nice addition is the colour page showing the decal placement (for all ships in this class, and generic decals). All the colour references are called for using Humbrol paints (I’m shocked and Stunned…Not.) however you will be able to convert them into your own preferred brand easily enough.

The decals included in this kit don’t look too thick, and should settle with a decal solution, they cover the six ships in the Type 45 Class; plus generic decals for things like the danger zones for the weapon systems and flight deck markings, even decals for helicopters. An all round decal sheet, that covers everything a maritime modeller will require for this build.

A great addition to Airfix’s range of maritime models and will build into a nice Type 45 of your choosing, as I mentioned earlier, check your reference pictures. A great subject and notably cheaper than other Type 45’s out there. Will build into a good model out of the box; but will build into a great model with the addition of Photo Etch railings etc (Which White Ensign Models have released).