I am a huge fan of Revell and have built and enjoyed a number of their kits. Right now they are fast growing a deserved reputation for great quality fantastic value kits of subjects often at the top of modeller’s wish lists. Just look at the recent 1:32nd scale HE-111, JU-88, HE-219 and BAE Hawk as great examples of exceptional value and great kits to boot! It takes me back to my early modelling years of a 1:32nd scale F-4J Phantom for under £2 in 1970. To this end Revell are doing a great job of not only appealing to die-hard modellers but also really providing products that say buy me and maybe enthuse more into our great hobby.

Revell are also gaining a reputation for re-boxing other manufacturer’s products, often with new decals or some other twist. Monogram kits are commonly seen under Revel labels now and thank goodness for that, Special Hobby has just popped up too with their 1:32nd Scale Airacobra boxed by Revell. Even Hasegawa kits crop up too and often at far better prices than offered by the original manufacturer. There are exceptions and this kit of the USS New York is one of them.

It was originally released in the US under the MRC label and latterly I think Bronco Models too. The same applied to two other releases from Revell too: USS Wasp and USS Iwo Jima. USS New York is the third of this series and is of a vessel not to dissimilar in role to the other two ships.

She is the third ship with this name, the last being a battle Ship from WW2. This USS New York has 6.8 tonnes of Steel in its bow construction that came from the remains of the World Trade Centre and as such holds a special place in the US Military arsenal. 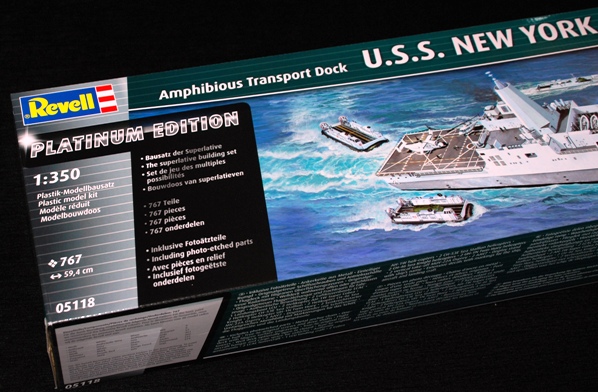 MRC/Bronco designed and developed this kit (like the two before) in collaboration with Trumpeter; it shows and in all the right and some of the wrong ways. The Box top is typical Revell in its Branding but the ‘painting’ of the USS New York’ and its support craft on the lid are very Trumpeter. For me the USS New York is an ugly ship, completely lacking in character and looking like the offspring from a Russian Oligarchs super yacht and a cross channel ferry. Some people think she is beautiful to me it’s soulless and like the Stealth aircraft of late leaves me utterly cold……hey the stealth works then! The plastic is typical Trumpeter, its crisp light grey easy to work with and exceptionally well detailed. It has 767 pieces all neatly packed on their many sprues in poly bags. The hull has protective foam around the bow. The model itself is quite long at 594mm and broad too so it’s a lot of ship. The ship is slab sided and has no conventional masts As such so the multiple pieces go to make up a lot of largely hidden detail (again very Trumpeter) inside the docking bays and of course the aircraft and support amphibious vehicles.

Also on the box are what look to be nice looking decals including those for the support craft and all the aircraft. It also includes the huge US Flag that was flown from it when the USS New York visited its name sake in 2010. Brass etch is included and will help to create a sense of realism to a model that will, because of its design, without care look toy like on completion.

Instructions are typically Revell. Clear easy to follow but with painting call outs that refer only to various mixes of Revell paints; this is not helpful in the least. There are 125 stages in the instruction booklet but this is only because Revell choose to break construction down into simple structures. As such I believe that this would make an exciting and easy to build first ship model to those coming to the hobby; whatever their age. Even the etched parts are not complex as deck rails are largely absent on this ship which has ferry like solid ‘rails’ built into the ships structure.

The kit is beautifully moulded and to scale both in length and beam. Parts are very finely moulded and will I believe response well to careful painting weathering and highlighting. Small components too are well moulded but so many are inside the ship or part of its supporting flotilla of sea and air crafts.

Fit is precise and the hull to deck join was superb on dry fit and if like other Trumpeter ships I have built this will follow for every component. It’s superbly engineered. I really love the detail of the landing craft’s the hover crafts and the aircraft that include Ospreys, Sea Stallions, UH1s, AGH1’s and Sea Knight’s. Some have folded rotor options but in truth these are over scale and ideally need replacing by brass; they are not on the etch provided though.

A stand is provided which is a rudimentary dry dock plate which could be painted and used. There is no water line option with the kit so I will be using my normal brass and oak arrangement that you will have seen me use before.

The etch brass set is small but helpful including as it does all the deck rails and vertical ladders plus some other bits and bobs like water tight doors and such like. It is not comprehensive and purists will want to wait for WEM or Eduard to bring out their sets in due course.

There is only one scheme and this is shown on a full colour glossy diagram that is used by Trumpeter. The decals are comprehensive but will from experience need a good gloss finish and decal softener to avoid any silvering.

This is a big ship in a big box with a lot of parts. It is simple to build and simple to paint but without care will look toy like. It is superbly engineered and fits together well and is accurate. The brass is a bonus and is welcome. I can’t help feel though that at £150 it’s not the best value. £75 seems right to me and I suspect if it was a pure Revell product that where it would be pitched. If you want the USS New York in your collection this is the one and as such is recommended.