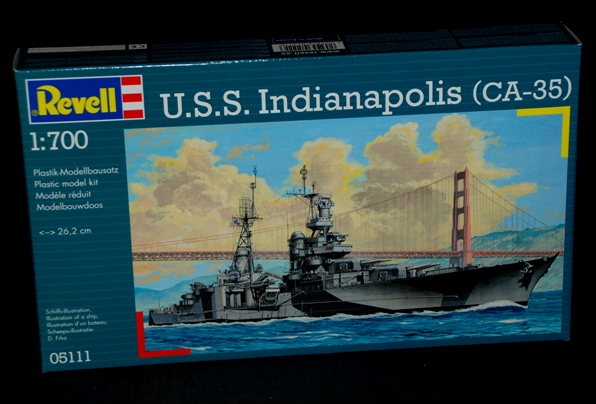 The Cruiser USS Indianapolis (CA-35) was ordered in 1929 as a light cruiser, in accordance with strictures of the “Washington Conference Treaty of 1922”.

By building 14 more cruisers and one aircraft carrier, the US Navy was to equal the size of the Royal Navy fleet. Inevitably, due to the world economic situation at the time, building was delayed by several years.

The keel was finally laid in March 1930 by the New York Shipbuilding Corporation and she was launched in November 1931.

The US Navy put the ship into service a year later, but now as a heavy cruiser in accordance with the “London Naval Agreement of 1930”. During WW2, the USS Indianapolis operated as the flagship of the US 5th Fleet in the Pacific.

There were always 5 reconnaissance planes carried on board, initially OS2U biplanes, then from 1944 Curtiss SC-1 Seahawks. The firing rate of the heavy artillery was two salvos per minute, with optical and radar fire control enabling the cruiser to attack targets up to a distance of 10km.

The Indianapolis received 10 Battle Stars for her missions and during the battles for Okinawa the ship was hit by a kamikaze plane.

After repair in San Francisco, in mid-July 1945 under strict secrecy, the USS Indianapolis brought the components of the atomic bomb that would be dropped on Hiroshima to the air force base on Tinian.

During the subsequent voyage from Guam to Leyte Island, on 30th July 1945 the starboard side was hit by two torpedoes from a Japanese submarine I-58. Ten minutes later the cruiser sank.

The naval command only received news of the sinking from a Lockheed Ventura that saw survivors in the water on the morning of 2nd August. 316 members of the crew, who had been in the sea for 3 days, survived.

The Revell package is pretty good, considering the scale. The vessel is waterline and clearly designed to be displayed in or on a suitable seascape, depending on your want.

The detail moulded onto the deck and superstructure is fair, especially for this very small scale and should paint and weather up to a decent finish.

The main guns are a dominant feature of the ship and will need some cleaning up to look their best; mould seams and the like, but nothing out of the ordinary and what you’d expect. The deck cranes are moulded solid and aren’t very convincing.

I remember that years ago I had planned to build a ship model in this scale and, after some initial prep, I soon realised that I couldn’t simply go with what was offered in the box.

That meant I scurried off to the model shop to buy some Gold Medal Models etched brass railings and what a difference they made. These days, White Ensign Models seem to stock pretty much everything you could ever want as far as maritime modelling goes and I would seriously recommend a visit to their online store to check out what’s available for USS Indianapolis.

This comprises a fold-out sheet with exploded diagrams showing where all the large number of parts go – clear enough.

The model isn’t unduly complicated as far as the build goes from this initial assessment and hopefully will present few, if any, problems to modellers with just a little experience.

Revell include a small decal sheet that looks good to use, as well as a paper signals sheet.

Colour is solid and strong with no items out of register; just remember to apply them onto a high gloss finish and then matt down as appropriate to reduce any chance of decal silvering.

In addition, coloured signal flags are provided on a small paper sheet.

Perfectly reasonable really for the money and size of model.

Plenty of people buy and make models in this scale and this would provide another major ship to add to your collection; one that is a sight easier to store and display than Les Venus’ Trumpeter 1:200 scale USS Arizona!