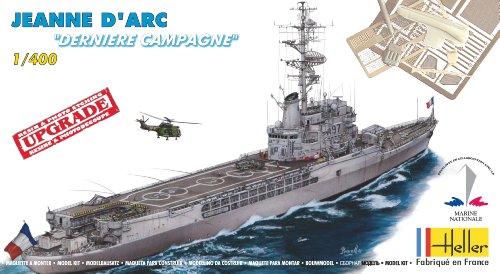 I have, as those that read my stuff in the otherwise awesome Scale Modelling Now will know, knocked out a few aircraft of late, struggling as I have to find a ship to really inspire me after completing my 1:200th USS Arizona last year.  I bought the Academy HMS Warspite but can’t get close to the incredible work being done by Julian on this. I have a Revell 1/350th USS Iwo Jima in the stash but there’s a super USS Wasp (sister ship) in the mag already so little point boring you with my efforts.  I really want to build the Hasegawa Akagi but my budget won’t stretch to the £300+ it would cost and I am still waiting for the new Trumpeter 1:200th scale Bismarck that I just have to build (Please note Geoff). I scanned through my fav model shop website and quite fancy the Trumpeter 1:350th USS North Carolina (I still do) which I have never seen built, but with the brass and new barrels I was looking at over £150 for that too! So what to do?

Just by chance I fell across the Heller 1:400th range of ships (It’s the metric 1:350th scale I believe) and there amongst an interesting range of ships was the Jeanne d’Arc (Joan of Arc). I was immediately taken by her lines and that long helicopter deck which takes 4, yes 4, Super Frelon helicopters as well an SA 330 Super Puma and a pair of Gazelles.  Moreover, it reminds me of the WW2 IJNS Mogami which I love and have in my stash too but it’s still awaiting brass.  All in all I loved the ship and had a quick peek at Model Shipwrights and the reviews were all good saying it was an accurate (late model) version of the ship and easy to build.

What’s even more compelling was that this latest iteration of the Heller boxing included etched brass and resin and all at only about sixty quid…..I was sold!

I haven’t seen a built version of this model, which is amazing given it’s such a great looking ship. I did a little digging around the interweb and I have included in this review a couple of videos and a brief history of the ship. Ostensibly, Jeanne d’Arc is a Helicopter Cruiser. In this is it’s a close relative of the USS Wasp but considerably smaller and much sleeker and prettier than the Wasp. Originally she had 4 x 100 mm gun turrets but in later life was equipped with Exocet launchers fore and aft. It’s this later version that is kitted here. Jeanne d’Arc was retired in 2010 and, much to the annoyance of the French public who seemed to j’dore the ‘Jeanne’, was broken up for scrap in the UK. The video I have attached shows her final cruise around the world as a training ship for French Navy Officer Cadets and is a great source of reference of this fabulous ship.

The box is of the robust lid and tray type with some reasonable artwork that does show off the lines of the ‘Jeanne’ very well. I was particularly pleased to see the word upgrade clearly shown on the lid and a very helpful photograph showing the etched brass. This declaration of the extras was the buying moment for me, as right off the bat I sensed a strong value proposition and a ‘build from the box’ approach that in these tough financial times is outstanding. Well done Heller, just on this alone I strongly recommend this model.

What is also albeit possibly unintentional is the really excellent portrayal of the mast and its rigging and aerial cluster. This will all come in very handy when I get to this stage of the build. So far then this model is really giving me a good feeling and huge thumbs up.

The parts count is quite low and most of what is needed is on 6 sprues, some of which are only very small. The hull which offers no waterline version is split vertically with the deck in three separate parts: bow, amidships and hangar deck. The plastic is a blue grey colour not a million miles from the actual colour of the real ship. It is soft and typically Heller but does make for some surface marking that will need cleaning off (I will probably use wire wool) before painting. It also feels a little ‘greasy’ which means release agent and thus will need a good wash before commencing any building. The softness of the plastic can mean warping and you can see from the photographs that the hull is slightly warped but it is nothing that clamping won’t cure though.

Despite the softness of the plastic, the detail on some of the small parts whilst a bit over scale in places is still very good and up there with more modern efforts from Trumpeter. Indeed some of it needs no further concern as the etched brass I will talk about later covers off the worse of it; the radar and mast array being two good cases in point. One unique point I have never seen before is the stern flag is moulded in plastic complete with mast and lanyard. It’s complete with simulated folds from a stiff breeze. Yes it’s over scale but I quite liked the thought that’s gone into it.

There are 4 Super Frelon helicopters in plastic with two of them complete with folded rotors. I have always liked this big helicopter, remembering affectionately the huge Heller 1:35th scale version of same back in the 70’s. I hope to do some detail work on these but let’s see what takes me when it comes to the build. Whatever I do they will really catch the eye sitting on the big deck and create I hope a stunning model.

The etched brass set is fabulous and has the look of White Ensign about it. At first glance all deck rails, masts and stairs seem to be there but if anything is missing I am sure I can get away in places with spares from 1:350th scale sets. Even the props for the ship are included which too is a really nice touch.

I love the resin in this kit. It’s in a light buff soapy resin that is easily worked yet holds detail really well. Some of that detail is exquisite and will bring the model to life. I am especially excited about the truly outstanding SA 330 Super Puma and the brace of little Gazelles. Rotors for these are on the etch set with one set for one Gazelle in the folded position. Again these are little models in their own right and will need careful assembly and painting which if done well will make the model a show-stopper.  I love the pair of assault dinghies too which will look great on the deck. Finally it’s worth mentioning that Heller also include a length of brass chain for the anchor cable.

The instructions are well printed and clear. I think that there are likely to be areas of this build that will require some careful thought, especially about painting and weathering as well as placement of the etched brass. In particular the area beneath the deck is exposed to semi-enclose the walk from stern to amidships.  I suspect there will be some deck rail here and of course the deck and the hull will need painting and weathering before assembly of the model.

Main painting and decaling instructions seem adequate but only refer to Humbrol colours. No big deal this.

All in all the instructions look as good as most ship kits I have built and seem to offer at first glance no obvious howlers.

Only one scheme is shown as there is only one ship offered in its last version. These are colourful and appear complete. I suspect a good coat of Alclad Aqua Gloss will be  needed on the flight deck to avoid silvering on numerous deck markings but done well, should really catch the eye. The black boot topping is included on the sheet as are markings for the helicopters and a sheet of paper pennants complete the package.

This is an older kit that is obviously one that Heller holds with great affection. This upgraded re-release is outstanding with its etched brass and resin. It’s well moulded, accurate and should by the look of it assemble very well. Care will need to be taken with the soft plastic and painting and weathering will be key to success. The helicopters both in plastic and resin are simply incredible and I am itching to get on.

The price is simply amazing too. Buying a kit of this type with resin and brass separately would easily see the £85 mark broken and you get it all for less than £60. Staggering value for money and thank you Heller foe what is obviously a labour of love.

I haven’t been this excited about a ship model since the Arizona and I can’t wait to get cracking on this one. I will see if I hold this view after the build but for now if you like a value project that’s not too trying and can be built from the box then look no further than this and buy it why it lasts.