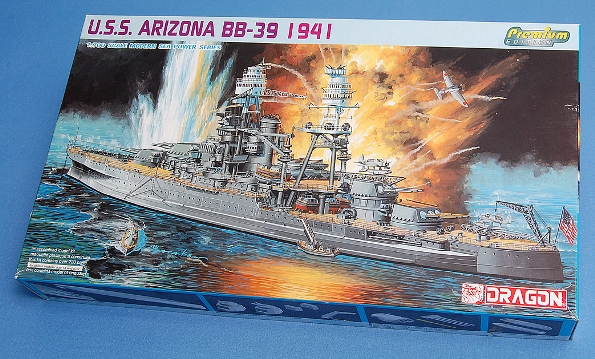 The kit comes in a sturdy lid and tray box with superb artwork of the Arizona on that ill-fated December 7th 1941, with a Japanese fighter bomber buzzing around her iconic superstructure. The sides of the box show views of the 3D CAD rendered images of parts of the model, a side view in colour, the photo etch and the brass barrels for the main guns.

The sprues and hull parts are very nicely packaged and sealed in polythene bags, with the metal parts individually bagged and mounted on a card. The 13″ x 7″ x 1.75″ box is longer than the, roughly, 10.5″ hull, but not much longer than the largest sprue so is not oversized.

The original 1:700 Dragon kit of the Arizona was well received, but did come under some criticism for having some of the parts, including I believe, the bridge, fighting tops and rear crane in a hard rubber material rather than plastic.

I have no idea why this would be but this Premium Edition Kit addresses that issue and all the main kit components are in a good quality grey plastic that we all know and love.

A really welcome addition to this kit is brass. There are 12 turned brass barrels for the main armament, with hollow ends so no need to drill them out (the plastic ones are also hollow ended, benefitting from Dragon‘s ‘Slide Moulding’ technology).

Two brass photo etch frets, one complete with railings and a few other details, the other with a replacement rear crane which is a prominent feature of the ship and will be greatly enhanced by the brass offering.

There also appears to be the main yard arms but, strangely, there’s no mention of them in the instructions and a few other small details including a couple of propellers for the OS2U Kingfisher Amphibian Aircraft which, by the way, are nicely done with recessed panel lines. 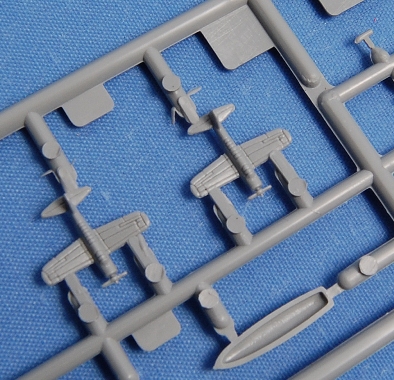 Sadly, a couple of items that really would have benefitted from brass PE are the catapults for the aircraft, one on the rear of the ship and one on her number 3 turret. All photo etch parts are optional however and you may stick with plastic parts if you feel more comfortable with them; the railings are a must though. 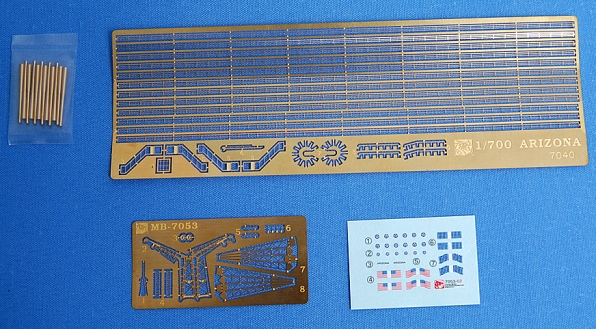 Also included is a length of chain, which looks fairly fine but I will reserve judgement on its scale until I fit it. Chain at 1:700 is very hard to find in the correct scale and is often way oversized on kits.

The Dragon kit of the Arizona, especially the Premium Edition version, is well regarded on modelling forums for overall accuracy.

The Arizona is a very old design as a WWI super Dreadnought, her keel was laid at the Brooklyn Navy Yard on 16 March 1914. She was launched on 19 June 1915 and has an almost squat, bulbous Jules Verne look about it.

The model depicts that look very well. So well in fact that, for me, this should be built full hull, not waterline, to get the best from her very distinctive shape.

Dragon always seem to get the quality of their plastic right; hard enough to take sharp detail but soft enough to work with.

The attachment points of the parts to the sprue could have been finer and care will be needed when separating a considerable number of small parts, given the scale, from their sprues.

Surface moulded detail is very sharp and well defined, I suspect that there will be some issues with scale, splinter guards and wall thicknesses, but it is inevitable at this scale that some parts are too thick.

Having said that, looking over the parts, nothing stands out as obviously over scale. The detail in the ship’s boats is very nicely done with the planking delicately depicted and will take a wash well to bring it out.

There are, moulded on the main deck, a couple of what have become known as ‘Aztec Stairs’, which on the real thing would be sloping stairways, almost ladders, with hand rails.

These are just about impossible to replicate in plastic and are often depicted as triangular shapes with steps on the hypotenuse similar to the steps leading up Aztec temples, hence the unfortunate nickname. These are best done with photo etch, but none are supplied with the kit.

The only real major sore points from what I can see and have read elsewhere is that the main deck is moulded into the main waterline hull section, other than inserts at the bow and stern. This inevitably leaves a join line visible that is not easy to correct due to the raised detail conveying the deck planking. They would have been better moulding the full deck in place and I can see no reason for not doing so.

A choice of hull styles are included, either full hull or, with a flat plate mounted in the upper hull, a waterline model.

At this early stage, I have to say that the full bottom hull to upper hull does not appear to be very precise so may require a bit of work to get a seam free fit. A moulded name plate is included but no stand.

Click on the Thumbnails below to enlarge the images and see what you think for yourself.

The instructions are a 6 page tri-fold sheet, with the build taking up 10 main sections, some of which contain sub sections.

There are some anomalies in the instructions. There is no mention of the (apparent) photo etch yard arms, nor are they listed on the sprue shots as not used.

Also, the flat waterline hull plate is not mentioned at all, but I suppose is fairly obvious. I am not sure if the instructions have been re-printed at some stage, but one review I read mentioned an unused crane in photo etch; my instructions, nor the photo etch fre,t have such a part.

That reviewer also bemoans the fact that only one catapult is provided in photo etch when in fact, none are. One very nice touch on the instructions however is the colouring in blue of the photo etch parts, making it a lot easier to spot where the fencing in particular is located on the upper superstructure.

The decals consist of the aircraft markings, two name plates for the ship and flags. They do look nice and sharp and in good register.

This kit is probably the best depiction of the Arizona in 1:700.

Being a Premium Edition, it comes with some really nice, if incomplete, brass photo etch. I am being very picky here though as the kit cost me £24 and has some important PE and brass turned barrels. I suspect that these alone would have cost more than I paid for the kit.

It is inevitable that there will be some comparison with the amazing 1:200 scale Arizona that Les Venus is building for SMN, but that would be unfair for two reasons. One, at this scale, at the side of Les’s model this will look like it is one of the ships boats fallen from his model!

Secondly, it is inevitable that some detail has to be sacrificed at this reduced scale, but I would hope one day to see them side-by-side, just to compare them for size. 1:200 to 1:700 does not seem that great a jump but, having seen the 1:200, this one looks tiny but amazing.

The Arizona is not a huge ship but has a huge presence in modern history. If you are limited in display space, this is the best 1:700 Arizona there probably ever will be.

My Thanks to: The staff at Wonderland Models, Edinburgh, for putting up with this strange Englishman wandering around their amazing store muttering “oh my God” repeatedly and for being so helpful in pointing me in the direction of what I was looking for.