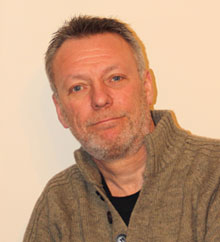 What first attracted you to Scale Modelling?
As a young boy, being confronted and exited by the wonderful box art of the Airfix models on display in the “Woolworths” stores in the sixties. My Grandmother would take me there on a Saturday morning, buy me a kit of my choice and by late evening I’d assembled it and had carried out many successful missions!

How long have you been scale modelling for?
I think I started at the age of 6 or 7 with a break of a few years after joining the RAF in 1978. So, that would be about 40 years!

What is your favourite real subject of all time (aircraft, armour or maritime)?
That has to be the English Electric Lightning. I was lucky enough to serve at RAF Binbrook for 2 years in the early eighties servicing the Lightning’s 30mm Aden cannons. Nothing can ever beat the sight and sound of Lightning taking off and climbing vertical to 50,000ft plus!

The best thing you’ve ever built?
That has to be Tamiya’s 1/32 scale P-51D Mustang with all the extra bells and whistles I added to it. Wonderful modelling experience.

And finally: Most memorable Modelling disaster?
My first attempt at a review subject for Geoff. I was given the beautiful Wingnut Wings 1/32 scale Fokker D VII. The engine and fuselage went together like a dream. Then came time to fit the top wing, Oh dear! However hard I tried, I could not get it to fit. I eventually handed it over to fellow reviewer and expert in 1st World War Aircraft builds, Dave Coward. After rushing it into the Emergency Operating Theatre for immediate surgery, it was pronounced dead on arrival. Very embarrassing.

How long have you been a reviewer for?
This is my 1st review (successful that is)!

What made you get involved with SMN?
Meeting and talking to Geoff and the boys from the Ewerby Model club at the Huddersfield Model show 2012. I’d been an admirer of Geoff’s work for many years In TMMI.

What’s your favourite thing(s) about SMN?
Just about everything really. I do love to see fellow modellers work in the Subscriber’s Gallery and I also find the photographic reference galleries extremely useful.

Favourite SMN review?
I have to say that I love everybody’s work who contributes to the magazine. However, Dave Cowards 1st WW aviation subjects are just sublime. How does he do it?

Sum yourself up in no more than five words.
Cracks spectacularly when under pressure!

Three famous people who you admire
Dr Stephen Hawking.
This man’s mind is unbelievable! To take apart, understand and then explain the physical laws of our Universe in layman’s terms is one hell of an achievement, all done despite his disability?
Neil Armstrong.
This man was everything I’m not! Brave, laid back and cool under pressure.
Ozzy Osbourne. Just a crazy nutter who’s produced some of my favourite music of all time!

A child asked his father, “How were people born?” So his father said, “Adam and Eve made babies, then their babies became adults and made babies, and so on.” The child then went to his mother, asked her the same question and she told him, “We were monkeys then we evolved to become like we are now.” The child ran back to his father and said, “You lied to me!” His father replied, “No, your mum was talking about her side of the family.”