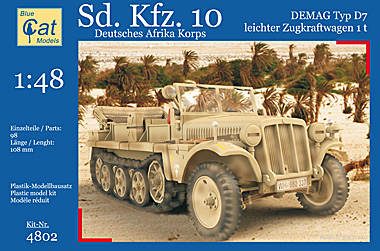 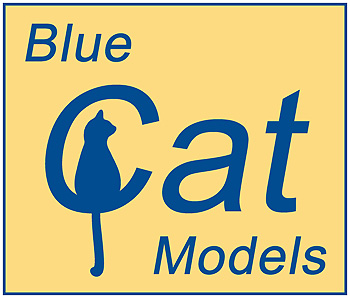 Our thanks to the guys at Blue Cat Models for supplying our review sample. Sorry it’s taken a while to get this into SMN but we will also bring you some build shots and some of Neil’s finished model. You can get this model here now at Blue Cat Models

The Sd.Kfz. 10 (Sonderkraftfahrzeug – special motorized vehicle) was a German half-track that saw very widespread use in World War II. Its main role was as a prime mover for small towed guns such as the 2 cm FlaK 30, the 7.5 cm leIG, or the 3.7 cm PaK 36 anti-tank gun. It could carry eight troops in addition to towing a gun or trailer.

The basic engineering for all the German half-tracks was developed during the Weimar-era by the Reichswehr’s Military Automotive Department, but final design and testing was farmed out to commercial firms with the understanding that production would be shared with multiple companies. Demag was chosen to develop the smallest of the German half-tracks and spent the years between 1934 and 1938 perfecting the design through a series of prototypes.

The chassis formed the basis for the Sd.Kfz. 250 light armored personnel carrier. Approximately 14,000 were produced between 1938 and 1945, making it one of the most widely produced German tactical vehicles of the war. It participated in the Invasion of Poland, the Battle of France, the Balkans Campaign and fought on both the Western Front and the Eastern Front, in North Africa and in Italy.

The Sd.Kfz. 10 was unique among German half-track designs as it used a hull rather than a frame. Power was provided by a Maybach 6-cylinder, water-cooled, 3.791 litres (231.3 cu in) NL 38 TRKM gasoline engine of 90 horsepower (91 PS). It had a semi-automatic Maybach Variorex-transmission SRG 102128H (Schaltreglergetriebe 102128H) with seven forward and three reverse gears. The driver selected the desired gear and initiated the shift by depressing the clutch. It could attain 75 km/h (47 mph), but the driver was cautioned not to exceed 65 km/h (40 mph). In 1942 the Luftwaffe limited its vehicles to a non-tactical speed of only 30 km/h (19 mph) to extend the life of the rubber track pads (Gummipolster).

Both tracks and wheels were used for steering. The steering system was set up so that shallow turns used only the wheels, but brakes would be applied to the tracks the farther the steering wheel was turned. The drive sprocket had the track-saving but more complicated rollers rather than the more common teeth. The rear suspension consisted of five double road wheels mounted on swing arms sprung by torsion bars. An idler wheel, mounted at the rear of the vehicle, was used to control track tension. The front wheels had transversely mounted leaf springs and shock absorbers, the only ones on the vehicle, to dampen impacts.

The upper body had a baggage compartment separating the driver’s compartment from the crew compartment. Bench seats on the sides of the vehicle, with under-seat storage, could accommodate six men. The windshield could fold forward and was also removable. A convertible canvas top was mounted at the upper part of the rear body. It fastened to the windshield when erected. Four side pieces could be mounted to protect the crew from the weather.

On to the kit… 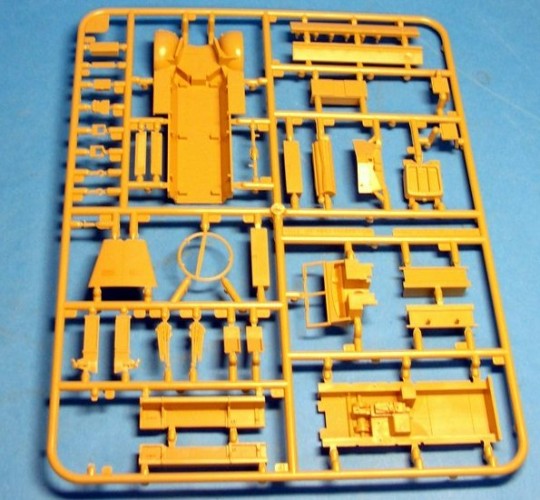 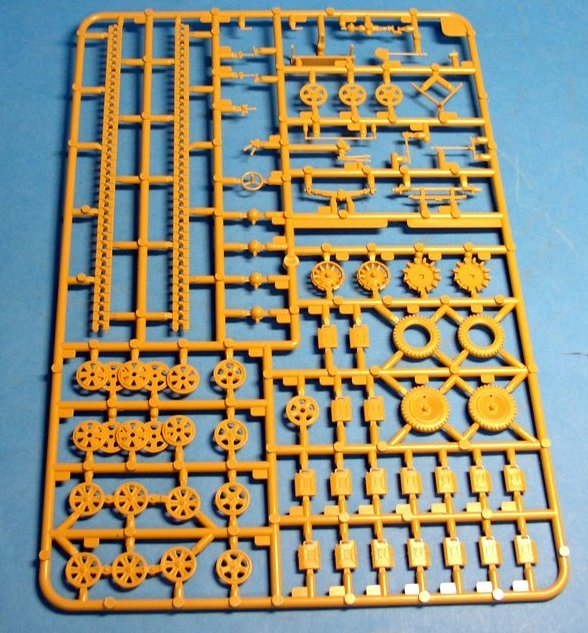 We got this kit as a sample with no box but in a bag like the old Airfix kits (it brought back some happy memories) looking into the bag I could see lots of very nice detail and all looks very crisp.