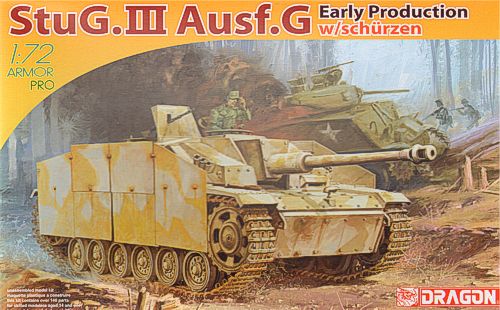 I am a big fan of the Sturmgeschutze III series of vehicles and especially the later long barrelled versions.  This pugnacious tank killer and infantry support AFV was fast and manoeuvrable and despite the lack of traversing turret had an impressive kill ratio, especially on the Eastern front.

Click on each image to increase and decrease the size of the pictures.

The box is nicely decorated however it’s exactly the same painting that adorns the 1:35 vehicle which is a bit lazy although I can understand the reasons behind this.  The plastic is typically Dragon being finely moulded with crisp details.  There is an odd mix of moulded in pioneer tools and separate details, if they can do the bolt cutters then why not everything else?

The main body is split into logical sub assemblies and although this increases the potential for alignment issues this is a dragon product remember so I suspect the fit will be good.  The shurzen is included and very fine it is too however to take mine to the next level I’ll be using the update set from Voyager.

The tracks are of the DS styrene band type and will be compatible with your normal styrene cement.  I had trouble with these with my 1:72 Sherman as the glue melted the tiny link attachments so to avoid this I’ll probably use superglue.

Also included is a tiny photo etch fret which has the grills so anyone who wants a simple straight from the box build will be pleases.  I’ll be throwing pretty much everything at mine though.

Lastly, there is the small decal sheet.  It maybe small but there are a myriad of choices and schemes to choose from and all major theatres are represented.

Overall this is yet another quality product from Dragon.  Although relatively expensive, there are bargains to be had.  We got ours from www.modelhobbies.co.uk in their specials section so it pays to shop around.

I’ll be doing this model alongside the 1:35 version which will be an interesting comparison so stay tuned for those articles which will be appearing soon.