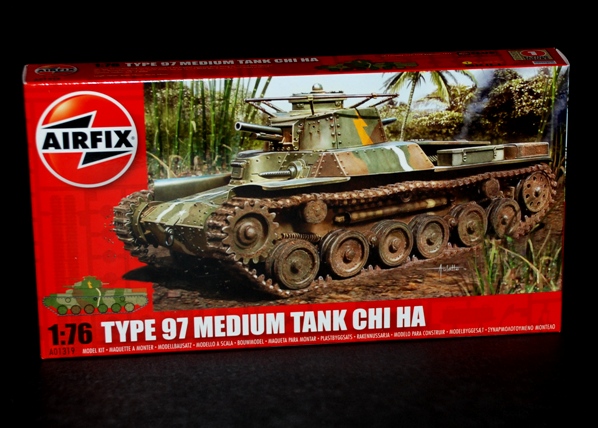 The Type 97 Medium, known as the Chi Ha, was the main battle tank of the Imperial Japanese Army during WWII.

Entering service in 1937, the CHI-HA saw widespread service in China and the Pacific, but inadequate armour protection and the low velocity of its 57mm gun made it no match when it came up against Allied tanks.

To increase the effectiveness of the basic design, an improved version was built with a long-barrelled 47mm gun in a new turret; the tank being designated Type 97 Medium-Modified.

The CHI-HA was of riveted construction with a secondary armament of two 7.7mm machine guns. A crew of four was carried and the 170 hp V-12 diesel engine produced a road speed of 23.5 mph. A radio antenna was normally located round the turret top.

When I saw this model, I thought ‘hmm, that looks new’ and on opening the box, sure enough the contents would suggest that this is so.

Where’s all the flash? Heavy join gates on the sprues? Indifferent detail? You’ll be pleasantly surprised with what’s in this small box – a small model Type 97 for sure, but very finely moulded detail and very impressive for the scale; definitely worthy of the great box art on the outside!

The images above should show you what I mean, but look at the fine rail around the turret top as an example, or the fine grills on the rear decking…or the road wheel hub detail – it goes on.

These are very soft and pliable with decent detail and look like they will be straightforward to mould and attach to your model.

They look pretty fine to my eye, albeit with some flash around each link, but the only reasonable way to go in manufacturing terms in this scale.

The flash may prove to be a pain to remove if that needs to happen in the build, but depending on the degree of weathering you are planning that may not be necessary. 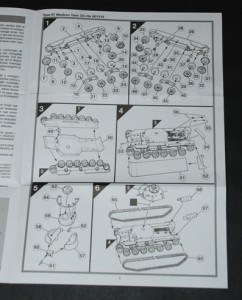 A painting guide is provided on the back of the box and, although Humbrol colour references are given, the colours are named and this will help you to match the colours from your own source to complete your model authentically. 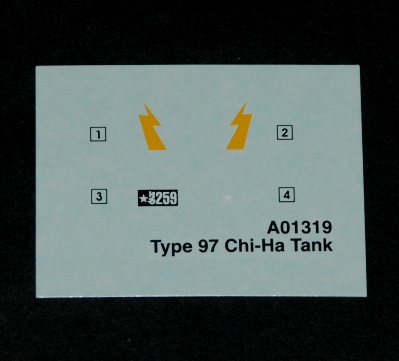 A tiny decal sheet is included with unit and vehicle markings.

Looking at the quality of this, you’re unlikely to have any problems putting it onto a glossy surface; matting down later of course and/or following your usual weathering processes.

I am really impressed with what looks like a great little model.

I have no idea if this is in fact a re-release, an updated tooling or one bought in from another manufacturer and re-branded under the Airfix logo – who knows, but I don’t much care.

The fact is that you are getting a great little model that’s well detailed with minimal flash for a model dating back to 1974.

1:76 scale is still popular, thanks to the likes of Airfix and their range of AFVs, so this armour kit release is very welcome for that reason alone.