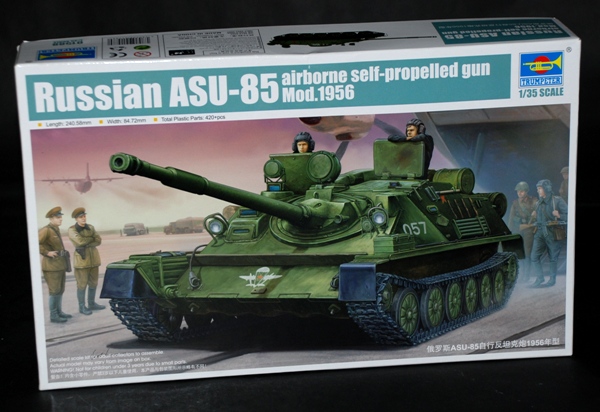 Development of a new assault gun for the armed forces started at the OKB-40 design bureau of the Mytishchi Machine Building Plant (MMZ), under the supervision of chief designer Nikolaj Aleksandrovich Astrov. The first Ob’yekt 573 prototype was ready for factory tests in the second half of 1953. This first vehicle was followed by a small batch of three improved vehicles that were evaluated by the armed forces in 1956-1957. The improved vehicles were powered by a new, horizontal six cylinder diesel engine, the YaMZ-206V, instead of the original V-6 of the PT-76. In 1958 the order to start series production of the SU-85 – as it was initially known (although there was already a vehicle with that same name, based on the T-34) – was given. However, as a result of an order from the Ministry of Defense to add an armoured roof (the initial vehicles were still open-topped), series production could only begin in 1961. By then, the configuration was already out of date and in the second half of the 1960s the VDV became the main operator of the SU-85 and renamed it into ASU-85.

The SU-85/ASU-85 is based on the PT-76 tank chassis, but without the amphibious capabilities and fitted with a new engine. The vehicle has three compartments: the driver’s in front, the combat compartment in the center and the engine compartment at the rear. The armament consists of a D-70 (2A15) 85mm gun, derived from F.F. Petrov’s D-48. The L/67 ordnance has a total weight of 1,865 kg and an elevation range from -4.50° to +15°. Traverse is 15° either side. The D-70 fires the same ammunition as the D-48 (3BK-7 HEAT, BR-372 HVAP-T and OF-372 HE), the combat load is 45 rounds. The gun has an effective range of 1,150 m and a maximum range of 10 km. The coaxial machine gun is either the SGMT or the PKT with a combat load of 2,000 rounds. Both the main gun and the coaxial machine gun are aimed by means of the TShK-2-79 sight. For nighttime fire, the TPN1-79-11 sight is used, in combination with the IR searchlight L-2. Indirect fire is conducted with the help of the S-71-79 and PG-1 sights. Furthermore, the commander is provided with observation devices TNPK-20 (day) and TKN-1T (night). All ASU-85s were provided with an R-113 radio and the R-120 intercom system. In the early 1970s, some vehicles were fitted with a DShK-M 12.7mm heavy machine gun with 600 rounds. These vehicles had a reduced combat load of 39 main gun rounds and received the NATO designator ASU-85 M1974. The original designation was SU-85M or ASU-85M. The ASU-85 could also be equipped with smoke generators BDSh-5.

The Soviet Airborne Forces used the ASU-85 in airborne operations. Its primary role was light infantry support or assault, with limited anti-tank capability. Each Airborne Division had one assault gun battalion with 31 ASU-85. The Polish 6th Pomeranian Airborne Division (Polish: 6 Pomorska Dywizja Powietrzno-Desantowa) had an equal number. The ASU-85 became possible with the introduction of the Mi-6 and Mi-10 helicopters and high-capacity multi-chute and retro-rocket systems for fixed wing-drops. It was first observed by NATO in 1962, and was widely used by Soviet and Polish airborne units.

When opening the box you are met with nineteen sprues full of crisply detailed parts, plus the upper and lower hull, a sheet of photo-etched, a length of brass wire and a decal sheet that covers two vehicles – impressive initial impression! When I crack on with the build we’ll see how it all goes together, but at this early stage: very positive range of additions, especially the etched brass, and rope.

This kit has individual track links which, if you haven’t used them before, can look like a big project in themselves and we will find out how good these are when the build is undertaken. Usually, although fiddly, they can work very well.

The instructions look very clear and easy to follow, as with most Trumpeter kits.

Now we’ll see how this one builds up! Neil P.