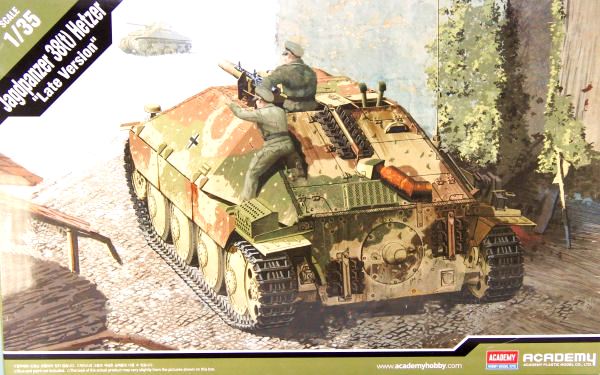 Something to get you in the mood! …

Brief background to the type…

The Jagdpanzer 38(t) (Sd.Kfz. 138/2), later known as Hetzer (“baiter”), was a German light tank destroyer of the Second World War based on a modified Czechoslovakian Panzer 38(t) chassis. The project was inspired by the Romanian “Mareşal” tank destroyer. The name Hetzer was at the time not commonly used for this vehicle. It was the designation for a related prototype, the E-10. The Škoda factory for a very short period confused the two names in its documentation and the very first unit equipped with the vehicle thus for a few weeks applied the incorrect name until matters were cleared. However, there exists a memorandum from Heinz Guderian to Hitler claiming that an unofficial name, Hetzer, had spontaneously been coined by the troops. Post-war historians basing themselves on this statement made the name popular in their works, the vehicle was never named as such in official documents.

This looks to be a typical Academy kit which means it will be easy to build with well fitting parts. The kit box is of the ‘tray and lid’ type, is reasonably sturdy and contains 344 styrene parts, one etch part, a piece of string, a small decal sheet, a pre-cut masking sheet and the instruction sheet of 10 pages. Also included is a small guideline for beginners showing some tools and their uses as well as how to apply the decals.

Their does seem to be some issues dimensionally with this kit but they are about 1mm across the board, checked against the Panzer Tracts book, but I don’t think this will detract from the model once finished. This may not be true if you are looking for accuracy as a major item for your kit build. Click on the pictures below to view larger images:

For the most parts the moulding is acceptable but some of the smaller items are a little on the thick side and a little ill defined like the rear light in the mudguard support bracket. The tracks are very good dimensionally but have some knock out marks on the inner surfaces which may not be visible once built. The wheels look very good with detail front and back, the drive sprockets are a two piece assembly. While the idlers are again a two piece assembles with three sets supplied with 4, 6 and 8 lightening holes.

The hull/superstructure is well detailed but is about 1mm short and the same in width and there is no internal detail which means if the hatches are to be opened needs rectifying or crew figures added to block the view of the interior.

On the sides of the superstructure are 6 small rectangular blocks meant to represent the tie downs and these should be removed and replaced with small wire items fitted into holes drilled into the side armour. The jack block mounted on the right hand side fender is very basic. The string is attached to two plastic eyes to represent the tow cable which is meant to fit around the engine access panel on the rear plate but no brackets are supplied for this. This can be overcome by scratch building some with either pictorial evidence or scale plans coming to the rescue. The rear left side has the grouser box with partly indented holes which will need drilling out. This will show the thickness of the moulding and some may consider replacing with a scratch built or a photo etch item. Another omission is for the wire cutters which have no means of support once placed on the vehicle again it can be remedied quite easily.

Three barrels are included in the kit two of which appear to be the same whilst the third has screw threads on the end section which should not be used as far as I have seen this type of barrel was not used. (OK now is the time to prove me wrong). There is a seam mark down the barrel which will make clean up difficult where these threads are so perhaps it’s a good job its not needed.

Two figures are provided with crisp detail which should build up into a couple of nice additions to the vehicle.

As previously stated these are ten pages which contain 13 steps for the construction with the last being for the figures. These follow a standard layout and are clear and logical. Page 8 shows the layout for the masks and for the actual sheet both having numbers for identification but no numbering is present on the masking sheet. The modeller will have to take care when finding these and as no suggestion is given to the order of painting or of mask placement, a plan will need to be formulated with care being needed to complete this stage.

The decal sheet is only small as it has six Balkan crosses of which only three are required. They look to be thin and well printed and in register. 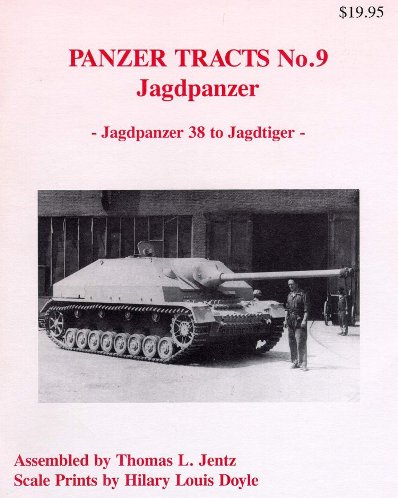 I think this is a mixed bag with issues with dimensions, missing items such as the spade, no slide for the internal heater and some poor detail. Having said that the moulding is very acceptable on most parts and it should be a straightforward build. The masking is a great idea and I hope this can be carried forward to future models but with numbers printed on the actual masks for ease of identification and it will be interesting to see how this works in practice. I would have liked to see an interior but this can be added by the modeller and of course this would have pushed the price up. It may seem like I’ve come out with a lot of items which are not perfect but for a one sentence summary would be a nice kit with a compromise between price and detail.