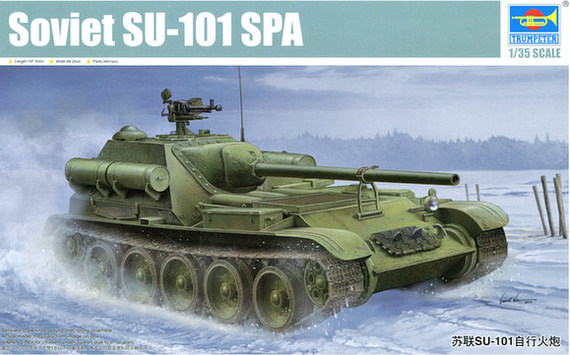 The Su101 was a self-propelled gun developed towards the end of the Second World War as a replacement for the Su100 then currently in service. The Su100, though successful, was not without its shortcomings. The fighting compartment and gun were at the front of the vehicle which overloaded the front of the chassis. The forward position of the fighting compartment coupled with the length of the gun barrel made for a long vehicle that was difficult to manoeuvre in built-up or wooded areas.

The Su101 and the similar Su102 were based on the newer T44 chassis rather than the T34 on which the Su100 had been based. The fighting compartment was at the rear of the vehicle with the long gun barrel overhanging the engine compartment. While this reduced the length of the vehicle there were still problems, notably with overheating of the interior and the cramped nature of the fighting compartment, making it very uncomfortable for the crew. The end of the war with Germany and mechanical problems with the Su102 led to the cancellation of both the Su101 and Su102 projects and they were not developed beyond the prototype stage.

The main parts of the kit are in Trumpeter’s usual light grey plastic with 196 parts spread over seven sprues. The mouldings are of very good quality with no flash as you might expect. There are a couple of sunken mould release marks on the underside of the track guards which may be visible on the finished model, but these could easily be filled and sanded away.

The kit provides link and length tracks in brown plastic with 19 parts per side. Thankfully there are no ejector pin marks on the inside faces of the tracks. One of the lengths of track has been moulded with a slight curvature, presumably to represent track sag above the road wheels. 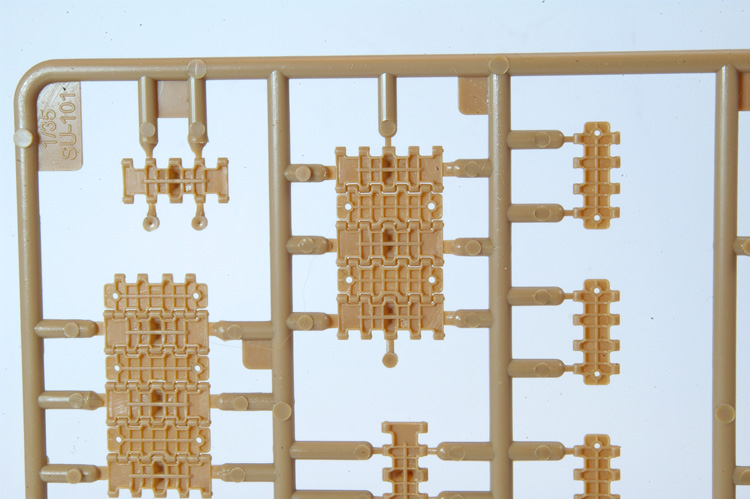 There is a clear sprue holding the headlight lens and a small etched brass sheet with the grille for the air intake on the engine deck and the flat section handles for the fuel tanks on the sides of the hull. 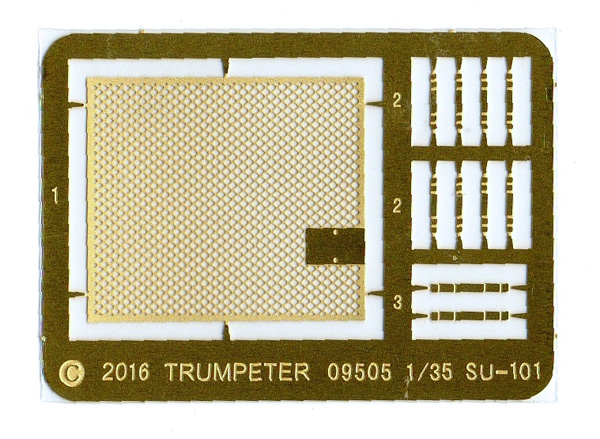 There are national markings provided on a small transfer sheet. As far as I can tell from period photos the prototype carried no markings of any kind so these will be consigned to my spare transfer collection to be used on another project in the future.

There is not really much choice as regards the colour scheme, with overall Russian Green being the only option. 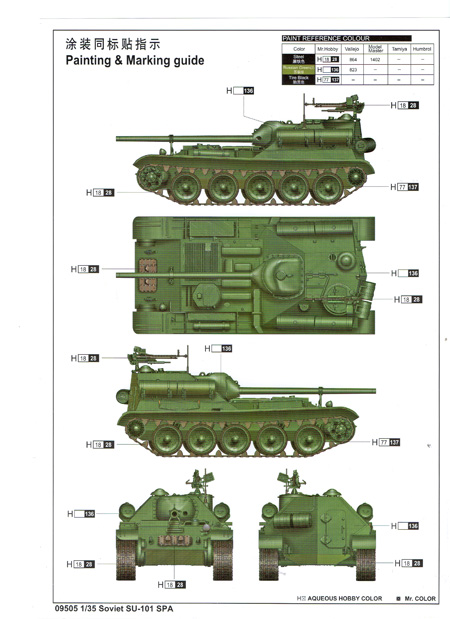 While the exterior detail looks very good indeed, there is no interior detail provided. There is also no detail on the insides of the hatches and rear access door. These will need to have handles and hinge details added by the modeller if they are to be modelled open to accommodate figures etc.

The barrel of the main gun is in two halves with a hollow end cap. This assembly will need careful cleanup to remove the join line. The wheels and tyres are moulded separately. This has presumably been done in order to maintain a sharp demarcation between the wheel rims and the tyres. 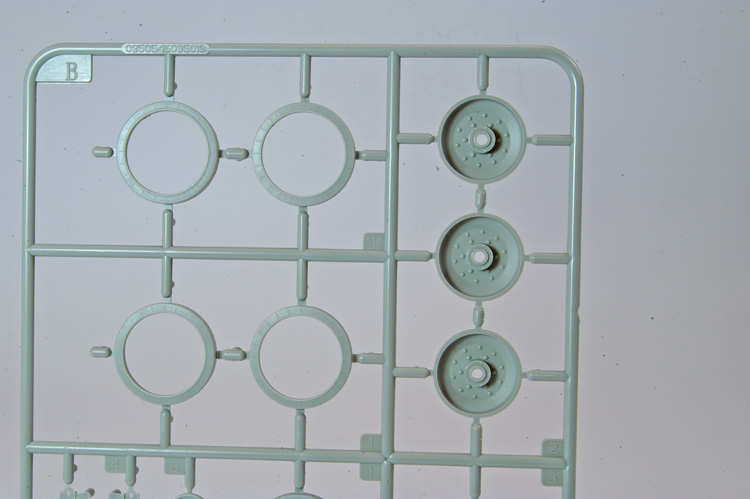 The fuel cans on the hull sides are moulded as cylinders with an end cap rather than in two halves. This means that the modeller will have to deal only with a slight mould release line rather than two heavy joint lines. Note, however, that these tanks sometimes had a heavy weld line along their length so it may be worth checking photos should you wish to replicate this feature.

There are no tow cables supplied in the kit. Period photos show that two were carried. These ran from the towing points on the front of the hull to hooks attached to the tie down points on the sides of the fighting compartment under the fuel tanks. These will need to be obtained from the spares box or form after-market suppliers if required.

The Su101 prototype survives and is currently on display at the Kubinka Tank Museum in Moscow. At the time of writing there is a very comprehensive set of excellent ‘Walkaround’ photos available on the internet courtesy Vladimir Yakubov which may be found at:-
http://svsm.org/gallery/Su-101

Examination of these photos showed that there were a few things that could be added to the kit should you wish to do so.

The first thing that becomes obvious is the rough nature of the armour plate used. Whilst there is some cast texture moulded into the gun mantlet, this could probably be made to look even heavier and the rough texture should be extended over much of the rest of the model. Stippling Mr. Surfacer or a similar product onto the plastic with an old paint brush would be an easy way to replicate this. 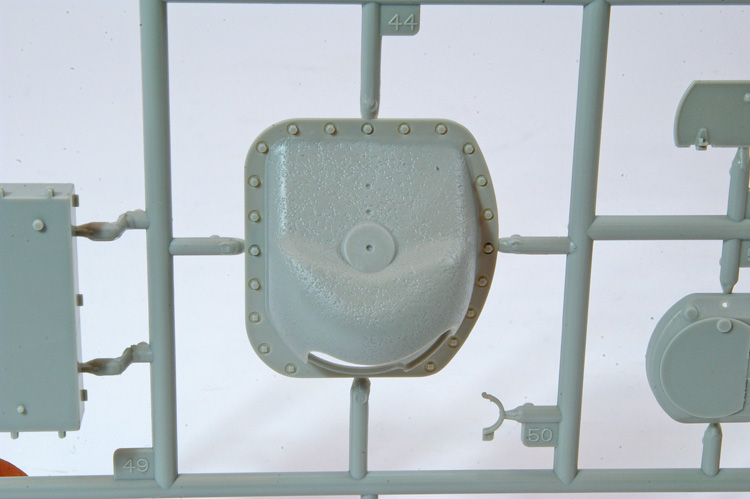 The next thing that becomes obvious is that there were a number of very rough looking weld marks on the vehicle. These are either not replicated on the model at all (such as those around the extension on the left hand side of the fighting compartment for the commander’s hatch), or could be made to look a lot more prominent. 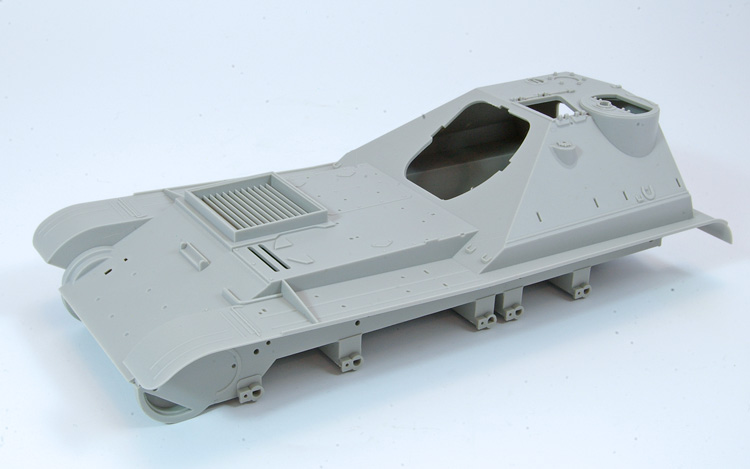 Some smaller details are present in the walkaround photos which could also be added. There was a small step under the rear access door that could easily be made from bent wire or a part from the spares box. The fuel tanks on the preserved vehicle have strengthening bands around them which are not represented in the kit. However, these do not seem to me to be present in period photos of the prototype, so perhaps the fuel tanks currently on the Kubinka vehicle are not the original parts and they should be left as Trumpeter intended? Similarly the machine gun on the top of the fighting compartment of the preserved vehicle has grips on either side of the trigger similar to those on the American .50 calibre machine gun. These are not present in the kit, but again the gun may not be an original item. Period photos are not clear in this regard with some suggesting that there were no handles present while others suggest that there were.

The intake on the top of the engine deck could probably do with some extra detail in the form of lifting eyes and some rivet / bolt detail. The intake on the Kubinka vehicle has a perforated L section metal bar across its front edge that does not appear in the kit. I’m not sure of the purpose of this (perhaps a retaining plate), but it could probably be easily made from some thin strip with a few holes drilled in it and a few bolts made using a punch and die set.

The mounting brackets for the two cylindrical tanks on the rear of the fighting compartment seem to be simplified when compared to photos of the Kubinka vehicle. However, I think that little of this detail will be seen with the tanks in place.

It may seem that I’m being a little picky about the details, whereas in reality, I think that this is a great kit. I have a soft spot for one-off prototypes such as this and Trumpeter has provided a state of the art kit of an interesting vehicle which should prove very easy to build. Trial fitting of the larger parts shows that there will probably be no problems during construction and while there may be a few things that could be changed or added, let’s face it – that’s the fun bit!

I’m looking forward to building this kit in the near future.
Dai W.