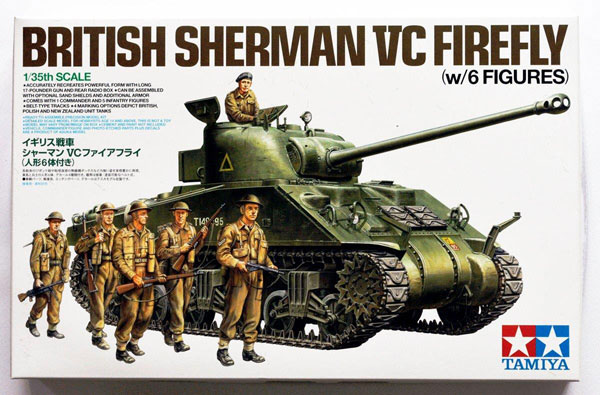 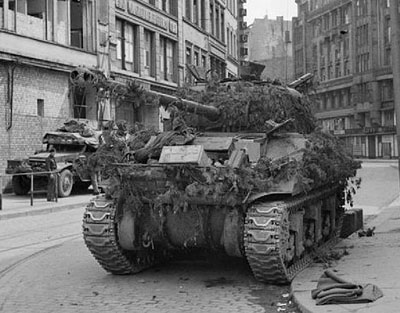 In the latter half of WWII, British troops ventured into battlefields populated with dangerous German foes such as the Tiger I and Panther, necessitating the development of their own powerful counterpart. It came in the form of the Sherman VC Firefly, which used the versatile U.S. tank M4 Sherman as a base for the big-hitting British 17-pounder gun. Even using conventional armour piercing rounds, the 17-pounder was capable of defeating the Tiger I’s frontal armour at a range of 1 kilometre.

In total over 2,000 Shermans were converted into Fireflies, their deployment in the days and months after the Normandy landings helping the Allied push on the Western front. Indeed, in addition to British units, the Firefly was also dispatched to good effect to New Zealand, Canadian and Polish forces. The VC was but one variant of the Firefly, and it was based the complex multibank inline-6 engine gasoline engine M4A4 variant of the Sherman.

Well this release from Tamiya has to be good news for Sherman fans and doubly so as it is the Tasca model re-released, but with the addition of six Tamiya British infantry figures. I am no expert on the Sherman but from reviews done by the like of Terry Ashley on the original kit it is considered to be one of the best if not the best rendition of the Firefly VC.

I will look at the vehicle first and then the figures doing the review as an in-box type with a full build to follow at a later date.

The kit comes in a sturdy box with all items except the instructions in sealed poly bags. It consists of around:

The level of detail is very good with cast texturing that includes cast numbers on many parts as well as engraved and raised details. Some of the parts are very fine and will require care when removing from the sprues. A number of options are provides for the gun travel lock, wheels, drive sprockets, armoured radio box, muzzle brake and mg plugs.

Included in the tank kit is one figure for the commander which is posed leaning on the hatch rim, he wears the tankers overall and beret, with good cloth detail and with careful painting will be very acceptable for a “kit figure”.

The six infantry figures are of an acceptable standard for Injection moulded figures and having used them once before can say, care with painting will bring these guys to life. One item that needs to be added to them is the weapon slings. 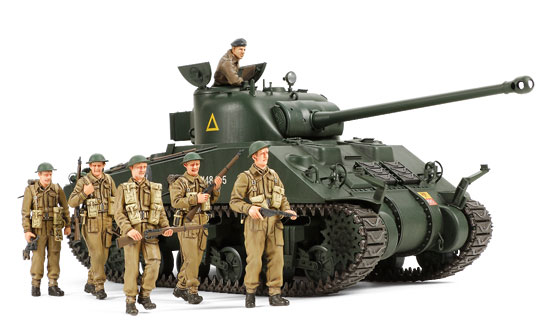 The accuracy of this kit is well within acceptable limits having checked against the upscaled plans from the Hunnicutt book on the Sherman which makes this dimensionally near perfect. 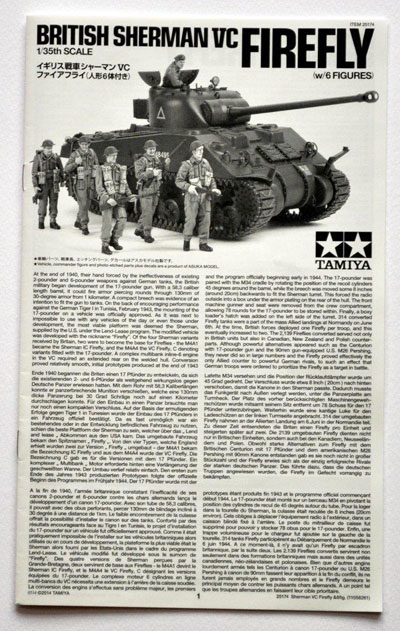 The quality of the moulding is first rate with only a minimal parting line visible and my only comment would be that there are some ejector marks but nothing the average modeller will find beyond their ability to fix.

These come in a sixteen page booklet that is well printed with easy to follow logical steps and is in the Tamiya tradition of well drawn exploded views.

The decals are well printed giving the modeller a choice of four vehicles:

All in all this looks like a nice straightforward build and with care a very nice model can be built straight from the box. As with any kit there are some areas that can be upgraded with extra detailing but for the super detailers this has to be the starting point as this kit is probably the best or near so perfect out of the box injection moulded kit. I am looking forward to making this kit with a little etch brass and maybe a metal barrel although the latter will only be my personal choice as the kit item is perfectly good. This is typical model speak but I just love metal barrels.

From a first look, this looks like an enjoyable build and I am looking to paint this well weathered.
Bill C.