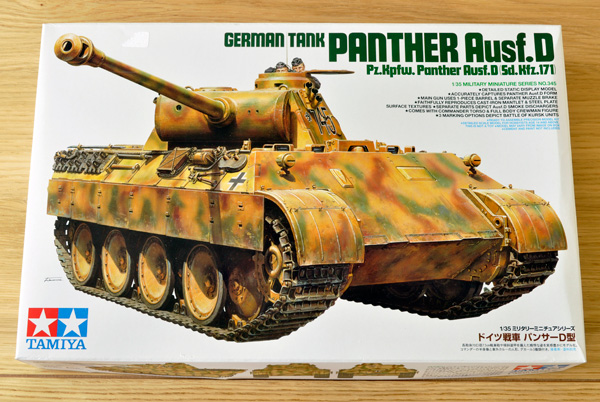 In 1976 Tamiya released a Panther Ausf A with a modified chassis for motorisation which had accuracy issues. This was followed in 1993 by an Ausf G early which was followed by a steel wheel version, both kits were accurate and a quick build. With this kit Tamiya have brought its Panther Ausf G up to date with a completely new kit with 311 parts in a dark sand colour plastic, vinyl tracks, a length of string, copper wire and two sizes of poly caps. 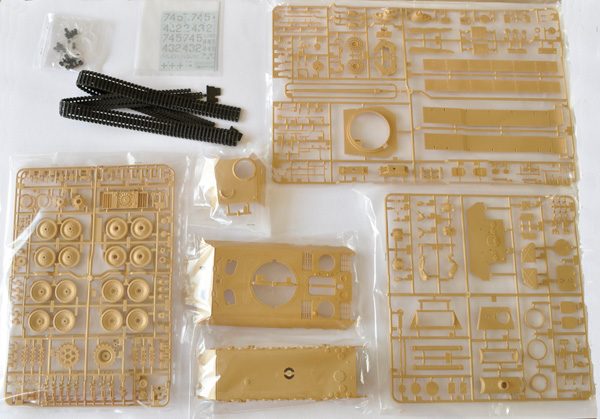 Looking at the surface detail one finds a good representation of the rolled armour and the torch cuts and weld seams are well done. The lower hull is a single hub type with separate axels which have locating tabs to ensure the vehicle sits flat on the ground. If you want it to be shown on an uneven ground the tabs will need removing and the axles given the correct position. The wheels are held in place with poly caps and the detail is very nice indeed. The tracks are vinyl with solid guide horns which is due to the moulding limitations but the quality is again good. A nice touch is that these tracks can be glued with the normal modelling adhesive. If the tracks are not accurate enough for your needs Tamiya have brought out a set on separate track links with open guide horns.

Moving to the engine deck, Tamiya give us radiator and cooling fan detail to be fitted below the engine grills. I would suggest painting these before attaching. Once again if you want more detail a separate engine kit is available as is a set of meshes for the grills in photo etch material. I have added the engine grill to my purchase but I would have liked to see these added to the basic kit as the vehicle doesn’t look right without them.


Unlike the initial Panther the sponson covers are included as are the schurzen which is a single part. If you want to show missing or damaged some surgery will be needed. The tools are well represented as are the mounting frames which come as separate items. The hull hatches for the driver and radio operator are detailed internally but this will be unseen even when opened.

The turret is excellent with all hatches and ports as separate items with the diagonal notches of the front bottom of the armour which is typical of early D’s at Kursk. The gun will elevate due to the use of poly caps. Once again Tamiya offers another extra Barrel and breech set which is a new moulding.

Finally two crew figures are included, a commander peering over the cupola while the other crouches behind the turret with binoculars. Both figures are probably the best Tamiya figures I have seen.

The decal sheet is a two colour (Black/white) with markings for three vehicles finished in soft sprayed three toned schemes.

This kit is excellent with fine surface texture and good detail which should build into a very good model straight from the box in a short timescale.
The option of addition parts is a good idea as it allows the modeller to decide just how much detail to add to your finished model. A full build article will follow in the near future. Tamiya deserve a very well done for this kit and I hope it sells well so that we can have another Panther such as the Bergepanther.