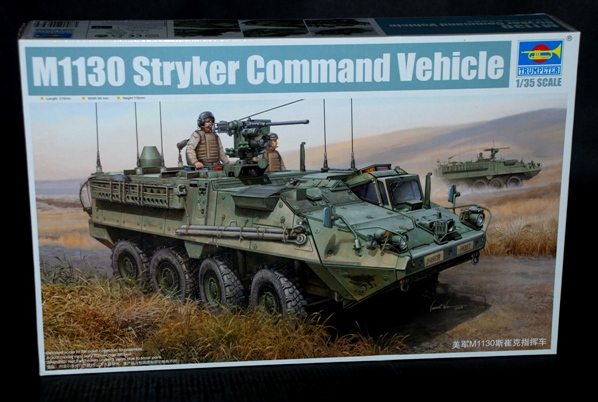 Our thanks to Models4Hobby for supplying our review sample.

In the early eighties the US Marines made a change from tracked armoured personnel vehicles to the Light Armoured Vehicle (LAV) to be able to deploy worldwide without the need of heavy lift capability.

The US Army was reluctant at first to change from its tracked vehicle and when it did want this vehicle, congress decided it should have the HUMVEE.

With the change of mission from defending a line in NATO to a more fluid type of action, the LAV was evaluated and found  to come up short for its requirements.

A trade show was held and General Motors and General Dynamics were chosen to carry out the modifications for the new vehicle, which was to be named after the Medal of Honour winner PFC Stuart Stryker. This type of vehicle comes in several versions such as the M1126 Infantry carrier and the M1130 Command Version to name but two.

Firstly the kit comes in a good sized box of strong construction, with a separate lid that some other manufacturers would do well to take note of. The kit dates back to 2007 (according to the etched brass fret included).

The kit comes on eleven sprues moulded in light grey plastic with 481 parts. The breakdown has the upper and lower hull as separate halves, clear parts, a small photo etch fret, as well as a set of rubber tyres. Nice touches included in the kit are the inclusion of foldable cartons of supplies, as well as paint masks.

I have to confess to not having any plans of this vehicle, but doing a comparison with images on the net and photographs it looks to be within proportions.

The nonslip surface is missing and the Drivers Vision Enhancer DVE is in the wrong place. For those who require the extra information to super detail, I would suggest the Wings and Wheels books (2) on the Stryker.

The quality of the kit is overall very good, with what looks like a straightforward build even with some intricate detail on the upper hull with its array of aerials, hatches, panels and pioneer tools.

There is some detail which is a little soft, such as the wheel hubs, smoke dischargers and the weapons.

The paper that the boxes are printed on is a little flimsy, so care will be needed when assembling. I would be tempted to assemble open and glue some stiffening card inside, then close the last piece over the stiffeners. 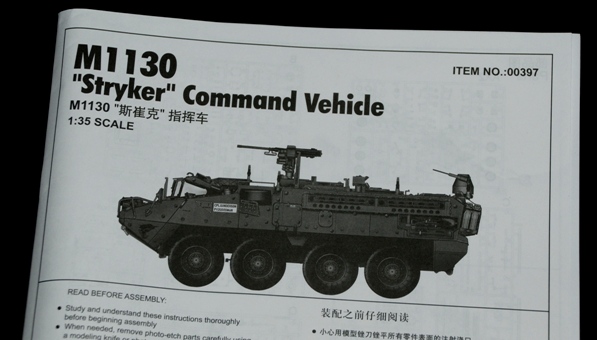 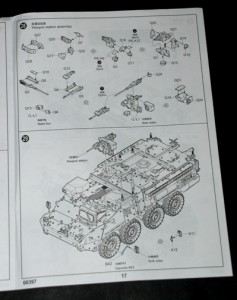 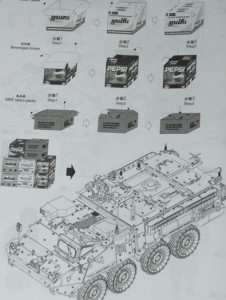 The instructions come as a booklet, with twenty pages of clear exploded line drawings in 33 steps that I found to be easy to follow.

Also included is a single sheet for the painting and markings for two vehicles both in green with a colour guide which gives the reference numbers for Mr Hobby, Model Master, Vallejo, Tamiya and Humbrol paints.

In the plastic wallet that contains the decals are the window masks and paper coloured and pre stamped for the straps used as tie downs.

Onto the decals themselves, these are well printed in five colours and are for two vehicles only which look to be thin.

Well overall I think this is a very nice kit and should build into an impressive model, which will be enhanced with the inclusion of the new commander figure, the various bedding rolls and kit as well as the various aerials on the roof.

The detail looks good and, with some painting and weathering, will bring this out to its best effect. I look forward to seeing this built and hope that Trumpeter keep on bringing out new and interesting kits that are relatively easy to build.