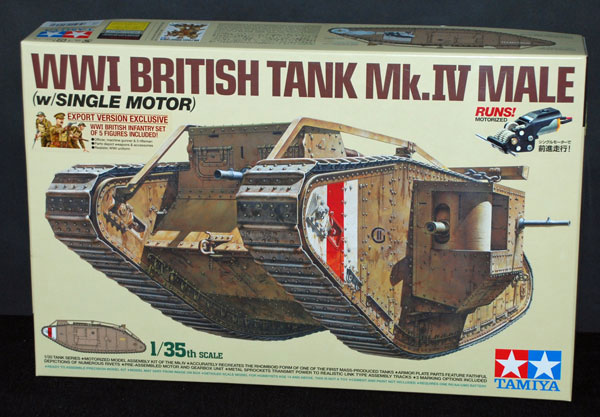 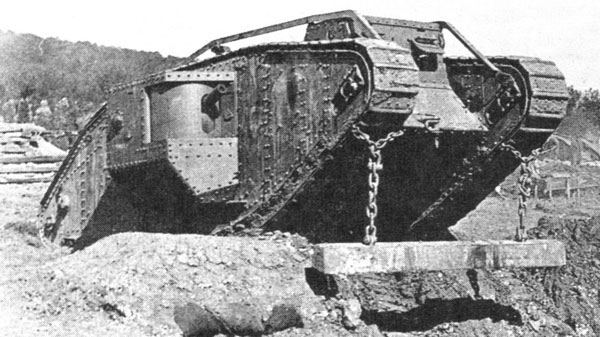 (Photo: British Mk.IV tank with un-ditching bean in 1917)
Useful info about this kit and package can be found on the Tamiya website

Here’s a little bit about the British Mk.IV Male

The Mark IV was a British tank of the World War I. Introduced in 1917, it benefited from significant developments on the first British tank, the intervening designs being small batches used for training. The major improvements were in armour, the re-siting of the fuel tank, and easier transportation. A total of 1,220 were built: 420 “Males”, 595 “Females” and 205 Tank Tenders (unarmed vehicles used to carry supplies), which made it the most produced British tank of the War.

The Mark IV was first used in mid-1917 at the Battle of Messines Ridge. It remained in official British service until the end of the War, and a small number served briefly with other combatants afterwards.

The Mark IV Male carried three Lewis machine guns – one in the hull front and two in the sponsons – as well as the two sponson guns (now shorter barrelled QF 6 pdr 6 cwt guns). The sponsons were not mirror images of each other, as their configuration differed to allow for the 6 pdr’s gun-layer operating his gun from the left and the loader serving the gun from the right. The guns had a 100 degree arc of fire but only the starboard gun could fire straight ahead. The Female had five machine guns. Two of the machine guns were operated by the gun loaders.
The decision to standardize on the Lewis gun was due to the space available within the tanks. Despite its vulnerable barrel and a tendency to overheat or foul after prolonged firing, the Lewis used compact drum magazines which could hold up to 96 rounds. The Hotchkiss was fed from a rigid strip which was trimmed down to only 14 rounds for tank use; no sooner had the machine gunner guided the fall of shot onto the target then it was time to change the strip and the process repeated. It was not until a flexible 50 round strip was fully developed in May 1917 that the Hotchkiss would become the standard machine gun for tanks again. The changes caused delays, such as adapting the design for the bulky Lewis cooling barrel, and later, problems when the Hotchkiss strips had to be stored in positions designed for Lewis gun magazines.

This tank introduced the use of the fascine, a bundle of brushwood, bound with chains, about 10 ft (3.0 m) long and 4.5 ft (1.4 m) in diameter carried on the front. It was dropped into trenches to allow the tank to more easily cross over.

A large number of these tanks were also used for development work. In an attempt to improve trench-crossing capability, the tadpole tail was introduced, an extension to the rear track horns. However, it proved insufficiently rigid and does not appear to have been used in combat. Other experimental versions tested radios, mortars placed between the rear horns, and recovery cranes. Some of these devices were later used on operational tanks. Mark IVs were also the first tanks fitted with unditching beams by field workshops. A large wooden beam, reinforced with sheet metal, was stored across the top of the tank on a set of parallel rails. If the tank became stuck, the beam was attached to the tracks (often under fire) and then dragged beneath the vehicle, providing grip.
• Crew: 8
• Combat weight: Male: 28 tons (28.4 tonnes) – Female: 27 tons (27.4 tonnes)
• Armour: 0.25–0.47 in (6.1–12 mm)
• Armament: Three MG and two 6-pdrs (Male), Five .303 Lewis MG (Female)
• Ammunition storage: 6 pounder: 180 HE rounds and remainder case.

The Mk.IV was inevitably a fairly basic design and this has been captured very well by Tamiya. Some great rivet/bolts heads and other general surface detail clearly demonstrate the quality of the tooling as you’d expect from Tamiya. The size of this tank in 1:35 is another thing that strikes you – it’s big at 230mm long by 143mm wide.
There isn’t much in the way of internal detail, mainly I guess because of the motor that comes with this packaging that’s designed to power your Mk.IV if you want a moving model! 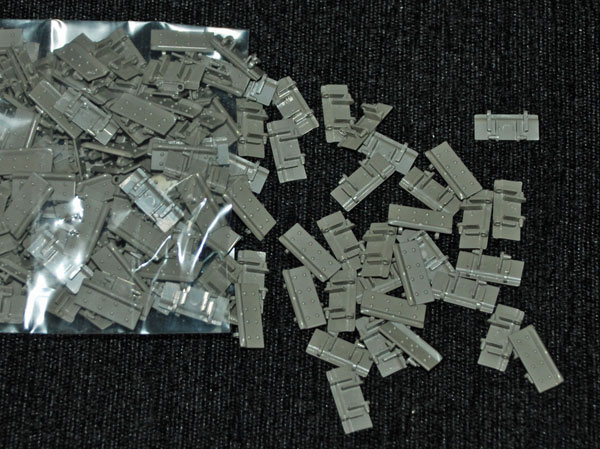 The tracks are cleverly designed and appear to just need ‘clicking together’.

Very nice that these 5 infantry figures have been included here as they will make a world of difference to your completed model if you display it on a realistic base. The figures are well moulded with good levels of moulded detail and definition. 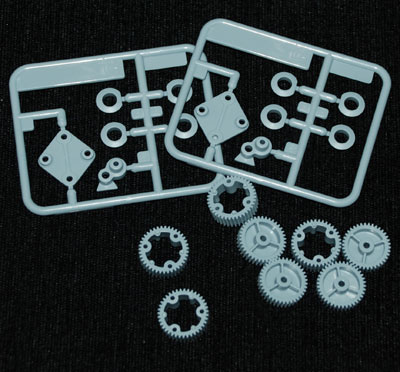 I’ve no experience of adding motors to models but what you get here certainly looks comprehensive. If you have any knowledge of these things you’ll probably be able to identify exactly what’s on offer form the photographs attached to this review. 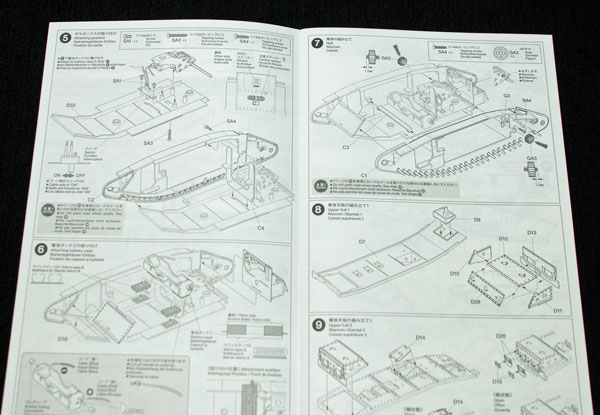 The instruction booklet is clear and logical and as usual with Tamiya instruction sheets they are helpful and informative. 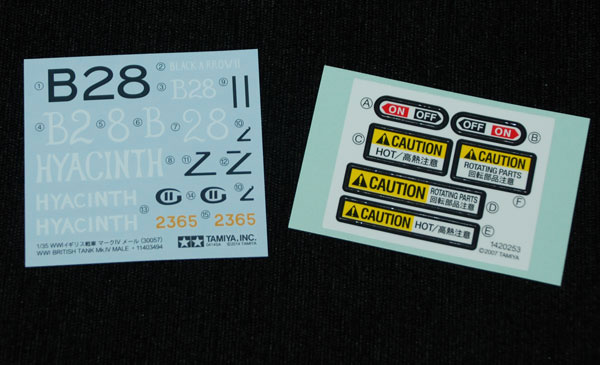