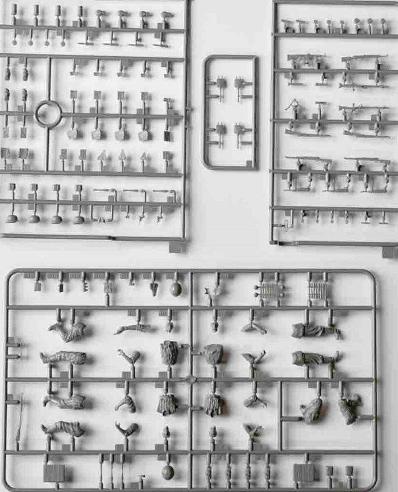 This figure kit depicts four infantry figures during the Barbarossa period of operations, one kneeling taking aim, one standing cocking rifle, one standing with grenade and the last laying with arm outstretched firing a very pistol whilst looking rearward, all being in “action” poses. The contents consist of four sprues cast in light grey plastic the largest having the figures and some equipment, the next largest sprue has personal equipment including helmets, bread bags, gas mask canisters, ammo pouches, bayonets , shelter quarters, gas cape pouches, pistols and pistol holsters with added items of grenades and mess tins. The next in size is a set of weapons of 1st generation consisting of three Mp40, four Kar98K rifles, an MG34, MG42, Gewehr 43 and a StG 44. Also included on this sprue are ammo clips, a folding stock for one MP40 and three Ammo drums for the MG’s. The last is a small sprue with four entrenching tools.

Looking at the StG 44 the barrel looks to be on the short side as does the Gewehr 43 but as both these were for a later period this may only be an issue for a later project. The figures look nicely posed and look right anatomically.

The sprues all have parting lines so a fair amount of clean up will be required including some delicate work on very small parts but nothing that the average modeller cant handle with a little patience. The two larger sprues have flash on several of the parts and the helmets on this fret looks wrong around the front part. This could be just the flash throwing out the eye but more when I use them. The sculpting of the figures clothing is very nice and should paint up very well. Looking at the build instructions I noted the gas cape was wrapped around the gas canister on figure three and I think the part is going to be almost impossible to achieve this as it is moulded flat. Judicious use of the round file or even making a new part may be the answer here or fixing to the front torso. 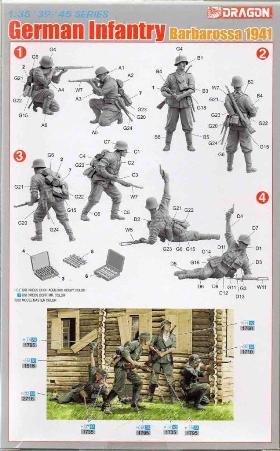 The instructions are pictorial on the rear of the box with a smaller rendition of the front artwork printed below the assembly item which is the painting guide. Careful study of the assembly items is recommended and dry fit each item before applying adhesive may save some headaches.

There are no decals in the kit that I opened but on the drawing on the front it clearly shows the helmet shields with eagle and national markings. This would have been good to have these as one now either has to source from the spares box or resort to purchasing from an aftermarket supplier.

On the whole this is a nice kit which is on a par with other Dragon kits with the exception that I think this has more flash than other recent releases and consequently will require a fair amount of clean up. The subject may not be to everyone’s liking being an action set but these do have their place and can be very useful. All figures are fully equipped as per the ‘41 invasion and a nice touch is the open neck and rolled up sleeves.