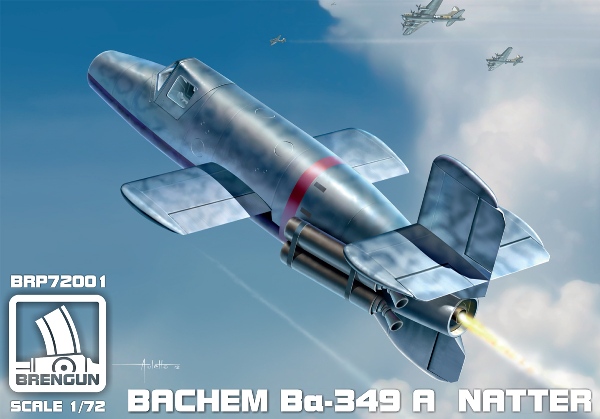 Our thanks to Brengun for supplying our review sample. Check out their website here now at: http://www.brengun.cz/

So far Brengun has been very well known mostly for producing resin and photo etched sets as well as some 1:144 resin diorama accessories. Not anymore – this February Brengun announced their first ever injected model, the Ba-349 Natter, and the kit has been released just a week or two ago. As I manage to be on the right place in the right time, I’ve been given one of the first production kits. It was so new in fact, that they even didn’t have the boxes for it delivered from the printing factory.

The Natter (“grass snake”) was meant to be cheap, easy to manufacture fighter-interceptor powered by a rocket engine for destroying of large formation of heavy bombers. At the end of the second world war Nazi Germany lacked most of so called strategic materials needed in aircraft industry (aluminium etc.), so the Natter was built mostly from wood with fuselage and wings covered with plywood. The plane was powered with Walter HWK 109-509A rocket engine, four additional rocket boosters where used during a vertical start – yes, this aircraft was actually the first manned rocket.  After a vertical auto-piloted climb to cca 30000 feet the pilot should take the control, attack the bomber formation in a dive with a battery of unguided missiles mounted in the front part of the fuselage, then decelerate by climbing again (there would no fuel at the moment), separate the cockpit section from the engine section (using a miniature blast) and eject. The engine section should land safely using a parachute, so it could be used again.

The project lacked time and the trials started in 1944 by towing a unpowered Ba-349 by Heinkel He-111. These tests checked the basic flight capabilities. The plane was successfully launched by the end of year 1944 – in a hurry and with a dummy figure instead of a pilot. The first and at the same time the last manned flight ended up with a disaster on March 1, 1945. The pilot, Lothar Sieber, was killed. The exact cause of the catastrophe remains unknown. Another few successful launches with dummy figures were conducted in April 1945 and the project ended with the end of the war.

Even though this is a short run kit, the parts are nice and clean. There are minor issues with some parts, but these can be easily solved by using a sanding stick or fine file. The kit is very simple and consists of 41 parts in just one sprue moulded in grey plastic. A clear plastic canopy as well as tiny photo etched fret with gun sight and seatbelts is provided as well. All panel lines are deep and sharp enough. The canopy is bit thick, but that’s common for all short run kits. On the other hand, injected canopies are much easier to use than vacform ones. Anyway, the cockpit is so tiny, that not much of it will be visible either.
Click each picture to enlarge or reduce:

The instructions are clear and will guide you through the entire build. The decal sheet is small and consists mainly of special markings used to recognise the position of the plane from the ground during an unmanned test. Basic stencils are provided as well. All the colours are in register and the decals itself seem to be thin. 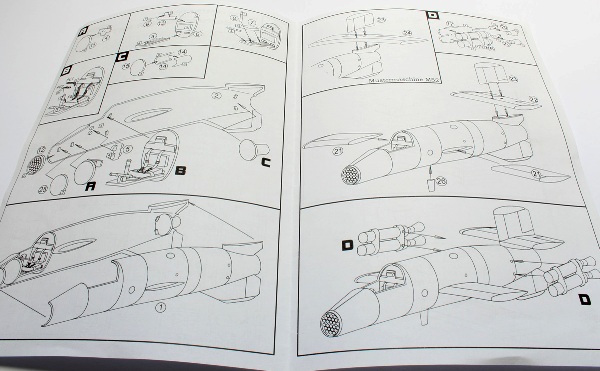 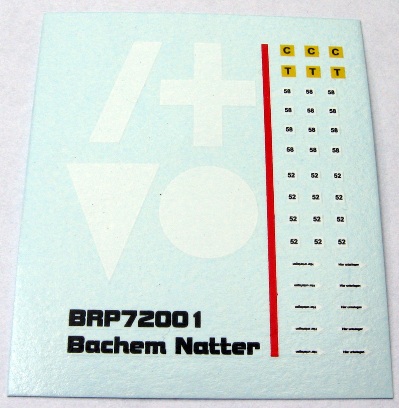 I’ve been able to find a real subject photo only for the first option and it seems that the colour used was much darker than usual RLM 02. It’s hard to tell the exact shade from an old black and white photograph, but I think something like RLM 74 (dark grey) would be more appropriate for this option. I also think it is a bit pity that the kit doesn’t provide a marking for the first, however tragic, manned flight. 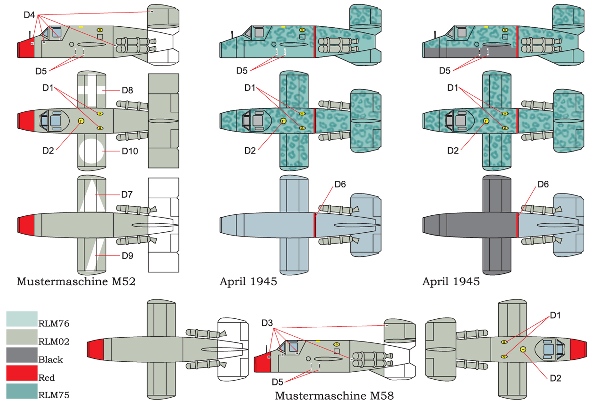 A very interesting subject in a very reasonable quality. My first impression of looking at the parts was: “Oh man, this kit is so nice and simple that I want to build it right now”. And I think the build shouldn’t take more than one or two evenings. Do you want to find out? :-)