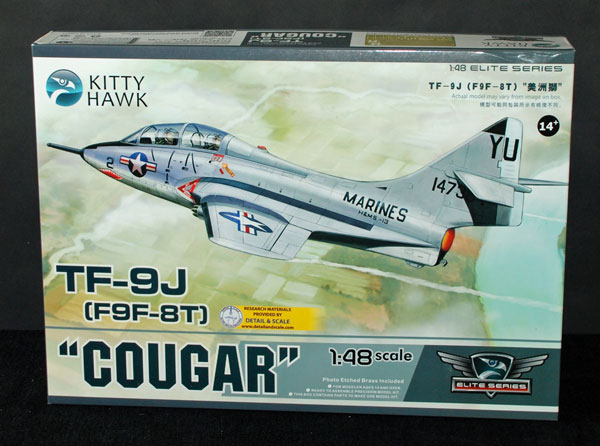 We are very pleased to receive this new release of the famous Grumman Cougar, in TF-9J configuration – others versions will be available. Before we get stuck into the review, here’s a little bit of background to the type.

The Grumman F9F/F-9 Cougar was an aircraft carrier-based fighter aircraft for the United States Navy. Based on Grumman’s earlier F9F Panther, the Cougar replaced the Panther’s straight wing with a more modern swept wing. The Navy considered the Cougar an updated version of the Panther, despite having a different official name, and thus Cougars started off from F9F-6 upward.


Markings for this aircraft are included in the Kitty Hawk kit. 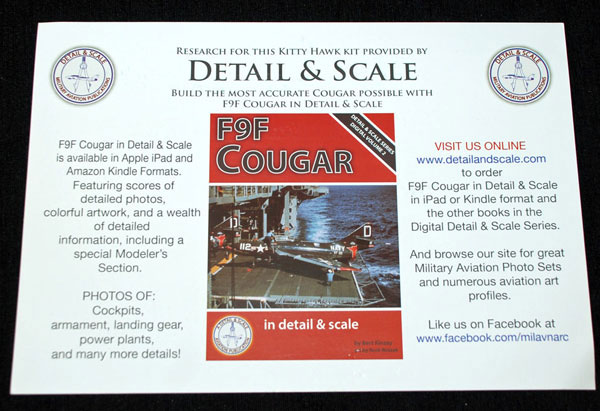 There seems only one reference that you’ll need for this project – the excellent new e-book on the type from in Detail & Scale – simply stunning and you get a flyer for this in the Kitty Hawk Kit. We are preparing a separate review for the in Detail & Scale book that’ll be available shortly in SMN – so keep an eye out for that.

In Detail & Scale has produced a fantastic reference for the F-3H Demon and you will get a good idea about what to expect, and a lot more in their Cougar publication by taking a look at the Demon title.

Onto the Kitty Hawk kit

You immediately notice the number of parts – typical for Kitty Hawk Model kits.

We do have one full build so far for a Kitty Hawk kit – the F-35B in 1:48 here and expect to see many more over the months and years. Also you’ll find several box-reviews of Kitty Hawk models in Here Now. 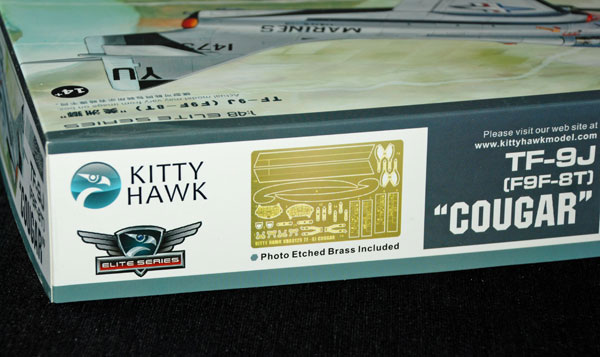 Back to the TF-9J Cougar kit – you’ll notice that this is the two-seat version with a single seat kit on the way too. This is a multi-media offering and in your box you’ll see a large decal sheet covering 4 very different aircraft – 3 US and one Argentinian.

The surface detail looks to be well done with fine recessed panel lines and other surface detail like rivets and so on. Due to the breakdown of parts for the fuselage (to cater for the single and two-seat kits) you’ll need to watch your joins taking care to minimise the need for filling or sanding as nice detail could be lost.

The overall shape looks good to me and the photo of the real aircraft above shows that it compares well to what’s in the kit, as far as I can see at this stage at least.

Moving into the cockpit

The ejection seats look nice and the seat harness for each is provided in PE that will just need painting and weathering. Some of the detail in the cockpit is a little soft, the side wall sections being a case in point – I notice that these have ejector pin marks that’ll need to be removed; a little odd that these weren’t designed to appear on the back of the part to make the build more enjoyable.

Decals are provided for the main and side instrument panels, although an option that is included is PE instrument panels and these could work well if carefully painted and weathered. The ‘raised’ detail on these looks just about 3-D but we’ll see how Dave C gets on in his build of this model that’s coming soon to SMN.

Canopy mirrors are included on the PE fret – a nice touch.

A nice feature is the fact that you can pose your completed model with the wings folded and this is an attractive option. Detailed wing-fold inserts are provided to make this area look convincing.

Multiple stores are also included in the box and you can clearly see these in the gallery photos attached here. I particularly like the wing rocket pods they’ll look very different and I notice they are fitted to the aircraft seen in flight above. Fuel drop tanks, AAMs are also in the box.

Not a lot to say here other than detail looks ok to me – some prominent mould seams on the wheels will need careful removal but that shouldn’t present any difficulty.

The ventral speed brakes are detailed and could be posed open and the bays are well detailed so these areas, along with the undercarriage bays will look good when painted and weathered. 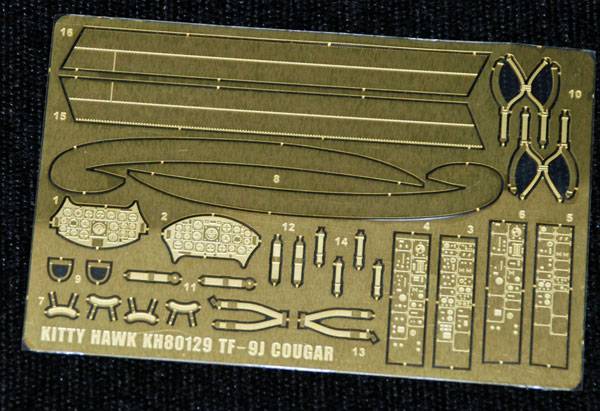 The remaining Photo Etch (PE) covers the upper wing inserts and over wing fences – the latter will make a big difference to your model, so it’s great they are in here too.

As one can see these clear parts are crisply moulded and very good quality. They look fairly simple to mask. This is good as there are no pre-cut masks in the kit.

You can see from the photos that the assembly sequence shows the creation of the separate nose section that’s designed to be completed and then added to the main centre fuselage section. Not too sure how this will work in practice and I just hope that the fit is good and clean – again, Dave C will reveal all in his build.

It may be worth exploring different assembly options if you are an experienced modeller as I’m sure you will anyway but, as ever, the suggestions in the instructions such as adding the folded wings at Stage 14 before you’ve attached the nose section seems bizarre to me and asking for trouble! 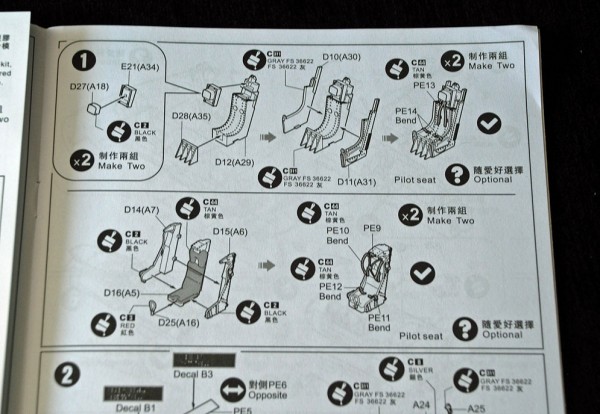 As you can clearly see in the above gallery photos, 4 different options are included. I know from Julian’s build that’s nearly done of his HKM T-6 Texan in 1:32 that the decals have been troublesome, the main issue seems to be trying to slide the decals when wet on application in the usual way. Let’s hope there are no such issues this time.

As for colour density, and what’s provided, very good with stencil data included too.

I think you can see from what’s above that this looks like a comprehensive and detailed package. Much will become clear during the full build we are about to undertake, so keep an eye on Build Now for that and, when the model is finished, Finished Now later on.

The breakdown of parts is complex with separate nose and upper fuselage sections and I just hope that that all fits together well – if it does then this is going to be a cracking build of an important Grumman aircraft.