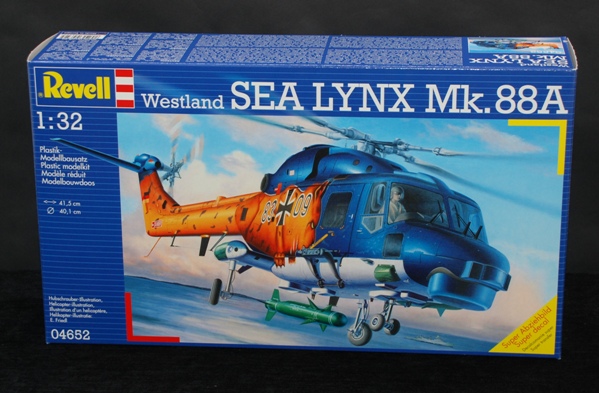 The Lynx is a British multi-role helicopter used primarily for military purposes. It operates worldwide. Built by Westland Helicopters the Lynx undertook its maiden flight 1971 and has taken part in all British military conflicts since 1982. Due to its high reliability, performance and versatility, it is in service in 14 countries. The Sea Lynx has been in service with MFG 3 (Naval Aviation Squadron) “Graf Zeppelin” in Nordholz since 1981. Its equipment and weapons are designed for anti-submarine warfare and extend the “eyes and arms” of the frigates. Its armament consists of two torpedoes or Sea Skua missiles and a 12.7 mm machine gun. Further equipment includes a variable depth sonar. The Sea Lynx is currently used on operations combating piracy around the Horn of Africa. In September 2006 one helicopter was painted in a particularly attractive livery to commemorate the anniversary of “25 years of the Ship-borne Helicopter Sea Lynx” and it’s this scheme that is featured on Revell’s decal sheet included with this model.

A 1:32nd scale Westland Sea Lynx eh? Definitely something to get excited about, especially when you add to that the fact that it is a completely new-tool model and that price… I don’t normally make much of the price of new models here in SMN, mainly because it is such a subjective thing, but every now again we have a kit that smacks you in the face because it is either just ridiculously over-priced (like the Hasegawa 1:48 Seaking in RAF markings) or, in this instance, a model that looks just too good to be true, but, as it turns out, exceptional value for money. Read on…