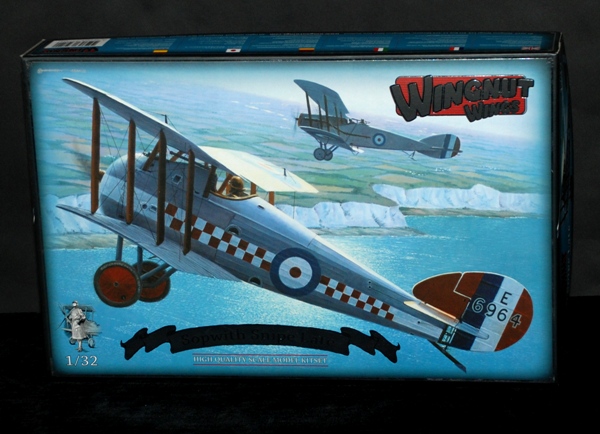 Following on from their successful Pup, Triplane, Camel and (slightly less successful) Dolphin, Sopwith’s next major contribution to British aviation was the 230hp Sopwith 7.F1 Snipe. The prototype Snipe appeared in September 1917 and was designed to be powered by a 110hp to 150hp rotary engine, featured single bay Pup like wings with a cut away centre section (similar to the Dolphin) for improved visibility, a Camel style tailplane with unbalanced rudder and a flat sided fuselage. Interestingly 300 production aircraft were apparently erroneously ordered at about the same time as 6 further prototypes (numbers B9962-B9967) were requested in October 1917 (the production order was subsequently cancelled). The 6 prototypes featured many changes from the original design and B9965 (now with longer wingspan 2 bay wings with increased dihedral, a 230hp Bentley BR.2 engine, faired fuselage sides and a revised tailplane with a balanced rudder) was sent to France in March 1918 for further evaluation where additional changes were suggested, including increasing the size of the rudder further.

Full scale production was ordered from numerous manufacturers in late March 1918 but it was not until October that sufficient aircraft were available to fully equip 43 Sqn RAF and 4 Sqn AFC (Australian Flying Corps) in France. Despite its operational use during the First World War being restricted to the final few weeks, the Snipe performed excellently in combat.

I would recommend that you look at the previous Wingnut Wings Here Now and Finished Now reviews available in your SMN – you’ll see what an amazing job WW is consistently doing with each new release and this one – the Sopwith Snipe (Late) is easily up there with its forerunners. I built this manufacturer’s F.2b Bristol Fighter and found it the most challenging and rewarding scale model project I have ever undertaken. The Snipe has a more straightforward design and consequently should be more straightforward to construct. At least the lower wing is directly attached to the underside of the fuselage, unlike the F.2b! And there’s less rigging too!

Looking at the breakdown of the parts-assembly it all looks logical and if you’ve completed any WW kit you’ll recognise the whole approach. Presentation of the whole package is second to none. This really looks like it would make an ideal entry into the world of Wingnut Wings and 1:32 bi-plane scale modelling if you are a newbie or relatively new to this type of subject in this scale.

Click on the images below to enlarge / reduce the pictures:

Levels of detail are superb and highly appropriate for 1:32 scale. The open cockpit will allow all that wood in the cockpit to be seen and admired. The engine is largely encased in the cowling so not a lot of that will be visible, although the lovely wooden prop will be. High levels of detail, crisp clean moulding – you just want to start cutting and building it!!

Only a small need this time for the moulded in stitching – a great idea and in my opinion that looks good on your finished model but limited need here with the Snipe.

The wings have excellent ribbed detail moulded in and if you check out the multiple WW builds in SMN you’ll see just how well this can be painted and weathered to create a realistic effect. In addition, check out Dave C’s completed Rumpler build in Finished Now.

The insides of the fuselage have some basic moulded detail applicable to the type and the whole look and feel of the interior is a bit like the Gloster Gladiator – just a feel but it gives you an idea of what to expect.

The one-piece upper and lower wing sections will make assembly and lining up the struts, wings and fuselage much, much easier than having these parts separate and I see this as another big plus. The pre-drilled holes for the struts go further in easing the construction phase – great stuff!

These are another highlight, especially as the MG that will look good when painted gunmetal. Four small bomblets are included that will add a little extra interest if fitted.

More on the cockpit… plus PE

I think that this is going to be a bit of a highlight with this release and the familiar cage, control column, seat and instruments will all look great when viewed from above. The seat harness is supplied as photo etch (PE) and this is great having used these WW brass items before. You’ll see from the photos that other small items are provided on the PE fret like the gun sight and other small details.

The Wingnut Wings (WW) instruction booklet is one of the big highlights with any WW kit and this one is no exception – quite superb. Full colour illustration and diagrams give very clear instructions as to where everything goes. Good use is made of different colours to make identification and placement of all parts – and rigging later in the book, straightforward.

There are also several period images in black and white and these give a very clear steer as to weathering possibilities later in the project. Add to that the all colour walkaround images covering all aspects of the airframe and you have a five-star guide to completing your WW Sopwith Snipe (Late).

There are several great colour options for your Snipe:

You could always go for the Soviet option – how different would that look? There are some lovely small stencils too that will add the finishing touch to your markings. Excellent quality decals if a little thick; colour density looks good as does accuracy.

There is no doubt that Eduard are pioneering some superb WWI models in 1:48 scale – Revell has some perhaps surprisingly good ones in 1:72 and Silver Wings cannot be ignored either in 1;32, I recently built their very nice Siskin. Wingnut Wings though has set a very high bar indeed for 1:32 and is unequalled in all elements of their package. The whole package is available post-free from WW at a staggering US$ 69.00 (around £46.00 GBP at the time of writing), amazing value for money. These models are available from Hannants in the UK, but check the pricing first to make sure you get the best price and service and compare with WW own website.