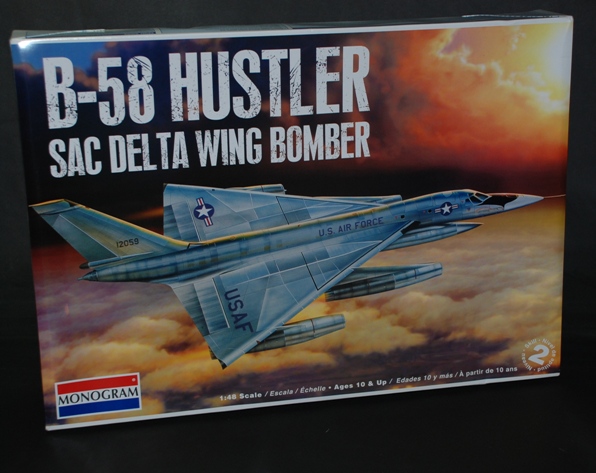 Check this one out…

Yes I know that I am now supposed to be the ship builder and the bi-plane obsessive, but my other peccadillo is things that are silver; I must have been a Magpie in a different life!

By things silver, I mean aircraft in natural metal. I think thus far my best work in this field has been my 1:32nd Trumpeter F-100 but the SU-7 wasn’t too shabby either, albeit the kit was!

I have long been a fan of Century Series fighters and indeed USAF aircraft of the 50s and 60’s.

But top of my list has to be the magnificent B-58 Hustler. Its lines and sheer brute force is so evocative of the US attitude to the Cold War in the 1950s and this aircraft looks like it means business. It had a brief film role too, albeit wasn’t seen, in the really chilling film Fail Safe, with Henry Fonda placed in an impossible dilemma when a squadron of B-58s are sent by accident to bomb Moscow.

Key in the film is that the Russian fighters couldn’t keep up with, let alone catch, the B-58s. Designed and built in 1958 (same as yours truly), this beautiful aircraft has long held a place in my heart and one I have longed to build, but ridiculously never got around to.

You can imagine my joy when Geoff, only this Tuesday, throws a Monogram version of the Hustler at me and says Merry Christmas! Such a nice guy and with no ulterior motives; very special indeed!

Interestingly, I already have some accessories for this kit in the form of resin after-burner cans, flaps and ejection seat from Fisher Models.

I also have a new and fabulous decal sheet offering some interesting schemes from Mike Grant in Canada and some SAC metal undercarriage, but like Geoff I have doubts about their actual value either, or even in, their strength as the white metal bends without too much effort!

I will be building this kit and giving it a ‘good seeing to’, but I have a pile to do for SMN just now so it’ll be a 2012 project for me but it will be a special one so keep your eyes out.

Click on the Thumbnails below to enlarge images and explore the contents for yourself!

The lid and tray style box is typical Monogram, with a robust corrugated tray that’s ideal to keep bits and sub-assemblies in during construction.

The cover painting is very evocative, not brilliant but nevertheless says ‘buy me’. I have to say though, the Revell box art is better. The box sides also have photos of the finished model, which are quite nice but do show up some of the key issues with the kit; panel lines being one.

Nevertheless, I’d still be very tempted to buy it so well done all round Monogram/Revell.

I am generally a big fan of Revell but I simply loathe their instructions; with an over emphasis on icons, illogical build sequencing and a paint guide that is limited to their colours only, if that!

Couple this with an incredibly poor aesthetic, as they are printed on a grey thin paper with a heavy and crude use of drawing. Not pleasant!

This kit though seems to have Monogram instructions in it, which are a bit better but the paint guide simply gives a colour i.e. Matt Black, with no reference to any paint manufacturer or FS number.

This isn’t good in a modern kit and places them, in terms of instructions, at the back of the queue.

The kit has only 125 parts, which is largely down to the aircraft being simply a triangle with four engines slung underneath.

I recall the original was moulded in silver plastic, this one is in light grey which is good because it’s easier to work on and identify gaps or flaws.

Sprues are heavy and some gates are large and will need careful removal to prevent part damage. Flash is largely absent which given this kit was first released in 1985 says much about Monogram’s excellent moulding then, almost 30 years ago!

The kit has raised panel lines and no rivet detail at all. The real aircraft has recessed panel lines and, of course being a 50’s jet, was covered in flush rivets too. This will be the first job when I get to build this beast.

Detail is sparse; the cockpit being rudimentary with a only a single ejection seat, which for the time isn’t bad but needs work or replacement.

There is nothing in the kit for the two crew places behind the pilot, but given that there is no option to open their ‘canopies’ and having almost no glazing isn’t a major loss. If, as I might, you open up the canopies then some considerable scratch-building will be required, as well as 3 of Fisher‘s resin seats.

The undercarriage is heavy and robust, but the tyres and hubs are poor and there are a lot of them. Not sure what I will do here!

The engine pods are enormous; I love them. They will need some work to thin the intakes and re-scribing is a must.

The afterburners are a huge feature on this aircraft and again these are only adequate in the kit so the Fisher or, if you prefer, Aires resin replacements are in my view essential to accuracy and doing your model and the aircraft justice.

The wings are simply an acre of plastic that are bland and covered in raised panel lines. It will be essential to re-scribe and rivet them and to polish after to a high gloss for a natural metal finish. I will look forward to that!

The canopy looks OK; it just needs a good polish. 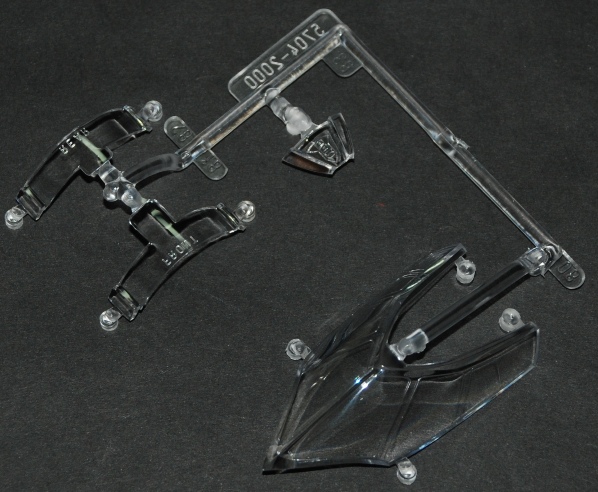 As to fit, I will have to see but Monogram is good normally.

That huge under-fuselage pod so reminiscent of the type is included, as are a raft of nuclear weapons to hang off the pylons. But, as I have never seen a photo of an aircraft with these loaded, I won’t be using them.

The decals are good.

Two options are offered, but are perhaps not the most inspired choices of the schemes available for this aircraft. Colour though is good as is accuracy.

Stencils, some anyway, are included as is a very nice instrument panel. They look a little thick and there’s some notable carrier film, but I have a good feeling about them. I will use a few in my chosen scheme so I will let you know how they perform.

It looks like a Hustler and that works for me.

References and other reviews I have read seem to concur that it’s about right; my concern is about the rear gun, which doesn’t seem correct but I think everything else is about right.

I will look again when I build it, but whatever the situation it is the only game in town.

This is a good kit of an amazing subject.

I am delighted it’s still available and I will be giving it my full attention in 2012. Yes, it has its flaws, but for a 30-year-old model, it really is not that bad at all.

I am excited about the prospect of building this one so watch this space.