Our thanks to Wingnut Wings for supplying our review sample. Get this impressive kit here now at Wingnut Wings

Rarely has a Great War biplane kit been so anticipated as this, the Sopwith Camel. Wingnut Wings has established itself at the top of the tree in scale modelling terms, producing outstanding packages. Everything you need to complete a variety of finishes is in the box that includes:

We have reviewed multiple kits from this manufacturer and you can find all these in Aircraft-Here Now-Kits – just click the manufacturer link: Wingnut Wings (WW) in the right panel.

What do you get this time around?

Frankly, more of the same! More of the same perfectly moulded grey plastic parts, several options for propeller and wheel choice, plus of course, no less than 5 great and varied colour schemes to finish your model in.

The whole package follows the exact same format as their previous releases and so I’ll show you the full set of photos below that shows everything in the box.

These are just that – very clear and unblemished.

A small PE fret is included with a set belt and a few other small details. 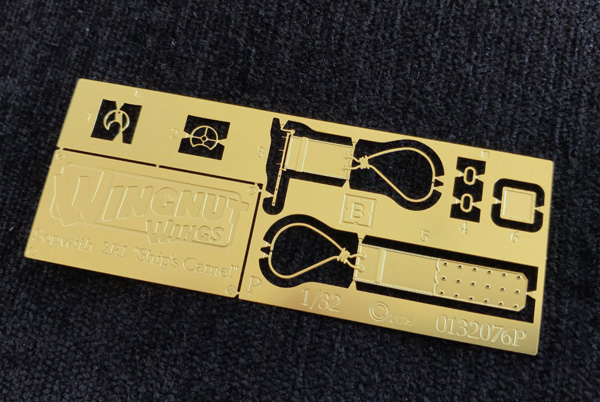 This is an exceptional-looking package. The Camel isn’t a complicated aircraft and the kit captures the look and design of the original extremely well in my opinion.

Everything is moulded to a high standard, there’s no flash or excel plastic anywhere and mould seam lines too are almost invisible – happy days!

Yes, it’s a book! Plenty of excellent reference photographs too as well as logical and practical sectional assembly diagrams. What I’ve learned from building these kits is to follow the instructions to the letter and all goes well. They are actually useful as assembly instructions, unlike so many manufacturers’ instruction sheets that give you an idea of what to do but if you actually followed them you’d end up in disaster! Never the case with these WW instruction books in my experience.

The decals are exceptional quality with great opacity, colour and all in register with a highlight being the small stencil markings that’ll look just great on your finished model.

As you’ll see, I have given this model the maximum 5-Star rating across the board – this is rare indeed and I pride SMN on being completely objective. I don’t care who has sent us a model, it will get an objective and constructive assessment and this max-rating is highly deserved.
Geoff C.

A little bit of background to the Sopwith Camel

The Sopwith Camel was a British First World War single-seat biplane fighter aircraft introduced on the Western Front in 1917. It had been developed by the Sopwith Aviation Company as a successor to the earlier Sopwith Pup and would become one of the most iconic fighter aircraft of the First World War.
The Camel was powered by a single rotary engine and was armed with twin synchronised machine guns. Though proving difficult to handle, it provided for a high level of manoeuvrability to an experienced pilot, an attribute which was highly valued in the type’s principal use as a fighter aircraft. In total, Camel pilots have been credited with the shooting down of 1,294 enemy aircraft, more than any other Allied fighter of the conflict. Towards the end of the Great War, the type had also seen use as a ground-attack aircraft, partially due to it having become increasingly outclassed as the capabilities of fighter aircraft on both sides was rapidly advancing at that time.

The main variant of the Camel was designated as the F.1; several dedicated variants were built for a variety of roles, including the 2F.1 Ship’s Camel (the subject of this WW kit), which was used for operating from the flight decks of aircraft carriers, the Comic night fighter variant, and the T.F.1, a dedicated ‘trench fighter’ that had been armoured for the purpose of conducting ground attacks upon heavily defended enemy lines. The Camel also saw use as a two-seat trainer aircraft. In January 1920, the last aircraft of the type were withdrawn from RAF service.

Photo: United Kingdom: England, Gloucestershire, Leighterton. Captain A. H. Cobby , DSO, DFC and two Bars sitting in the cockpit of Sopwith Camel fighter aircraft. He was officially credited with the confirmed destruction in combat of twenty nine machines, the highest number of any Australian airman of the First World War and therefore Australia’s leading “Ace”. Note the chequered paint scheme on this aircraft which indicated its pilot was an instructor at the time. Cobby noted that this was “the best Camel he could find” and he flew it regularly during his posting to Number 8 Squadron (training) at Leighterton. (Photo courtesy Australian War Memorial Collection)