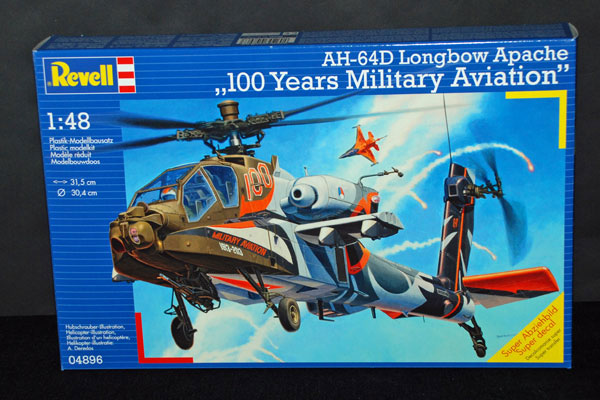 Revell model kits are available from all good toy and model retailers. For details visit Carrera Revell UK
Good footage to get you in the mood for your build!

Apart from the excellent photos above (courtesy of James Vaitkevicius – thanks James), some great walkaround pics covering the internal and external details of the type are listed under ‘A’ (Apache AH-Mk.I – similar to the AH-64D) in your Photo Reference Library.

The Boeing AH-64 Apache is a four-blade, twin-engine attack helicopter with a tail wheel-type landing gear arrangement, and a tandem cockpit for a two-man crew. It features a nose-mounted sensor suite for target acquisition and night vision systems. It is armed with a 30 mm (1.18 in) M230 Chain Gun carried between the main landing gear, under the aircraft’s forward fuselage. It has four hardpoints mounted on stub-wing pylons, typically carrying a mixture of AGM-114 Hellfire missiles and Hydra 70rocket pods. The AH-64 has a large amount of systems redundancy to improve combat survivability.

The Apache originally started as the Model 77 developed by Hughes Helicopters for the United States Army’s Advanced Attack Helicopter program to replace the AH-1 Cobra. The prototype YAH-64 was first flown on 30 September 1975. The U.S. Army selected the YAH-64 over the Bell YAH-63 in 1976, and later approved full production in 1982. After purchasing Hughes Helicopters in 1984, McDonnell Douglas continued AH-64 production and development. The helicopter was introduced to U.S. Army service in April 1986. The first production AH-64D Apache Longbow, an upgraded Apache variant, was delivered to the Army in March 1997. Production has been continued by Boeing Defence, Space & Security; over 1,000 AH-64s have been produced to date.

The U.S. Army is the primary operator of the AH-64; it has also become the primary attack helicopter of multiple nations, including Greece, Japan, Israel, the Netherlands and Singapore; as well as being produced under license in the United Kingdom as the AugustaWestland Apache. U.S. AH-64s have served in conflicts in Panama, the Persian Gulf, Kosovo, Afghanistan, and Iraq. Israel used the Apache in its military conflicts in Lebanon and the Gaza Strip; British and Dutch Apaches have seen deployments in Afghanistan and Iraq.

The AH-64D Apache Longbow, is equipped with a glass cockpit and advanced sensors, the most noticeable of which being the AN/APG-78 Longbow millimetre-wave fire-control radar (FCR) target acquisition system and the Radar Frequency Interferometer (RFI), housed in a dome located above the main rotor. The radome’s raised position enables targets detection while the helicopter is behind obstacles (e.g. terrain, trees or buildings). The AN/APG-78 is capable of simultaneously tracking up to 128 targets and engaging up to 16 at once, an attack can be initiated within 30 seconds. A radio modem integrated with the sensor suite allows data to be shared with ground units and other Apaches; allowing them to fire on targets detected by a single helicopter.

The aircraft is powered by a pair of uprated T700-GE-701C engines. The forward fuselage was expanded to accommodate new systems to improve survivability, navigation, and ‘tactical internet’ communications capabilities. In February 2003, the first Block II Apache was delivered to the U.S. Army, featuring digital communications upgrades.

The Japanese Apache AH-64DJP variant is based on the AH-64D; it can be equipped with the AIM-92 Stinger air-to-air missiles for self-defence. 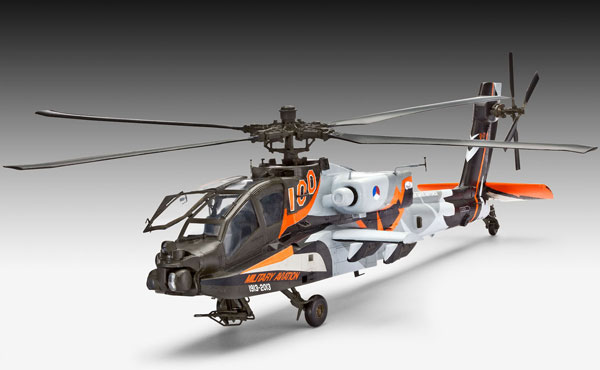