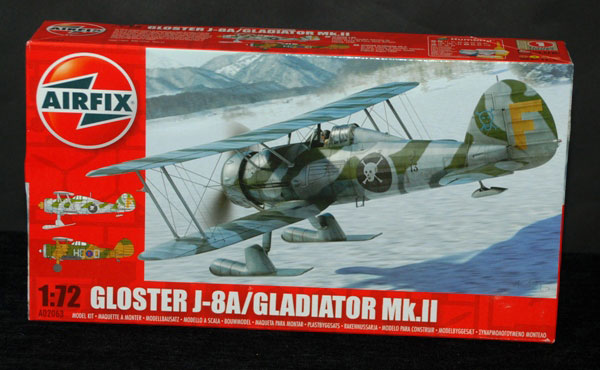 The Gloster Gladiator occupies an important place within the history of the RAF. The last of the RAF’s biplane fighters, the Gladiator had some modern features, such as an enclosed cockpit, a first for an RAF fighter, as well as an armament of four machine guns.

Still in service at the outbreak of the war, the Gladiator proved to be a capable biplane fighter, but was outclassed against modern monoplane opposition. The mount of some the RAF’s most famous pilots, such as Pat Pattle and Roald Dahl, preserved Gladiators can still be seen flying today at Duxford and Old Warden air displays.

Besides the FAF Gladiators, the Swedish Voluntary Air Force, responsible for the air defence of northernmost Finland during the later part of the Winter War, was also equipped with Gladiator fighters, designated as J8s (Mk Is) and J8As (Mk IIs) by the Swedes. The Flying Regiment F 19 arrived in Finnish Lapland on 10 January 1940, and remained there until the end of the hostilities. It fielded 12 Gladiator Mk II fighters, two of which were lost during the fighting, and five Hawker Hart dive bombers, plus a Raab-Katzenstein RK-26 liaison aircraft and a Junkers F.13 transport aircraft. The aircraft belonged to and were crewed by the Swedish Air Force, but flew with Finnish nationality markings. The Swedish Gladiators scored eight aerial victories and destroyed a further four aircraft on the ground. One concern was expressed when F 19’s executive officer Captain Björn Bjuggren wrote in his memoirs that the tracer rounds of the Gladiator’s machine guns would not ignite the gasoline when penetrating the fuel tanks of Soviet bombers. 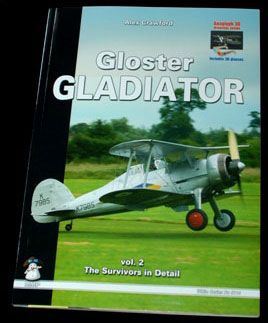 You may have seen my review of the recently released Gladiator Mk.I by Airfix and this is essentially the same kit, this time with options for the Mk.II and very interestingly the Swedish J-8A. First impressions are pretty good as this kit is an all-new tool and that is good news at any time. There is a very innovative construction method in this new kit – for example the four cabane struts as a unit to help align the top wing accurately.

Interestingly, this model came in the same shipment as the brand new Gloster Javelin buy as you’ll when you look at that review this isn’t in the same league as that model; here we still have those heavy part-gates on the sprues and heavier (yet still acceptable) panel line detail.

The tyres in this kit come with the option for a slightly weighted appearance on one side, but this is hardly visible and probably a good idea as they were kept inflated to high air pressures making any ‘bulging’ hard to pick out in some images.

The rectangular moulded shapes on the fuselage sides look slightly over scale and just need to be sanded back a little to look less obvious.

The cockpit tub has decals for the main instruments and this is ideal in this scale, with a seat that’s simple and will be enhanced by the addition of a scratched or etched seat harness. Some detail is moulded into the fuselage side and, again, this is fine for the scale; a nice touch is the option for an open access door.

I really like the subtle hollowed out exhaust pipes and the detail on the engine collector ring is very neat – separate outlet pipes being well tooled. The oil cooler grill on the right side of the engine cowl is finely tooled. The pair of under wing MGs in their gondolas are also neat, although the barrels will need some careful cleaning up.

Usefully the front windscreen is moulded separately to the rear portion that can easily be displayed open – nice touch in this scale and this will allow you to add additional detail. In fact two separate canopies are included – one with the armour-plated windscreen fitted to some aircraft.