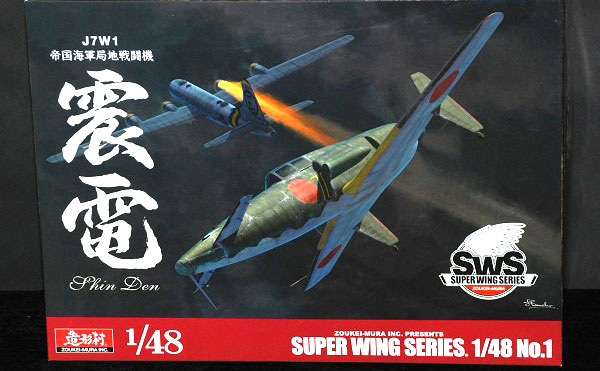 A bit about the Shin Den “Magnificent Lightning”…

The Kyūshū J7W1 Shinden fighter was a World War II Japanese propeller-driven aircraft prototype that was built in a canard design. The wings were attached to the tail section and stabilizers were on the front. The propeller was also in the rear, in a pusher configuration.

Developed by the Imperial Japanese Navy (IJN) as a short-range, land-based interceptor, the J7W was a response to B-29 Superfortress raids on the Japanese home islands. For interception missions, the J7W was to be armed with four forward-firing 30 mm cannons in the nose.

The Shinden was expected to be a highly manoeuvrable interceptor, but only two prototypes were finished before the end of war. Building a gas turbine–powered version was considered but never even reached the drawing board.

The “J-” designation referred to land-based fighters of the IJN and the “-W-” to Watanabe Tekkōjo, the company that oversaw the initial design; Watanabe changed its name in 1943 to Kyūshū Hikōki K.K.

The idea of a canard-based design originated with Lieutenant Commander Masayoshi Tsuruno, of the technical staff of the IJN in early 1943. Tsuruno believed the design could easily be retrofitted with a turbojet, when suitable engines became available. His ideas were worked out by the First Naval Air Technical Arsenal (Dai-Ichi Kaigun Koku Gijitsusho), which designed three gliders designated Yokosuka MXY6, featuring canards. These were built by Chigasaki Seizo K. K. and one was later fitted with a 22 hp Semi 11 (Ha-90) 4-cylinder air-cooled engine.

The feasibility of the canard design was proven by both the powered and unpowered versions of the MYX6 by the end of 1943 and the Navy were so impressed by the flight testing, they instructed the Kyushu Aircraft Company to design a canard interceptor around Tsuruno’s concept. Kyushu was chosen because both its design team and production facilities were relatively unburdene and Tsuruno was chosen to lead a team from Dai-Ichi Kaigun Koku Gijitsusho to aid Kyushu’s design works.

The construction of the first two prototypes started in earnest by June 1944, stress calculations were finished by January 1945 and the first prototype was completed in April 1945. The 2,130 hp Mitsubishi MK9D (Ha-43) radial engine and its supercharger were installed behind the cockpit and drove a six-bladed propeller via an extension shaft. Engine cooling was to be provided by long, narrow, obliquely mounted intakes on the side of the fuselage. It was this configuration that caused cooling problems while running the engine while it was still on the ground. This, together with the unavailability of some equipment parts postponed the first flight of the Shinden.

Even before the first prototype took to the air the Navy had already ordered the J7W1 into production, with quotas of 30 Shinden a month given to Kyushu’s Zasshonokuma factory and 120 from Nakajima’s Handa plant. It was estimated some 1,086 Shinden could be produced between April 1946 and March 1947.

On 3 August 1945, the prototype first took off, with Tsuruno at the controls, from Itazuke Air Base. Two more short flights were made, a total of 45 minutes airborne, by war’s end. Flights were successful, but showed a marked torque pull to starboard (due to the powerful engine), some flutter of the propeller blades, and vibration in the extended drive shaft.

You certainly get an impressively well-packaged kit with plenty of separate bags and packaging to protect the refined grey plastic sprues.

You’ll be able to see all the sprues and parts in the galleries that follow so take your time studying them and you’ll see what a finely tooled product that’s on offer.