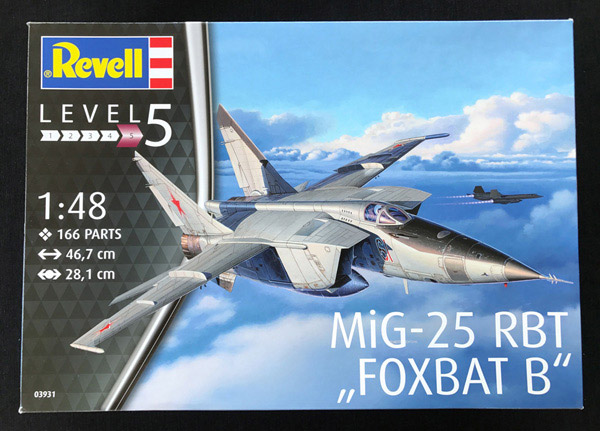 Here’s a little bit of background to the type

The Mikoyan-Gurevich MiG-25 (Russian: Микоян и Гуревич МиГ-25; NATO reporting name: Foxbat) is a supersonic interceptor and reconnaissance aircraft that was among the fastest military aircraft to enter service. It was designed by the Soviet Union’s Mikoyan-Gurevich bureau, and built primarily using stainless steel, one of the few combat aircraft to do so. It was the last plane personally designed by Mi-khail Gurevich before his retirement.

The first prototype flew in 1964, and the aircraft entered service in 1970. It has an operational top speed of Mach 2.83 (Mach 3.2 is possible but at risk of significant damage to the engines), and features a powerful radar and four air-to-air missiles. When first seen in reconnaissance photography, the large wing suggested an enor-mous and highly manoeuvrable fighter, at a time when U.S. design theories were also evolving towards higher manoeuvrability due to combat performance in the Vietnam War. The appearance of the MiG-25 sparked serious concern in the West and prompted dramatic increases in performance for the McDonnell Douglas F-15 Eagle then under development in the late 1960s. The capabilities of the MiG-25 were better understood in 1976 when Soviet pilot Viktor Belenko defected in a MiG-25 to the United States via Japan. It turned out that the aircraft’s weight ne-cessitated its large wings.

Production of the MiG-25 series ended in 1984 after completion of 1,190 aircraft. A symbol of the Cold War, the MiG-25 flew with Soviet allies and former Soviet repu-blics, remaining in limited service in Russia and several other nations. It is one of the highest-flying military aircraft, and the second fastest after the SR-71 recon-naissance aircraft.

The MiG-25 Foxbat is another iconic type from the Cold War and recent years and it’s good to see it back in 1:48 scale. This model is in fact the ICM kit and that was, on the whole a very good kit. As ever, some have criticised certain aspects of the shape, but really, it looks perfectly presentable to me and I’m sure many of you too. Certainly panel line detail is ex-cellent as is the quality of the plastic and lack of flash on the parts.

The Revell box artwork is usually impressive enough and that’s the case here even though it has to be said the box is disproportionately huge compared to the contents and even has stiff cardboard inserts to strengthen it.

Well moulded light grey sprues are supplied and taking the main components first, they are well tooled, fine recessed panel line detail and good levels of detail across the board. No distortion on the main parts is apparent and a dry fit of the multi-part main fuselage sec-tions suggests a decent fit; the initial impression is one of detail parts that will go to make up a nice representative model in 1:48 scale. No real evidence of excess flash on the parts supplied in this kit.

Raised detail on the cockpit panels is provided as well as decals – the cockpit looks pretty reasonable from the box. The other internals like the control columns are well detailed too as you can see from the attached photos and will add a fair bit to the eventual look. The seat looks a representative shape of the original.

You get a decent depth tube for the exhaust jet pipes along with the detailed reheat nozzles typical of the type – a real feature of the MiG-25 Foxbat.

• undercarriage units are well detailed and the model seems to sit correctly when viewed from different angles
• wheel wells offer basic detail that will satisfy most modellers
• the huge centreline drop tank is supplied but no other weapons/stores – a little disap-pointing
• ‘dropped-flaps’ option – flaps are provided so you can pose them in the dropped position or closed up. I think they look great deployed even if they aren’t strictly accurate or in ac-cordance with SOPs (who cares, if your model looks better to you!)
• rudder can be positioned offset 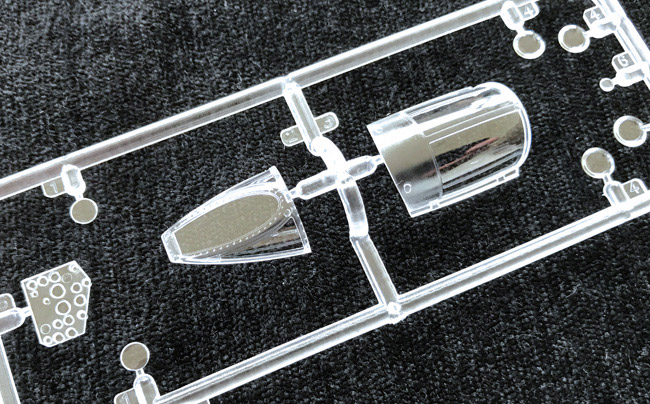 The clear parts look clear and defect-free. Looking at the completed manufacturer’s model the canopy fit looks ok. It’s nice to be able to display your model with canopy open or closed.

The Revell instructions look is pretty clear. Location of parts is clear but colour paint coding is for Revell paints only. You’ll have to match your own choice of paints if you go elsewhere for your choice of colour. The build sequence is pretty standard and logical but many model-lers will part company with the stated order to suit their experience.
The back of the box has additional colour and painting guidance and all in all the instructions are definitely a step forward for Revell over their pretty basic instructions included so far. 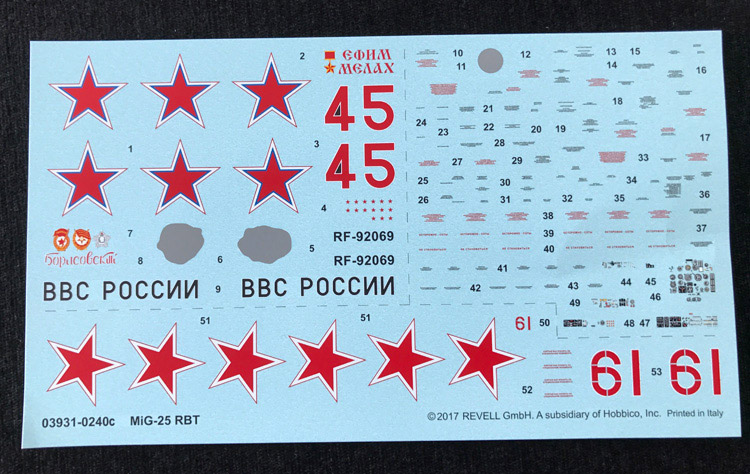 Good quality of offer here. Markings in register and colour looks good. Two Russian MiG-25s are included on the sheet.

This is a great subject and it’s very good to have the MiG-25 widely available agin in quarter scale. This model will provide all military fans, especially those with an interest in Russian and Cold War aircraft or modern military subjects with a great new addition to their collec-tion.
The model itself looks to be well engineered from the dry/test-fit. Moulding is good and the recessed panel detail very good as is the detail overall. The absence of any weapons is dis-appointing although if you’ve bought any of the other new kits of Russian types by other manufacturers, then there’s a fair chance you can raid your spares box for what you need.
Geoff C.