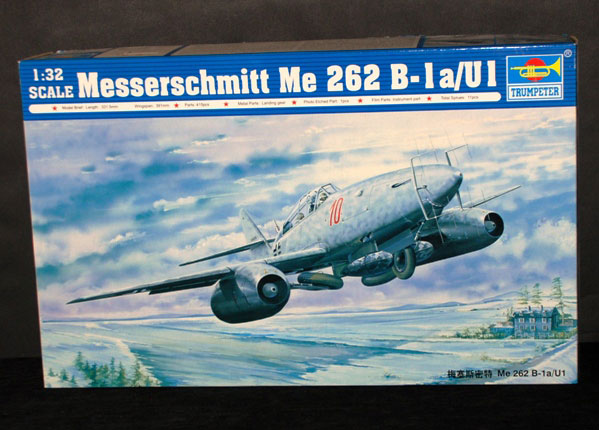 Intro to this review

It won’t escape many of you that the date for my review is after this model first hit the shops and that’s because this is my next project as I write and you can follow it in Build Now and then when finished in Finished Now. It always is a good opportunity to plug a gap in Here Now by subsequently adding a review like this so that you can all access it should you take this kit on as a project.

The Messerschmitt Me 262 Schwalbe (English: “Swallow”) was the world’s first operational jet-powered fighter aircraft. Design work started before World War II began, but engine problems prevented the aircraft from attaining operational status with the Luftwaffe until mid-1944. Compared with Allied fighters of its day, including the British jet-powered Gloster Meteor, it was much faster and better armed. One of the most advanced aviation designs in operational use during World War II, the Me 262 was used in a variety of roles, including light bomber, reconnaissance and even experimental night fighter versions. Several two-seat trainer variants of the Me 262, the Me 262 B-1a, had been adapted through the Umrüst-Bausatz 1 factory refit package as night fighters, complete with on-board FuG 218 Neptun high-VHF band radar, using Hirschgeweih (“stag’s antlers”) antennae with a set of shorter dipole elements than the Lichtenstein SN-2 had used, as the B-1a/U1 version. Serving with 10 Staffel, Nachtjagdgeschwader 11, near Berlin, these few aircraft (alongside several single-seat examples) accounted for most of the 13 Mosquitoes lost over Berlin in the first three months of 1945. However, actual intercepts were generally or entirely made using Wilde Sau methods, rather than AI radar-controlled interception. As the two-seat trainer was largely unavailable, many pilots made their first jet flight in a single-seater without an instructor.

Despite its deficiencies, the Me 262 clearly signaled the beginning of the end of piston-engined aircraft as effective fighting machines. Once airborne, it could accelerate to speeds over 850 km/h (530 mph), about 150 km/h (93 mph) faster than any Allied fighter operational in the European Theater of Operations.

Personally, this is one of my favourite combinations of type and scheme ever and I have been looking for an opportunity / slot to get into it and that’s just come along at the right time; so what of the kit…