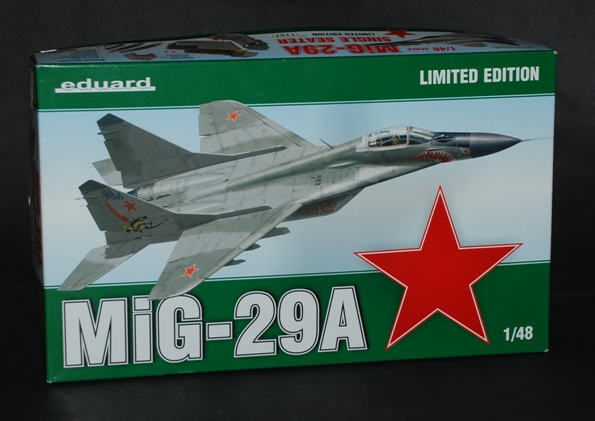 Something to ‘wet your whistle’…

Keep an eye out in Build Now – you won’t have to wait very long for this one to get going!

The MIG-29 can be traced back to the late 1960’s, when news of the F-X program (soon to be the F-15 Eagle) was leaked to the Russians. Obviously, the USSR could not be left behind in the Cold War arms race so the General staff wrote a requirement for a new fighter of their own, known as Perspektivnyy Frontovoy Istrebitel (PFI, or Advanced Frontline Fighter).

This requirement stated that the proposed aircraft was to have the ability to land and take-off from small, rough airstrips, have a useful combat radius, a quick turnaround time and be able to carry a varied payload. The aerodynamic design of the aircraft was mainly carried out by the Russian Aerodynamics Institute TsAGI, in partnership with Sukhoi.

However, in the early 70’s it was decided that different types of fighter aircraft would be needed and the PFI program was supplemented with the PLFI (Perspektivnyy Lyogsky Frontovoy Istrebitel, or Advanced Lightweight Frontline Fighter).

This was very much along the same lines as the Americans, who had supplemented the F-15 program with the development of the F-16. The PFI fighter was assigned to Sukhoi, which led to the SU-27 Flanker, while the PLFI went to the Mikoyan design bureau. Work began on what was to become the MIG-29 in 1974, with the first flight of the type taking place on 6 October 1977. The MIG-29A entered frontline service in late 1984.

As the MIG-29 was developed from the same parameters as for the original PFI specification, it is aerodynamically similar to the larger SU-27. Mainly constructed from aluminium with some small areas of composite materials, it has a mid-mounted blended swept wing with Leading Edge Root Extensions (LERX) that also blend into the wing.

There are swept tailplanes and twin vertical tails, both of which are mounted on booms outboard of the two afterburning Klimov RD-33 Turbojet engines. These are contained in separate ‘pods’ that form a tunnel under the fuselage, similar to the F-14 Tomcat. The engine intakes are rather ingenious, with automatic intake doors that close on the ground and a set of louvers on top of the fuselage that open to prevent the ingestion of FOD (Foreign Object Debris) on rough airstrips and therefore prevent damage to the massive engines.

The wings are rather conventional, with automatic leading edge slats and traditional ailerons and flaps on the trailing edges. An all-moving tailplane provides pitch control at all airspeeds and angles-of-attack. A conventional hydraulic system provides power to all of the control surfaces, as opposed to a more modern Fly-By-Wire system as used in the SU-27.

Nonetheless, the MIG-29 is a very agile aircraft with excellent instantaneous and sustainable turning performance, a high Angle-Of-Attack capability and a high general resistance to spinning. The airframe is stressed to handle +9g of acceleration forces.

A single GSh-30-1 30mm cannon in the port wing root can be supplemented by AA-10 Alamo medium range AAM’s, AA-11 Archer short range AAM’s or the older AA-8 Aphid short range AAM’s. Unguided GP bombs can also be utilised, with later airframes being upgraded to carry guided weapons. External tanks can also be carried. The centreline tank has a unique feature in the form of an exhaust duct being mounted through the middle of it to allow the belly-mounted Auxiliary Power Unit to still be used with the tank fitted.

The MIG-29 is currently in use by approximately 25 nations including Russia, Poland, Ukraine, Iran and the USA even managed to acquire a few for evaluation purposes. If you have the money, a private company in Moscow also sell backseat flights to civilians. Now, that would be fun!

Click Thumbnails to enlarge/go back and see what you think!

In my very humble opinion, Eduard are showing themselves to be masters of the multi-media kit genre. With this release, they have taken the fairly nice Academy tooling and supplemented it with an absolutely phenomenal amount of their Brassin resin items, pre-painted and ‘plain’ photo etch (there is nothing plain about Eduard PE, but I hope you know what I mean!), canopy masks and a stunning sheet of Cartograph decals containing 5 different marking options and a multitude of stencilling.

The Academy plastic consists of 148 well moulded blue-grey styrene parts and 5 of clear, including a seamless windscreen and canopy – a very good effort for a modern canopy rendition. The main parts have some very fine surface detail in the form of nicely produced engraved panel lines and some good rivet detail in the appropriate places.

Unfortunately, there are some rather large ejector pin marks on some visible areas, especially inside of the intake trunking. There is enough space to remove these without too much struggling though. Cockpit and undercarriage bay/leg detail is pretty basic, but the latter can be jazzed up easily enough and the former can well and truly be put in the spares box, or the bin!

This leads me nicely onto the Brassin parts, consisting of 29 light grey and 4 clear red resin items. The moulding of these really has to be seen to be believed! Have a look at the Gallery Grid above and you should be able to see what I mean.

The detail is so fine and crisp it is almost unbelievable. You get a full cockpit and ejector seat (with multi-part PE instrument panel and seat harnesses), vertical fin fillets with optional chaff/flare dispensers, red anti-collision lights and even a helmet with separate ear speaker cups to fit inside.

This little lot looks brilliant and I hope I can do it all justice!

As previously mentioned, two sheets of photo etch are supplied, in the usual Eduard quality. Multi-part IP, seat harnesses and a myriad of external details are beautifully represented. A piece of clear film is also supplied, from which you can form the HUD glass; much nicer than a thick piece of clear styrene. The paint masks are of the usual top-notch quality, being die-cut and providing for the main transparencies and the wheels.