Something to get you in the mood…

Check out your SMN Photo Reference Library, where you’ll find a great detailed walkaround set of images all taken with the scale modellers in mind – some fantastic close ups of all the hard to get at areas like the cockpit and other areas of the Harrier airframe.

This kit has been built!

It’s definitely worth taking a good look at Finished Now, where there’s multiple builds of the various Airfix Harrier models – including this one by James V. 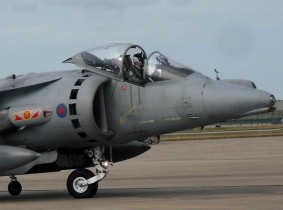 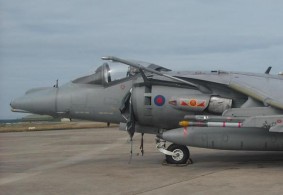 During their deployments to Afghanistan, the Harrier proved very capable of hitting targets accurately and quickly, saving the lives of many ISAF personnel.

In October 2010 it was announced that the Harrier fleet was to be retired in 2011, making the GR-9 the last variant of the type. Many will mourn the passing of this highly capable aircraft that had so much more to offer those commanders and soldiers in the field.

Taking everything into account, this was a poor decision by the MOD as far as this Editor is concerned. 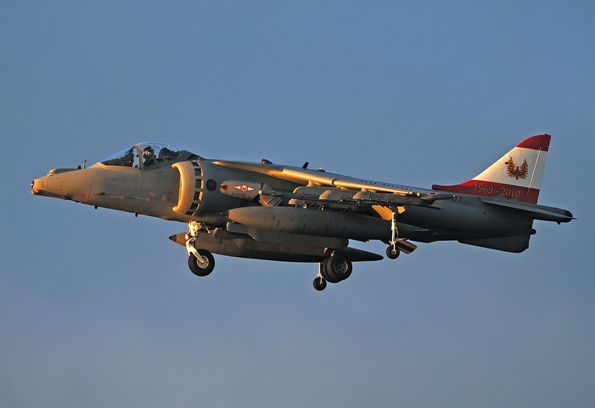 First impressions are good, as this kit is an all-new tool which is good news at any time.

The sturdy box weighs a lot and so promises a lot and I for one have not been disappointed with the contents. James V takes you through the whole build and generally the build experience is very positive. The box art is very evocative and screams – “buy me!”, which I’m sure many of you have!

Click on the Thumbnails below to enlarge the images and have a look for yourself.

The sprues are full of well detailed, often very delicate parts that look very impressive. The panel line detail is quite fine, maybe slightly heavy for the scale, but very presentable and sharp. No flash to speak off visible and plenty of options for different stores load-outs; this is getting better all the time.

As I say, some of the parts are delicate and an example is the option for a deployed IFR probe – I think this is a superb bit of tooling and moulding.

The outrigger stabilising wheels are another example and with careful handling and painting the finished model will look excellent. There are weighted tyres that look good, as does the precise detail on the wheel hubs. Further examples of great, delicate moulding are the lovely AIM-9L/M Sidewinder AAMs and control column in the cockpit.

Moving into the cockpit, this is well detailed for the scale with some raised detail on the side consoles and main panel. No decals are included for these panels. The MB ejection seat is a decent scale replica, although you can add a harness to enhance it further. The rear decking is good for the scale.

The ventral air brake has detail on its inner face is displayed in the familiar drooped position. This goes for the separate flaps, which will also enhance your model no end if offset. Quality goes on into the main gear bay that details too.

Usefully the front windscreen is moulded separately to the rear portion that can easily be displayed open. A nice touch in this scale. 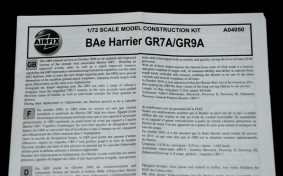 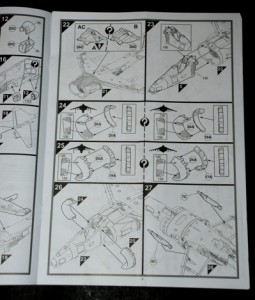 These follow the usual exploded stage diagrams and are clear and straightforward. Some good advice is given about the optional intake rings and the open/closed square doors so typical of the type. Check out the reference images and you’ll see what I mean.

These are very impressive and I suggest you take a look at James Vs build in Finished Now to see how he got on with these. They are the new style printed in Italy and of much higher quality than of old – great stuff.

Furthermore, the choice of schemes provided is spot on, giving you a variety of options from GR-7A to GR-9A aircraft and one even for an aircraft of the final flight schemes.

Airfix have done a great job with this kit. It embodies so much of what we hoped they would achieve going forward and sets a high standard that we will now expect to see in all they. The ratings I give in the table below should sum it up!