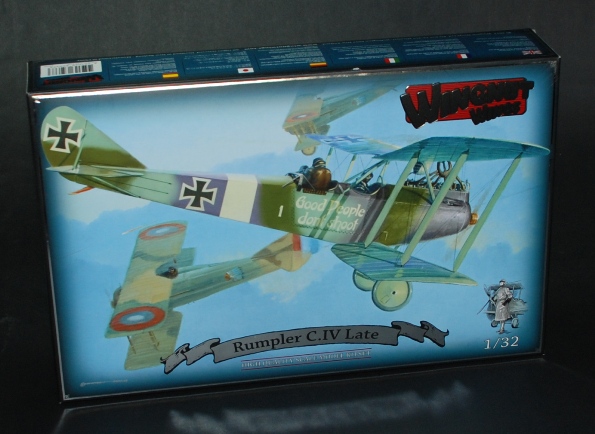 The Rumpler C.IV was a German single-engine, two-seat reconnaissance biplane. The C.IV was a development of C.III with different tail surfaces and using a Mercedes D.IVa engine in place of C.III’s Benz Bz.IV. In addition to the parent company, the aircraft was also built by Pfalz Flugzeugwerke as the Pfalz C.I. Another variant of the basic design was the Rumpler 6B-2 single-seat floatplane fighter, with a 120 kW (160 hp) Mercedes D.III engine, built for the Kaiserliche Marine (Imperial Navy).

For a two-seater reconnaissance aircraft, Rumpler C.IV had an excellent performance, which enabled it to remain in front-line service until the end of World War I on the Western Front, as well as in Italy and Palestine. Its exceptional ceiling allowed pilots to undertake reconnaissance secure in the knowledge that few Allied aircraft could reach it.

I would recommend that you look at the previous Wingnut Wings Here Now and Finished Now reviews available in your SMN – you’ll see what an amazing job WW is consistently doing with each new release and this one – the Rumpler C.IV (Late) is easily up there with its forerunners. I built this manufacturer’s F.2b Bristol Fighter and found it the most challenging and rewarding scale model project I have ever undertaken. The Rumpler C.IV has a more straightforward design and consequently should be more straightforward to construct. At least the lower wing is directly attached to the underside of the fuselage, unlike the F.2b!

Looking at the breakdown of the parts-assembly it all looks logical and if you’ve completed any WW kit you’ll recognise the whole approach. Presentation of the whole package is second to none.

Levels of detail are superb and highly appropriate for 1:32 scale. The open cockpit will allow all that wood in the cockpit to be seen and admired. The engine and that metallic, square radiator will look superb when painted and weathered. This is definitely one of the many highlights in this kit – high levels of detail, crisp clean moulding – you just want to start cutting and building it!!

The fuselage has the moulded in stitching – a great idea and in my opinion better than trying to add this separately from photo-etch the way some manufacturers go.

No less than four different prop blades are included, depending on the version you are interested in building, but more of the excellent choice of decals later.

The wings have excellent ribbed detail moulded in and if you check out Les’s builds you’ll see just how well this can be painted and weathered to create a realistic effect. In addition, check out Dave C’s completed build in Finished Now. 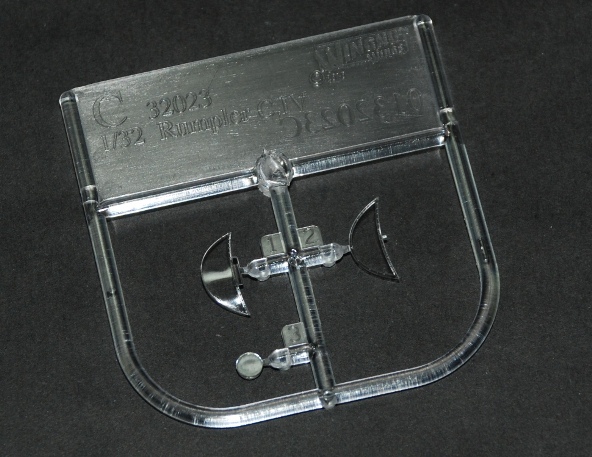 These are another highlight, especially as the perforated cooling jackets for the guns are included on the PE set – nice touch. Even the crew handguns for the cockpit are beautifully delicate (see photos above) and so you may well want to use what’s provided rather than going elsewhere for brass replacements.

The Wingnut Wings (WW) instruction booklet is one of the big highlights with any WW kit and this one is no exception – quite superb. Full colour illustration and diagrams give very clear instructions as to where everything goes. Good use is made of different colours to make identification and placement of all parts – and rigging later in the book, straightforward.

There are also several period images in black and white and these give a very clear steer as to weathering possibilities later in the project. Add to that the all colour walkaround images covering all aspects of the airframe and you have a five-star guide to completing your WW Rumpler C.IV (Late).

There are multiple well known ‘Jasta’ options on the decal sheet; all are excellent as are the decals if a little thick. Colour density looks good as does accuracy with some fantastically colourful markings for each option leaving you no choice but to create a stunner that will stand out on any club or competition table.

There is no doubt that Eduard are pioneering some superb WWI models in 1:48 scale – Revell has some perhaps surprisingly good ones in 1:72 but when it comes to 1:32, Wingnut Wings takes the prize. The whole package is available post-free from WW at a staggering US$ 99.00 (around £62.00), amazing value for money. These models are available from Hannants in the UK, but check the pricing first to make sure you get the best price and service.