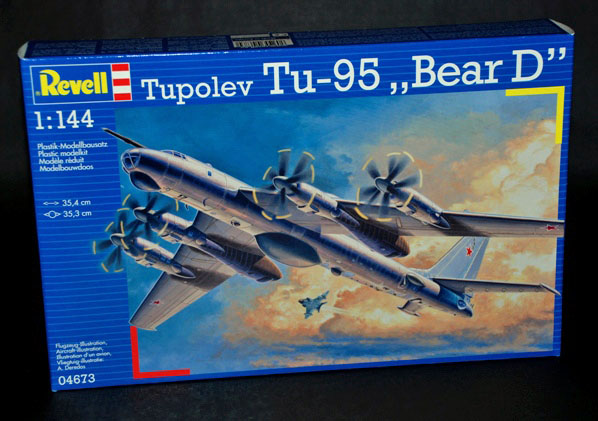 The Tupolev Tu-95 (Russian: Туполев Ту-95; NATO reporting name: “Bear”) is a large, four-engine turboprop-powered strategic bomber and missile platform. First flown in 1952, the Tu-95 entered service with the Soviet Union in 1956 and is expected to serve the Russian Air Force until at least 2040. A development of the bomber for maritime patrol is designated Tu-142, while a passenger airliner derivative was called Tu-114.

The aircraft has four Kuznetsov NK-12 engines, each driving contra-rotating propellers. It is the only propeller-powered strategic bomber still in operational use today. The tips of the propeller-blades move faster than the speed of sound, making it one of the noisiest military aircraft.[2] Its distinctive swept-back wings are at a 35° angle.

The model is produced in silver plastic that’s not everyone’s cup of tea. The surface detail looks heavy, especially for the small 1.144 scale. Check out the photo of a real Tu-95 above and you’ll see that although there are metal panels in different shades, hardly any panel lines are visible. Personally, I think that the panel lines may prove too deep for many.