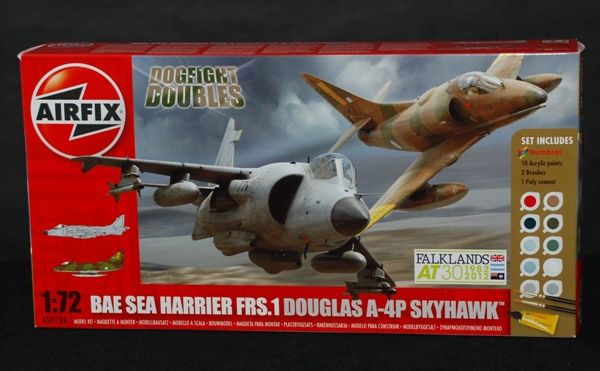 Our thanks to Airfix for supplying our review sample. Get this impressive Dogfight Double package here now at: www.airfix.com

Do check out your SMN Photo Reference Library where you’ll find a great detailed walkaround set of images all taken with the scale modellers in mind – some fantastic close ups of all the hard to get at areas like the cockpit and other areas of the Skyhawk airframe.

Finished Now – has a kit built!

It’s worth taking a good look at Finished now as SMN has builds of the various Airfix Harrier models – including a new-tool GR-7 – the tooling is very similar to this new FRS-1.

The Sea Harrier FRS.1 and FA.2

The British Aerospace Sea Harrier is a naval VTOL/STOVL jet fighter, reconnaissance and attack aircraft, a development of the Hawker Siddeley Harrier. It first entered service with the Royal Navy in April 1980 as the Sea Harrier FRS1 and became informally known as the “Shar”. Unusual in an era in which most naval and land-based air superiority fighters were large and supersonic, the principal role of the subsonic Sea Harrier was air defence from Royal Navy aircraft carriers.

The Sea Harrier served in the Falklands War, both of the Gulf Wars, and the Balkans conflicts; on all occasions it mainly operated from aircraft carriers positioned within the conflict zone. Its usage in the Falklands War was its most high profile and important success, where it was the only fixed-wing fighter available to protect the British Task Force. The Sea Harriers shot down 20 enemy aircraft during the conflict with one loss to enemy ground fire. They were also used to launch ground attacks in the same manner as the Harriers operated by the Royal Air Force.

The Sea Harrier was marketed for sales abroad, but by 1983 India was the only operator other than Britain after sales to Argentina and Australia were unsuccessful. A second, updated version for the Royal Navy was made in 1993 as the Sea Harrier FA2, improving its air to air abilities and weapons compatibilities, along with a more powerful engine; this version continued manufacture until 1998. The aircraft was withdrawn early from Royal Navy service in March 2006 and replaced in the short term by the Harrier GR9, now itself retired, although the intended long term replacement is Lockheed Martin’s F-35 Lightning II. The Sea Harrier is in active use in the Indian Navy, although it will eventually be replaced by the Mikoyan MiG-29K. 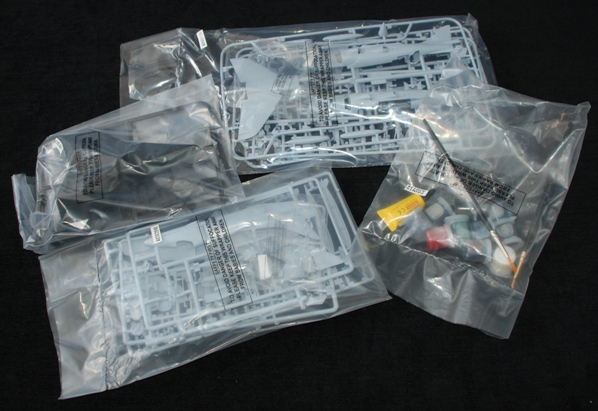 PIC 3 It’s genuinely fantastic to see a return of the famous Dogfight-Double series by Airfix – this time featuring new combinations of adversaries like the Argentine A-4 Skyhawk versus British Sea Harrier FRS-1 taking centre stage here.

As you can see, the box is crammed full of the two kits, decals, instructions and paints tubs plus glue because this is a Gift Set.

First impressions are good as this kit is an all-new tool and that is good news at any time.

Quality…
The sprues are full of well detailed, often very delicate parts that look very impressive. The panel line detail is quite fine, maybe slightly heavy for the scale but very presentable and sharp. Interestingly the panel line detail is slightly finer on this tooling than even the Sea Harrier FRS-1 that accompanies it; that’s also a recent tool but just goes to show that Airfix is getting better and better with many of their most recent releases. No flash to speak off visible and plenty of options for different stores load-outs; this is getting better all the time.

The inclusion of IFR probe, arrestor wire tail hook and delicate undercarriage, not to mention the three drop tanks all go to make an accurate-looking A-4 Skyhawk. The tyres in the Skyhawk kit are not weighted and this is probably a good idea mainly because they were kept inflated to high air pressures making any ‘bulging’ hard to pick out in some images.

The cockpit tub has decals for the main instruments and this is ideal in this scale, with an ejection seat that’s not bad that will be enhanced by the addition of a scratched or etched seat harness and ejection handles.

Options continue with airbrakes open or closed provided and again this is a nice touch.

Dropped wing leading edge slats…
These are a significant feature on most parked Skyhawk aircraft and it’s good to see that Airfix has provided these as separate parts. Even better would have been an option for dropped flaps too, but you can’t have everything! Especially in 1:72 scale…